Inexplicably, since at least 1881, the Church has ceded control of the identity of the Greek New Testament to atheist and liberal textual scholars. Enter RSR friend Alan Bunning and his Center for New Testament Restoration (greekcntr.org). Alan has assembled all the known handwritten manuscripts of the New Testament up to 400 A.D., transcribed the many that hadn't been transcribed, made these available to the world from his website, and created a computer program to collate the text. Significantly, Tyndale House has published a Greek New Testament using Alan's collation! If you would like to help further Alan's work, you can donate to the CNTR or contact him to volunteer if you have skills in transcription, computer or data science, database administration, web design, Greek linguistics, papyrology, or textual criticism.

* Caught Off Guard: "I was surprised at how fascinated I was by this interview! Thank you RSR and Alan Bunning!" -Nate from Golden, Colorado. Nate, thanks so much! You may also love RSR's program documenting the validity of full ending of Mark's gospel!

* On Demolishing JEDP with Umberto Cassuto: Dr. Peter Gentry helps RSR demolish the attack of the Documentary Hypothesis designed to undermine the authority of God's Word. It's been a pre-Cassuto and post-Cassuto world ever since the eminently qualified academic lectured at Hebrew University against the claimed four JEDP sources of Genesis and whole Pentateuch, that is, the alleged Yahweh, Elohim, Deuteronomist, and Priestly divisions of many of the chapters in the first five books of Moses.

* Another Resource: See the Institute for New Testament Textual Research at the University of Münster. Today's Resource: What We Believe & Why We Believe It (Blu-ray, DVD, or Video Download) This is our Christianity 101 series in eight parts... 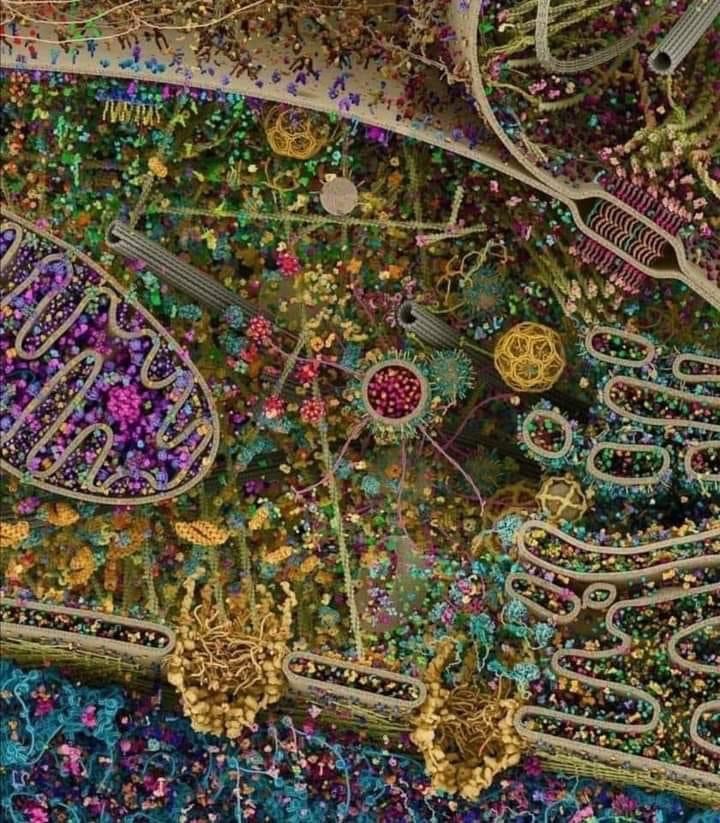 * Concluding our 2021 Carbon 14 Series: Years ago RSR was graded on our Carbon 14 presentation. To conclude our current series, we're re-broadcasting this assessment.

Note: If you approve of Pastor Bob's 95 (covid) Theses as at kgov.com/95 please consider commenting on the LifeSiteNews article about Denver Bible Church's posting of these on their own church doors!

Bob and Fred have more fun than should be allowed in chemistry class! Real Science Radio's Enyart and Williams start with a statement on Carbon-14 that ALL physicists agree with, and then they address an observation, made ALL over the earth, that most physicists really would rather not think about. (For our full written show summary see rsr.org/14c.) The guys talk about predictions regarding carbon 14 and other predictions regarding the ongoing Mars exploration. And they announce two new RSR videos, one of a strange object seen on the Martian landscape (well, just kiddin', but it's fun!) and the other answering the question, What is the Firmament of Day 2 in Genesis? Finally, the guys announce a special guest and a special program next week to conclude this series!

* 14c: Carbon-14 doesn't lie. It only lasts thousands of years and yet is plentiful in fossils and diamonds claimed to be millions and billions of years old. On today's program Real Science Radio's Bob Enyart  presents the work of an PhD from MIT in mechanical engineering, Dr. Wallt Brown.

* Telethon Ending: Please consider helping us down the final stretch! We're at $40,095 toward our telethon goal of $50,000 and anticipating a likely contribution of more than $10,000 from a Christian men's group in Canada hoping to help us meet our goal! So if you can in any way, please check out kgov.com/store or call us at 1-800-8Enyart (836-9278) to purchase our science resources, sign up for a subscription, or to make a one-time or monthly donation. Thanks so much!

* More about Carbon 14 Dating:
- Walt Brown answers How Accurate is Carbon Dating?
- Check out our own article at rsr.org/14c.

RSR's List of 14c Everywhere It's Not Supposed to Be Pt. 2

Carbon-14 doesn't lie. It only lasts thousands of years and yet is plentiful in fossils and diamonds claimed to be millions and billions of years old. Real Science Radio hosts Bob Enyart and Fred Williams continue their discussion of Carbon-14 by adding to 14c factoids, presenting our List of Carbon-14 Everywhere It's Not Supposed to Be, and then they take neutron capture and knock it out of the ball park (specifically, out of Denver's Coors Field)!

* The 2021 Version of an RSR Classic: Carbon-14 doesn't lie. It has a relatively brief life and yet is plentiful in fossils and diamonds claimed to be millions and billions of years old. Carbon-14 can't be an anomaly, because it's not here and there but it's everywhere it shouldn't be. This radiocarbon is so unstable that a solid ball of 14c the size of the Earth would all decay into nitrogen in less than a million years. Real Science Radio hosts Bob Enyart and Fred Williams begin today's Carbon-14 program by airing Bob's phone conservation from 15 years ago with Jurassic Park film advisor Jack Horner. Bob offered Jack $23,000 to carbon date the soft tissue T. rex that his team had recently excavated. (The 14c argument for a young-earth parallels the argument made from the 50 peer-reviewed scientific papers, listed at bflist.rsr.org, documenting the existence of still-soft dinosaur blood and many other examples of dinosaur biomaterial "fossils".)

We're adding "animal intelligence" to rsr.org/squeeze. The claim that apes should have the highest intelligence in the animal kingdom because we humans supposedly evolved from them turns out to be yet another fail. Did you know, for example, that certains species of birds demonstrate that they know what other birds are thinking? On today's Real Science Radio program Bob Enyart and Fred Williams discuss really fun and hugely significant examples of animal intelligence! Wait till you can hear what the lowly ant does! RSR thanks Answers in Genesis for publishing Dr. Joe Francis' article Smarter Than You Think which we've used as a framework for today's broadcast. Also, February is our annual telethon month and our goal is $50,000 so we can really use your help! We're only at a couple thousand dollars so far. So if you can, please check out kgov.com/store or call us at 1-800-8Enyart (836-9278) to purchase materials, sign up for a subscription, or to make a one-time or monthly donation. Thanks so much!

From kgov.com/definitions: These are RSR-styled...
- Animal: Excepting humans, a multicellular biological organism with specialized sense organs and voluntary movement.
- Mammal: A warm-blooded vertebrate animal with hair or fur, females that secrete milk, and, except for the platypus and spiny anteater, the birth of live young.
- Animal Kingdom: The animals of the world collectively, excluding insects and fish (which are more likened to biological robots than to volitional organisms)
- Human being: A person, made in God's likeness, with body, soul and spirit (whereas animals have body and soul)
- Plant: A biological organism that synthesizes nutrients in its leaves by photosynthesis (possessing a body but neither a soul or spirit).

* One minute video of a magpie perceiving what many apes don't:

Real Science Radio hosts Bob Enyart and Fred Williams let a platypus help them expose the List of Ways Darwinists Invent their Tree of Life. Evolutionists change their selection of what evidence they use to show 'lineage', from DNA to fossils to genes to body plans to teeth to many specific anatomical features to proteins to behavior to developmental similarities to habitat to RNA, etc. and to a combination of such. Darwinism is an entire endeavor based on selection bias, a kind of logical fallacy. By anti-science they arbitrarily select evidence that best matches whichever evolutionary story is currently preferred. Join in as Bill the Platypus shows the way and make sure to see the 20-second video below of him swimming around the RSR studio. :) 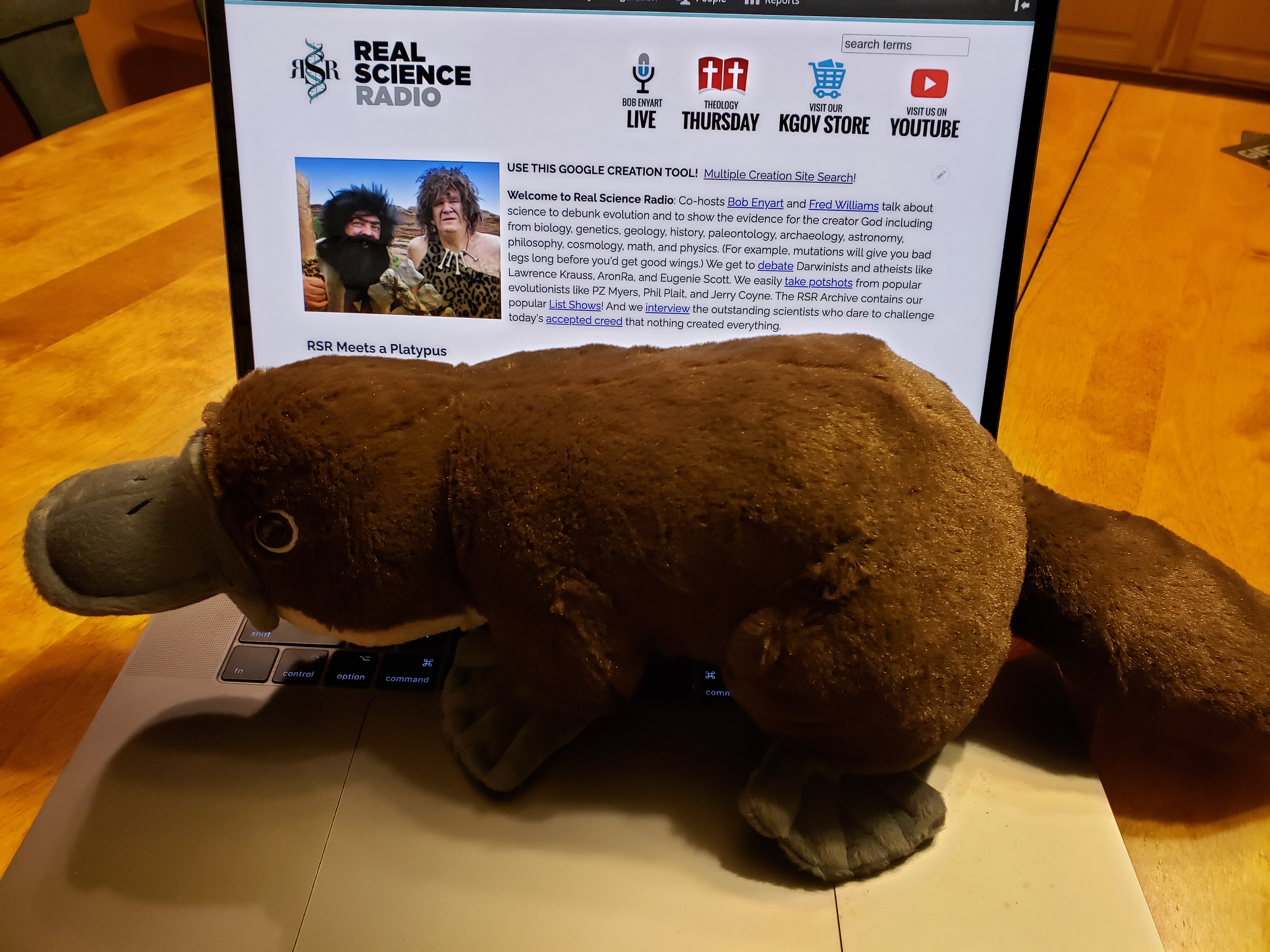 If one little baby ape, a long long time ago, had an especially helpful mutation, how long would it take before all apes inherited that single genetic improvement? Biologist Christopher Rupe (colleague of last week's guest, geneticist John Sanford) helps Real Science Radio get a better understanding of the science of population genetics. Bob Enyart asks Rupe about something called genetic fixation, about alleles, and the percentage of mutations that are beneficial. The discussion also asks, with the distribution of helpful mutations being exceedingly slower than a snail's pace, what is the pace of the accumulation of harmful mutations? Listeners will also learn about the test of the ape-to-man hypothesis, about how dissimilar chimp DNA is from the human genome, and why the Y chromosome should be the most similar but it is so wildly different that it's as close to a chick Y as a chimp Y!

* Stunning Talks: If we get a video of Rupe's college lecture, we'll embed it on this page. In the meantime, here's Chris' colleague, Dr. John Sanford, lecturing at NIH: