* It's a Blacktie Affair: A Bob & Doug extravaganza! A talent search to find the most qualified hosts to present KGOV's List of BEL Sayings settled on Doug McBurney and Bob Enyart. If you have a suggestion or if you find that a saying here predates Bob's program or is attributed to someone else, please email us.

"It's no longer a justice system; now it's just a system." more

"The death penalty is at the heart of the Gospel of Jesus Christ." more

"Regarding any 'lesser' evil, there's no bottom to that abyss." more 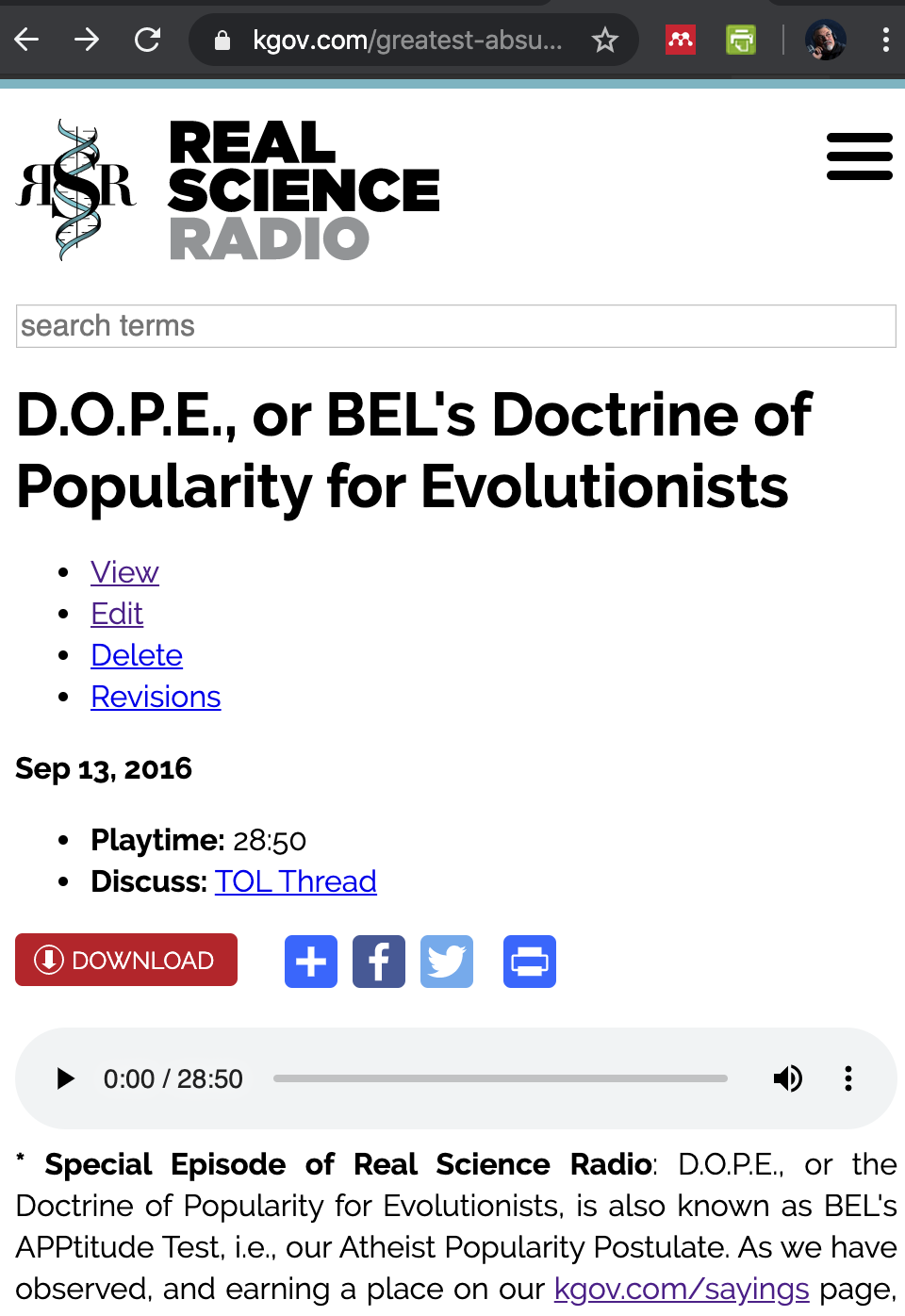 "The most famous atheist is the one who can say the greatest absurdity with the straightest face." more
"Ditto for evolutionists." more (and see a 2019 example below)

"Like evolving a vital organ, most major hurdles for evolution are extinction-level events." more

"Judge Rightly Is Not Some Guy's Name." more

"Everything is Christ centered, in humility before Him or rebellion against Him." more

"A rock can't make itself from nothing and a fire can't burn forever so the universe had to be created in the recent past." more

"Our murderer is always worse than their murderer." more

"Hollywood will never respect women off camera until they respect them on camera." more

"If the church in the past couldn't handle meat but only milk, today it's lactose intolerant." more

"In the public square, homosexuality and Christianity are mutually exclusive. One or the other will be criminalized." more

"Calvinists trust only God's inabilities, never His abilities." more [i.e., only immutability, impassibility, impecability, and not His freedom, love, and faithfullness]

"Deep within the dark soul of every evil tyrant lurks an HOA president." Selah. kgov.com/25-conspiracies#without

"There's no such thing as an End Times expert who isn't also an expert on the entire Bible." more

Asking someone who says, "God is everything", "Is He a child molester?" "No, of course not." "Then He isn't everything, is He." more

So, if Muslim male suicide bombers get seventy virgins, what do the females get? "They get to opt out of being one of the seventy."

"On Bob Enyart Live, we expose the liberal in the conservative." more
Also, as among our Select Definitions, "A conservative is a Republican trying to save a social program started by a liberal."

"When you teach people, wrongly, that God heals those who believe, if they later lose faith, that's partly your fault." more

"Methodological naturalism requires adherence especially if that means that getting the biggest questions completely wrong." more

"Every compromise on moral public policy is a victory for liberals and a failure for Christians." more

Asking someone who says, "Truth is unknowable!", "How do you know?" more

On why a kid in a park can't climb a tree (and the reason a thousand other good things can't happen), "Because there are too many lawyers, that's why." more

"Preaching the Gospel is a matter of national defense." more

"They never forgive the one they hurt." more

"The Bible is a criminal justice textbook." more

"Your public school is showing." more

"Don't get prayer into the public schools, get your kid out." more

"Don't be nicer than God." more

"Any law that ends with, And then you can kill the baby, is a bad law." more

"Fear is not without its victims." more (about COVID)

"ACLU, the Anti-Christ Legions of the Underworld, aka All Criminals Love Us." more

"Ending abortion would be a knife to the heart of liberalism." more

To his young sons hiking in the Rockies: "Pick up those cigarette butts and beer cans. You'll be cleaning up after liberals you're whole life so you might as well get used to it now."

"Open theism is not based on man's freedom but on God's freedom. God can write a new song, think a new thought, design a new flower. And that means that the future cannot be settled but must be open." more

Combining Calvinists and Arminians into a single camp: "It's the Settled View vs. the Open View. Whichever most exalts God is the correct view." term coined

"Arminians are too calvinistic for me. They believe the future has always been eternally settled. So to them, for example, whether your great grandchildren go to heaven or hell has been eternally and always unchangeably settled." more

"Calvinists conflate 'will' with 'ability'." more

"The Reformation broke with Rome but not with Greece." more

"Ironically, someday Calvinists will have no choice but to be open theists." more

J.O.N.A.H. "Jesus' Obvious Nativity Attributes Hermeneutic." more (A New Jersey BEL listener tells people who ask if his son Jonah was named after the book in the Bible: "No, he's named after a hermeneutic." :)

"The five biblical attributes of the eternal God are that He is living, personal, relational, good, and loving." more

"Relationships are the most important things in all of existence." more

"If the death penalty only applied to one family, let it apply to mine." more

"When the rules break the people break." more

"What came first to a blighted neighborhood, an abandoned home or a welfare check?" more

"Today, a conservative is a Republican trying to save a social program started by a liberal." more

During his reign, "Don't tell Obama what comes after a trillion. It seems impossible that a Republican administration can possibly keep up their party's record and outspend the Democrats. But, we have faith in the re-Publican Party!" more

"A Republican is a Democrat from twenty years ago." more

"A libertarian is an immoral conservative." more

"Democracy is the most divisive of all forms of government." more

"Of a billion expectant moms, none ever said, 'I hope it's a homo!'" more

"When homosexuality comes out of the closet Christianity is forced in." more

"The most wicked demon I've ever seen had Hillary in it." more

"The side in a debate that promotes it afterward may be the side that really thinks it prevailed." more

"Yes, they can be saved. Regardless though, Calvinists are intellectual reprobates." more

"The overview of the Bible is the key to its details!" more

[Is this new to BEL?] "Regarding fixing a socialist country, it's relatively easy to turn an aquarium into fish stew, but it's rather difficult to turn it back into an aquarium." more

"Women are worse than men at a thousand things but better at those that matter most." more

"Criminal matters come down to facts, truth, and justice, there is no process solution." more

"Evolutionists change their selection of what evidence they use to show 'lineage', from DNA to fossils to genes to body plans to teeth to many specific anatomical features to proteins to behavior to developmental similarities to habitat to RNA, etc. and to a combination of such. Darwinism is an entire endeavor based on selection bias, a kind of logical fallacy. By anti-science they arbitrarily select evidence that best matches whichever evolutionary story is currently preferred." more

"Because the laws of physics and chemistry have no symbolic logic functions, therefore no scheme, such as the genetic code, or visual encoding of data transmitted along the optic nerve to the visual cortext, can even theoretically evolve, even given infinite time." more

"Warning, warning, warning Will Robinson there are Bible verses up ahead. For those in the audience who advocate pluralism and diversity, we know here at Bob Enyart Live that you would like to censor anyone who would dare quote a Bible verse in public. So this warning gives you fair notice that raw unadulterated truth is about to be uttered." more

Lyrics (and music by Tony Funderburk!) for the KGOV Theme Songs:

Warning, Warning, there's truth up ahead.
It gets beyond all the headlines you've read.
Don't need lip service with a wink and a nod.
You need a man on a mission from God.
Well not to worry, here's Bob Enyart Live!

"This is Bob Enyart reminding you to do right and risk the consequences."

* Origin of the term "Settled View": The guy who back in 1980 coined the term "open theism" forty years later told Bob that he liked the "Settled View" term to sum up opposing theologies. As in his high profile 2005 debate with Knox' Prof. Lamerson, Bob Enyart has long spoken of and may have coined the rather obvious term, "Settled View". The netural term effectively describes and combines into a single camp major otherwise discordant theological systems (including Arminianism and Calvinism). All settled viewers oppose God being free and able to think new thoughts; that is, they oppose open theism. The term was apparently picked up by writers including Gregory Boyd (2006, 2008) and both William Lane Craig and David Hunt in 2013. Craig and Hunt write of "the so-called settled view" in the journal Faith and Philosophy referring to it primarily as the "SFV" which they quote from "Settled Future View" in the same journal from Rhoda, Boyd, and Belt, etc. The phrase has also been picked up notably by Chris Fisher of GodIsOpen.com, by various bloggers, tweeters, various posters, street preachers, random evangelicals (although they probably wouldn't refer to themselves that way :), and by popular authors, theology forum admins, and apologists.

conservative: A Republican trying to save a social program started by a liberal. kgov.com/conservatives

forensics: Historical science; investigation of the past whether criminal or not. more

If you think we should add some other BEL Saying or definition used sometime over the last quarter century, please email your suggestion to Bob@kgov.com. Thanks!  -The KGOV Crew

And you may want to check out kgov.com/got-a-million-of-em. :)

Memorable BEL Show Titles:
- I Love Animals; They're Delicious
- There's No Place Like Homophobia
- Liberals to Stop Using Toilet Paper
- Ramadanadingdong
- Gored or Bushwhacked
- O'Really? O'Reilly
- Love the Gin, Hate the Dinner
- Time shall be no more? When's that?
- The Silence of the Damned
- Are You Sharia 'bout That?
- Pharaoh Baracktut Obamankhamun

- etc. Feel free to suggest a saying for the list above or a
title to add to this list, via an email to Bob@kgov.com.
We haven't yet scanned the titles from 2002 to 2018, so
if you'd like to help with this, you can skip the shows prior
to 2002 but in our archives review the show titles since.
Thanks!

* Other Sayings Often Heard on BEL:
"It's not what I don't know that's so bad; it's what I know that isn't so." -Author Unknown (to us)
"Love must be freely given." 1966, Frederick Buechner (BEL's proof of this: "By definition, obedience must be freely given. Likewise, God commands men to love, and if they are to obey, they must do so freely.")

"That's like rearranging the deck charis on the Titanic." more (Is this a BELism? Bob started saying this frequently on air starting in 1991.)

* Example of Bob's Saying: This Ellen McHenry cartoon illustrates Enyart's saying, "The most famous atheist is the one who can say the greatest absurdity with the straightest face. Ditto for evolutionists." From ScienceDaily and the Journal of Geology, Did ancient supernovae prompt human ancestors to walk upright? A paper in the Journal of Geology makes the case. Supernovae bombarded Earth with cosmic energy starting as many as 8 million years ago, with a peak some 2.6 million years ago ... 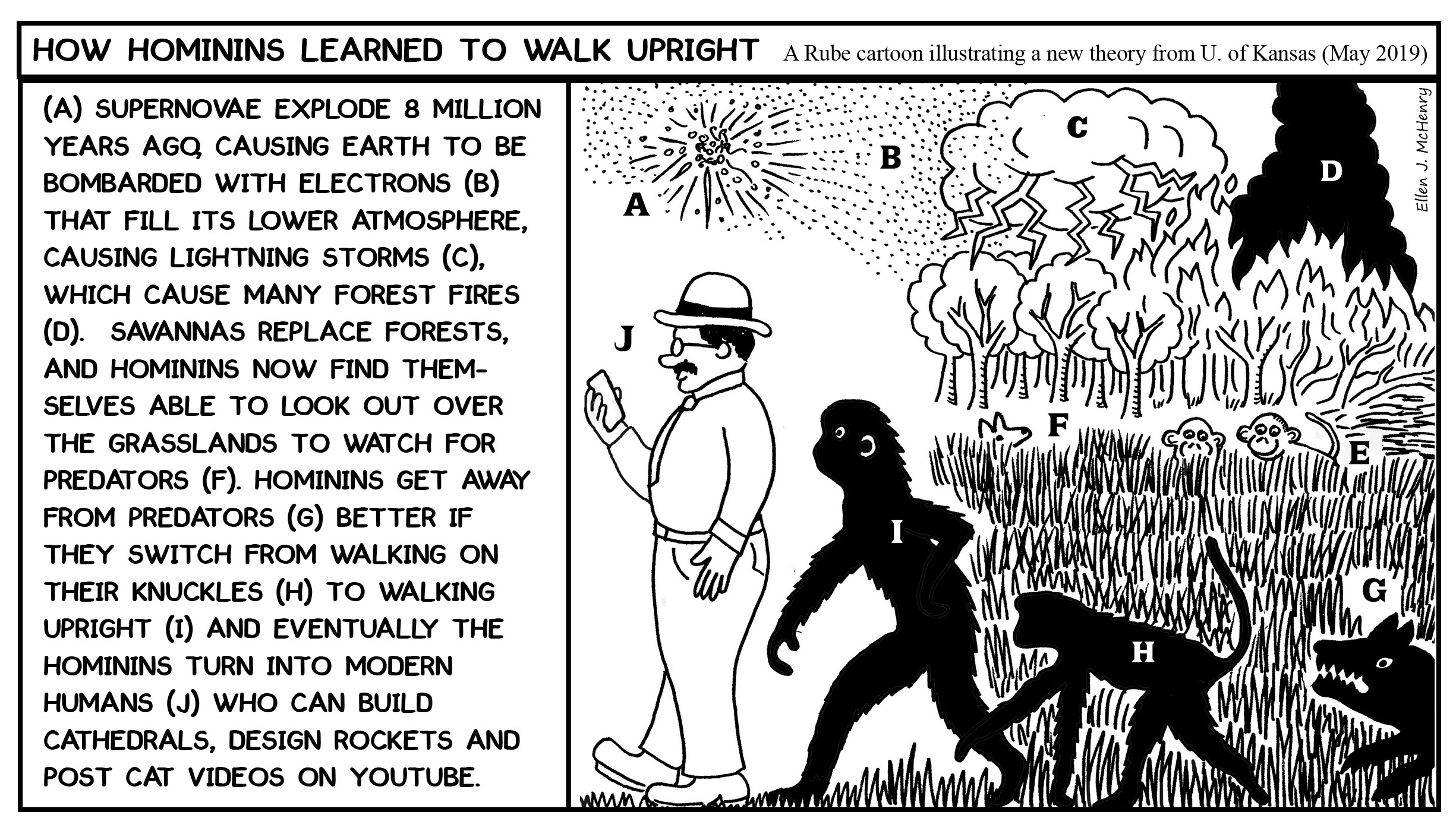 * Today's Resources: You're invited to check out our powerful BEL resources at store.kgov.com!

ThThurs: The Book of Isaiah Pt. 7

Not so Civil War