* Broadcasting James White's Open Theism Debate: With all the ways that BEL is distributing this debate, including over at opentheism.org, we are praying that more than 100,000 people will be edified by this historic event!

* October 2017 YouTube Screenshot: Note, the various YouTube videos of this debate and the podcasts and web downloads, etc., have multiplied the 100+ in-person audience to now over 50,000 people who have seen this debate! 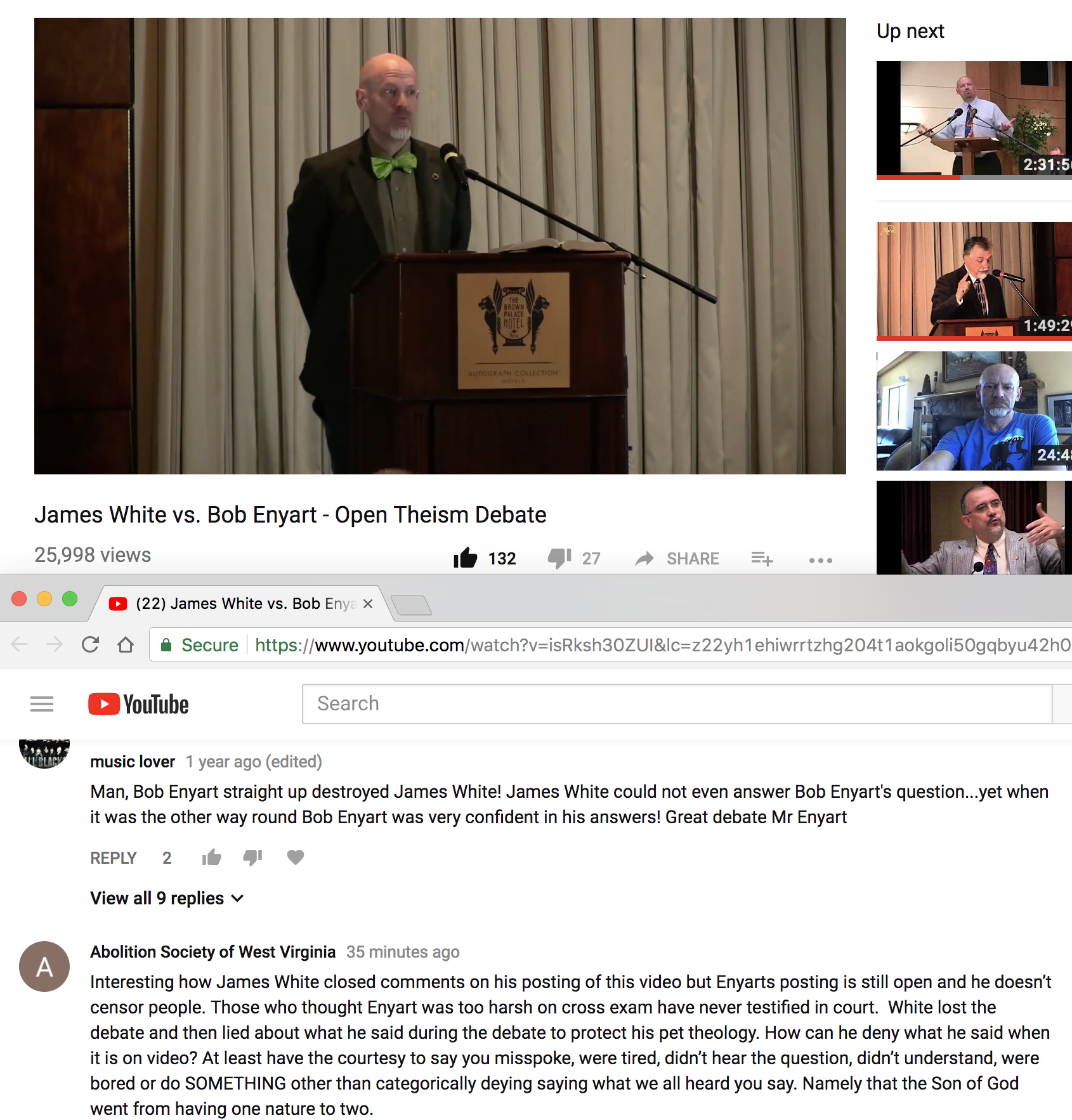 * James White Says God Could Not Have Delivered Jesus from Calvary: Bob Enyart asked James White whether or not his Calvinist doctrine accepted the Lord's assertion that, "Do you think that I cannot appeal to my Father, and he will at once send me more than twelve legions of angels?" Rather, by his Calvinist doctrine (and for that matter, by the Arminian settled future), James answered that the Father could only have delivered Jesus in that way if He had eternally decreed it. The debate organizer, Will Duffy, demonstrates how far this position goes:

What's more, by the Calvinist and Arminian doctrine of the settled future, unless it had been predetermined and/or foreknown, God cannot do an almost endless number of even the simplest of tasks. For by their philosophical belief system, God could not even lift a pebble, if such a task had not been foreknown. So if He did not foreknow/predetermine Himself to lift a pebble, then God, as they conceive Him to be, literally does not have the ability to do so. Consider though the God of open theism. Jesus said in Matthew 3:9, "God is able to raise up children to Abraham from these stones." Yet by the settled future doctrine, this would be false in the same way that James White denies the Lord's assertion in the Garden of Gethsemane. -Will Duffy

Some open theist debate opponents (like Will Duffy's opponent Jaltus) even have a hard time admitting that God ever had freedom, even the freedom to decree otherwise, even before the foundation of the Earth. Yet other opponents, including many Arminians, and Calvinists like James White, admit that God did have actual freedom before the foundation of the Earth, the freedom to predetermine, one way or the other. So we ask, for what would God have traded away His own freedom? As it says atop the OpenTheism.org website, "We can trust God with free will." Surely also, God could trust Himself with free will. No?

* The Full Debate: You can watch (or listen) to the full debate right here:

* Today's Resource: Check out the format and perspective that's most helpful to your desire to evaluate these issues. At our KGOV Store: we have presentations on DVD called Chosen: It's Not What You Think, on Open Theism, on Predestination & Free Will and a moderated P&FW Debate! Also, you can get the P&FW seminar in an audio format on a single MP3 CD). You can also call 1-800-8Enyart (836-9278) to order or to talk with us about which of our DVDs, books, or CD audio teachings may interest you!