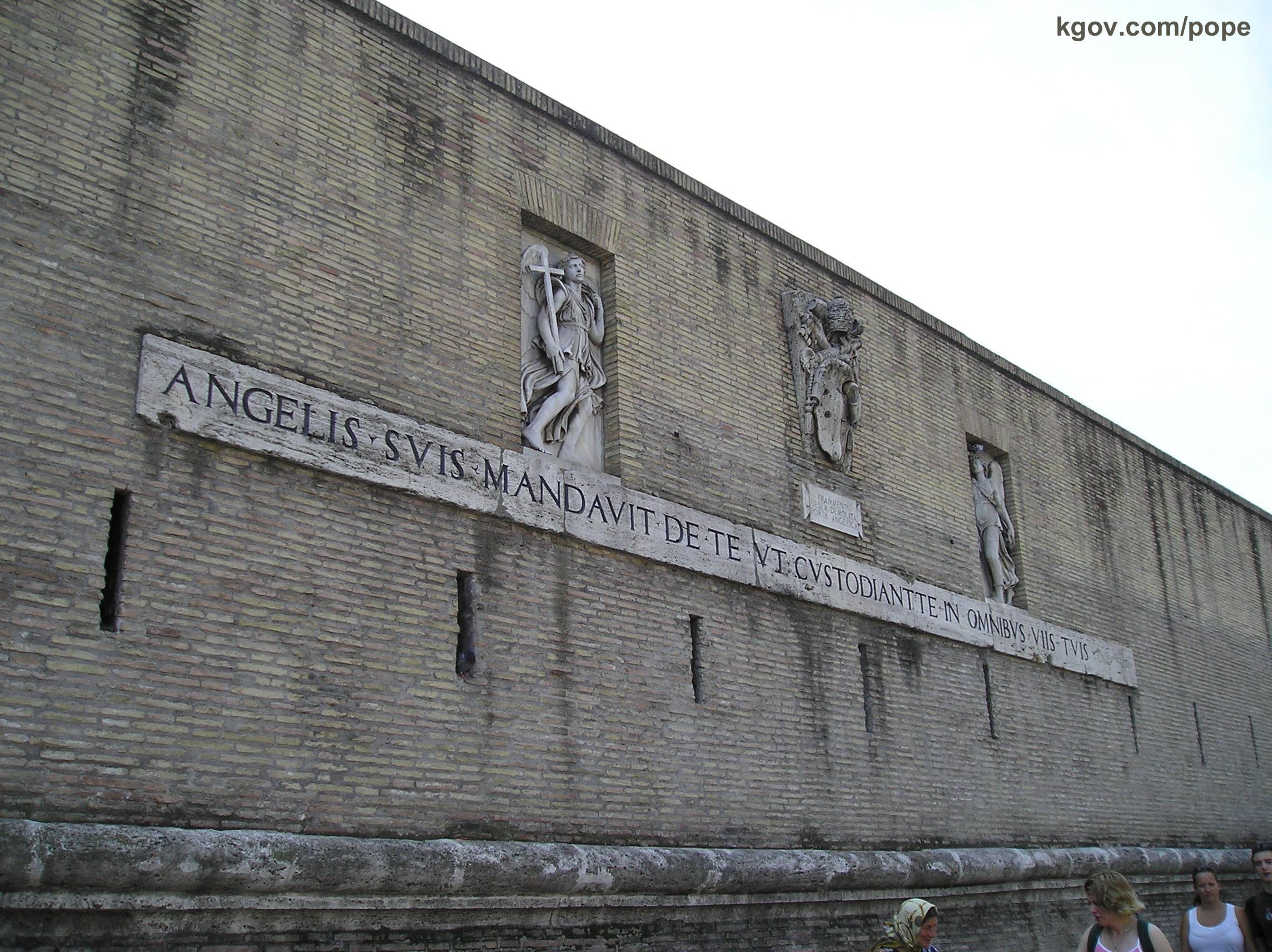 * Italy Recovering: Begiining at seven minutes into today's broadcast (which airs on America's #1 most powerful Christian radio station), American Right To Life spokesman Bob Enyart debriefs Fred Williams on our just-completed Bible Tour of Israel: When in Rome, Do Romans. Regarding the unholy Roman Catholic Church which was on full display during our trip, hear about:
- the arrests at the Vatican of Ken and Jo Scott (see below)
- the Vatican hypocritically using a wall to keep out illegals and unwanteds
- how the Vatican daily treats their thousands of visitors like animals
- the profligate wealth somehow accumulated through a vow of poverty
- how they eliminated the second commandment, "Thou shall not make for yourself a graven image"
- the constant adoration of men including bishops and popes
- the official word from the Roman Catholic Church that they don't know where Peter's wife is buried (and don't care)
- the paintings and statues of naked men that surround the Pope
- the unbiblical requirement of celibacy when even Peter was married
- Michaelangelo's own guilt in the #MeToo and priest molestation scandals
- the Pope thinking the crisis is in the demand for justice rather than in the decades of priests raping boys
- and that the more one has to lose in this life, the harder it is to care about what he may lose in the next.

In Italy They Say You Can’t Protest the Pope

But when Denver Bible Church visits Rome, that’s just not the case. The state police told two members of this American congregation that it is illegal to “vilify” the Pope. However, by rejecting corroborated accusations and by exalting a bishop previously censured for having sex with seminarians, Pope Francis has vilified himself.

During a Bible Tour of Italy called When in Rome, Do Romans (led by ARTL spokesman Bob Enyart), Ken and Jo Scott protested outside the walls of the papacy where thousands visiting the Vatican saw the message, in English and Italian, on their signs. Pope – Repent – Resign.

The worldwide suffering caused by thousands of homosexual Roman Catholic priests raping children has even hit this small Colorado church. Years ago a DBC family lost a loved one when Stuart Saucke committed suicide after leaving behind a handwritten letter (see it at kgov.com/saucke). Stuart wrote about the Denver Archdiocese priest, Fr. Neil Hewitt, who got him drunk as a young boy, exposed him to pornography, and severely sexually molested him. Another Hewitt victim, Michael Smilanic, now of Florida, traveled to Denver for a radio interview with DBC pastor Bob Enyart (kgov.com/smilanic) to add his voice to the cries for justice against the Catholic Church. The Denver Archdiocese followed the worldwide systematic process of covering up accusations of child molestation by moving a predator priest to a new parish filled with unsuspecting families. Denver’s previous and current archbishops, Charles J. Chaput and Samuel J. Aquila, over many years have dodged and outright refused to answer the questions, asked in private at the archdiocese headquarters and publicly on the radio, by these families regarding what accusations had been leveled against Hewitt, who has since left the priesthood, during the years when the bishops were moving him around Denver and into the Leadville mountain parish. 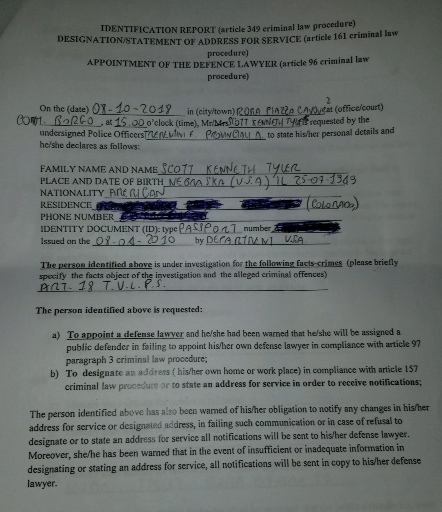 The rebuke of the Pope appeared to shock the crowds said Jo Scott. However, “Except for those who seemed to be officials, no one expressed disapproval, not even among the Vatican’s visitors many of whom must have been Catholic. And we got a lot of support from the locals and others.” Otherwise, said Ken, the first ninety minutes of the protest were quiet. “Until the police showed up.” On that Monday afternoon, October 8, 2018, “Vatican workers came out to confront us and called the police. That brought nine officers who pulled up in three police cars.”

“For twenty minutes, half in Italian half in English, the police were trying to explain to my husband why we couldn’t be there and asked him if we had an attorney.”

“And they said, ‘No, a local attorney.’ But the funny thing was that all that time, they were holding our signs for us and we noticed that folks passing by seemed amused that the police were holding signs that said, ‘Pope – Repent – Resign.’”

Inside Vatican City in St. Peter’s Basilica other DBC members asked the tour guides, “If Peter is buried here, where is his wife buried?”

The New Testament records that Jesus healed Peter’s mother-in-law and that while Paul traveled with Barnabas, Peter would travel with his wife. So if Peter were the first Pope, that alone would falsify the teaching that priests, bishops, and popes must be unmarried.

Further, the Apostle Paul wrote in two epistles that the qualifications for church leaders, including for bishops, is that they be the “husbands of one wife.” Examples of dysfunction related to the widespread sexual perversion among Catholic leaders (as discussed at kgov.com/pope) include that the Vatican is overflowing with artwork of naked men, and the clergy’s vow of celibacy.

Outside, the police asked the Scotts for their protest permit, which they did not have, and for their passports, which they did have. Three officers brought Ken with them, sirens blaring, in one police car, and three others brought Jo in another. “They don’t need those sirens,” one officer said to Jo, who presumed that the officers were just helping add to the spectacle. While being processed for their arrests, Ken and Jo noticed that an officer had placed their protest signs in the police station window over a public square making them easily readable by those walking by. “All and all, the police protested longer than Jo and I did,” said Ken.

Though threatened with being charged with vilifying the Pope, in the end the Scotts were charged with the process “crime” of protesting without a permit. Asking when they would have to go to court, an officer said, “In some years.” “Years?” Jo Scott asked. “Si. Our system is not so good.”

* Also from Today's Broadcast: Pocahontas genes, the lion's teeth, and what education doesn't do. In Italy, even though their regulations require placement of horrifying images on the face of their cigarette packs, Italians smoke at a rate ten percent higher than the U.S. rate (and even here, nearly a half-million Americans die annually from smoking-related cancer). Real Science Radio hosts Bob Enyart and Fred Williams discuss dandelion seeds and the new discovery of the astounding way that they fly, and the guys talk about Pocahontas being 1/1000th American Indian while Enyart's own kids and Williams' own kids are 100% native American!

* Get Smarter! When Googling, you can likely increase your own knowledge, understanding, and even your research effectiveness by using RSR's Multiple Creation Site Search! Save time. Find truth. Enjoy