* On Mormons: Bob Enyart and Doug McBurney interview Lynn Wilder who taught young people preparing to be Mormon missionaries. Hear Dr. Wilder's encouraging testimony of the power of God to save even someone even from the depths of a cult. (See also kgov.com/cults.)

* The Pro-Abortion Mormon "Church": See also all the excuses the LDS church offers for the intentional dismemberment of unborn boys and girls, at ProlifeProfiles.com/Mormonism. Also, consider that the false teaching of the Book of Mormon regarding one of its central claims, that pre-Columbian American Indians were primarily of Jewish ancestry, has been falsified.

See also:
- Part 2 of Bob's Interview with Lynn Wilder
- Secret Recording of Bob Enyart talking to Mormons
- Bob's interview with Mark Cares, Speaking the Truth in Love to Mormons
- Bob's interview with Matt Wilder of Adam's Road
- Screenshots from the official Mormon "church" website listing the kids they say you can kill
- Bob's interview with Brannon Howse on David Barton and Mitt Romney
- Bob debates an ex-Mormon polygamist
- Brigham (liked-'em) Young and so did Smith (just below)
- Coins and monetary units, every coin in the Bible has been excavated whereas the fake monetary units in the Book of Mormon of course have never been confirmed
- The BEL program, What Mitt Romney's Mormon Relative Says
Bonus: Here are some notes from that BEL program, What Romney's Mormon Relative Says:

* Bill Keller, Gregg Jackson & Bob Enyart: These three Christian activists present some of the uglier aspects of Mitt Romney's Mormonism including the cult's longtime claim, as reiterated by Marion Romney at the LDS General Conference, that Mormonism uniquely teaches that God the Father was once a man who grew up on a planet similar to Earth. Weird and heretical.

* God the Father was Once a Man said Brigham Young: Not speaking of the incarnation of the Son but speaking of the Father, LDS president, prophet, and successor to Joseph Smith, Brigham Young, said, "The idea that the Lord our God is not a personage of tabernacle [body] is entirely a mistaken notion. He was once a man. Brother Kimball quoted a saying of Joseph [Smith] the Prophet, that he would not worship a God who had not a Father... He [God] once possessed a body, as we now do..." -President & Prophet Brigham Young, Journal of Discourses, Vol. 9 see exmormon.org

* More Brigham Young: "...the Father of Heights... Yes, he was once a man like you and I are and was once on an earth like this, passed through the ordeal you and I pass through. He had his father and his mother and he has been exalted through his faithfulness, and he is become Lord of all. He is the God pertaining to this earth. He is our Father." -President & Prophet Brigham Young, 14 July 1861 see exmormon.org

* Mormon Prophet and President Lorenzo Snow:
Again, not speaking of the incarnation but of the Father, Snow said, "I had a direct revelation of this. ... If there ever was a thing revealed to man perfectly, clearly, so that there could be no doubt or dubiety, this was revealed to me, and it came in these words: "As man now is, God once was; as God now is, man may be." - President & Prophet Lorenzo R. Snow, Unchangeable Love of God see exmormon.org

* Mormon "Church" President Equivocates: LDS president Gordon Hinkley in an interview with the San Francisco Chronicle lied and then equivocated...
Q: There are some significant differences in your beliefs. For instance, don't Mormons believe that God [the Father] was once a man?
A: [Lying] I wouldn't say that. There was a little couplet coined, "As man is, God once was. As God is, man may become." Now that's more of a couplet than anything else. [And equivocating] That gets into some pretty deep theology that we don't know very much about.
Q: So you're saying the church is still struggling to understand this?
A: Well, as God is, man may become. We believe in eternal progression. Very strongly.

* Brigham (liked-'em) Young and so did Smith: Some early Mormons denied that their earliest leaders were polygamists and it was claimed that Brigham (liked-'em) Young introduced the practice. Young had 55 wives. He married ten teenagers while in his 40s including 15-year-old Clarissa Decker when he was 42 and 16-year-old Lucy Bigelow when he was 45. Also, from age 41 to age 66, Young married 23 women in their 20s. Finally in 2014 the Mormon "church" acknowledged that their founder Joseph Smith had up to 40 wives (some historians put it at 49), taking single and even married women. The church claims that some of these marriages were without physical relations, which they would seeing that Smith's youngest bride, Helen Kimball, was only 14, the marriage listed by Smith's own clerk as one of the women the founder married in early May 1843. Helen would later write:

[My father] asked me if I would be sealed to Joseph … [Smith] said to me, 'If you will take this step, it will ensure your eternal salvation & exaltation and that of your father's household & all of your kindred.['] This promise was so great that I willingly gave myself to purchase so glorious a reward.

Lorenzo Snow, mentioned above, the fifth president, 1989 - 1901, only had nine wives, though a number of them were teenagers half (and much less than half) his age.

Recall that the Koran includes Mohammad's warning to his first wife that she faced eternal punishment for objecting to him lying with the young Coptic servant girl whom, allegedly, "Allah" had "made lawful" to him, so too, Joseph Smith dictated a similar warning to his first wife Emma in the founder's "inspired" Doctrine and Covenants. And we see above that though 14-year-old Kimball wasn't threatened she was similarly manipulated nonetheless.

* Mitt Romney's Second Cousin Once Removed: "...like begets like [i.e., reproduction after its kind; an organism begets similar organisms] and that for the offspring to grow to the stature of his parent is a process infinitely repeated in nature. We can therefore understand that for a son of God to grow to the likeness of his Father in heaven is in harmony with natural law... This is the way it will be with spirit sons of God. They will grow up to be like their Father in heaven. Joseph [Smith] taught this obvious truth. As a matter of fact, he taught that through this process God himself attained perfection. From President Snow's understanding of the teachings of the Prophet on this doctrinal point, he coined the familiar couplet: "As man is, God once was; as God is, man may become." This teaching is peculiar to the [LDS] restored gospel of Jesus Christ." -Elder Marion G. Romney, General Conference, October 1964 see exmormon.org

* No Cities, No Money: Archaeologists and historians have confirmed the existence of scores of biblical cities. However, the No true Scotsman informal fallacy notwithstanding, not a single one of the 38 cities mentioned by Joseph Smith in the Book of Mormon have been recognized by any notable secular historian or archaeologist. And while every coin in the Bible has been found and documented, none of the monetary units described in the Book of Mormon have ever been found.

* Mormonism Falsely Claims that Indians are Jews: One of the central historical claims of the Book of Mormon, as stated in its introduction as late as 1981, is that Jews were "the principal ancestors of the American Indians" and that would include the Aztecs, Incas, Mayans, Navajos, etc., are Jews. This false teaching states that some Jews left Jerusalem by ship in about 600 B.C. and built a great civilization in the Americas. Also wrongly about the Americas, "The whole face of the land had become covered with buildings" (Mormon 1:7) including with “fine workmanship… in machinery, and also in iron and copper, and brass and steel, making all manner of tools” (Jarom 1:8; 2 Nephi 5:15) with “silks… oxen… cows… sheep… horses… donkeys… elephants…” (Ether 9:17-19) and "shipping and their building of ships, and of synagogues" and “swords… shields… head-plates… armor…” (Alma 43:18-19; Ether 15:15). None of this is true.

* The Lembas: An African tribe, the Lembas, have long been believed to be descendants of the Jews, for they circumcise, keep the Sabbath and the dietary law, and in their DNA they possess the Jewish genetic marker, being perhaps the descendants of King Solomon and the Queen of Sheba. DNA research shows that American Indians are not related to the Jews, nor closely related to any Semitic peoples or the descendants of Shem, but rather, that they are primarily of Hamitic stock, from Asian people, having migrated to the Americas not by sailing the Atlantic but by crossing the Bering Straight.

* Genetics Confirms Actual Biblical Relationships: In contrast to genetic predictions based on the Bible, those based on the Book of Mormon fail. Regarding the origin 4,000 years ago of people groups descended from Abraham, Dr. Jonathan Sarfati quotes the director of the Human Genetics Program at New York University School of Medicine, Dr. Harry Ostrer, who in 2000 said:

Jews and Arabs are all really children of Abraham … And all have preserved their Middle Eastern genetic roots over 4,000 years.

This familiar pattern, of the latest science corroborating biblical history, continues in Dr. Sarfati's article, Genesis correctly predicts Y-Chromosome pattern: Jews and Arabs shown to be descendants of one man.

As expected, genetic science does not reinforce but rather contradicts Mormon claims. The obvious falsehood extends beyond genetics to culture, religion, and history. Contrariwise, because the Judeo-Christian Scriptures are true, mountains of evidence corroborate their historic claims. Regarding Jewish priests, Dr. Sarfati adds to the above that, "These Jews have the name Cohen, the Hebrew for priest, or variants like Cohn, Kohn, Cowen, Kogan, Kagan, etc." and that, "Even today, it is possible to identify the Levites, because they have names such as Levy, Levine, Levinson, Levental..." 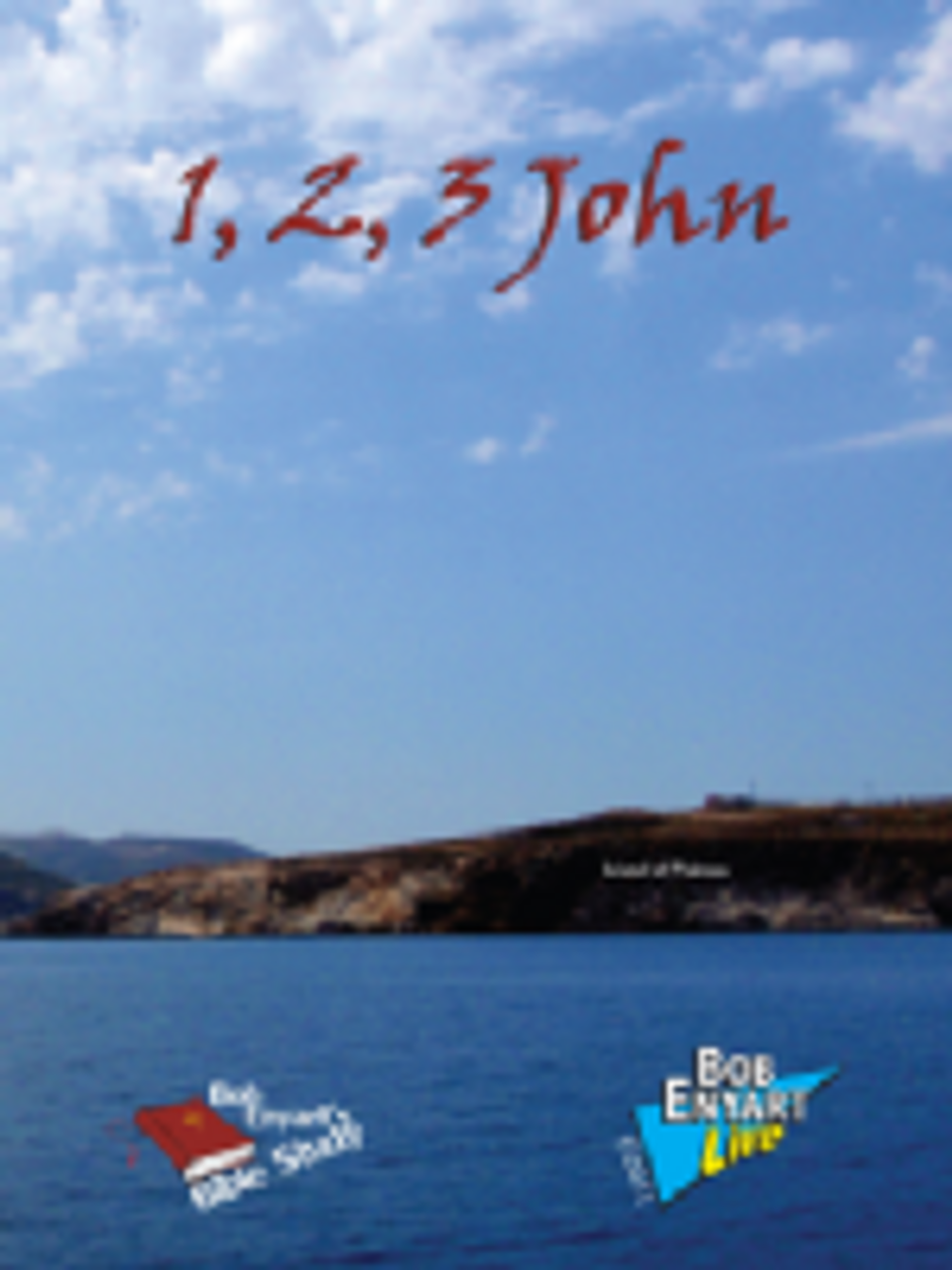 * If You Fear Obama, You'll Vote for Romney; If You Fear God, You Won't: Don't fear Obama. Fear God, for that is the beginning of wisdom! Besides, Obama is Romney-lite. And because Romney has already implemented policies that are so destructive that Obama only dreams of accomplishing such things, therefore, a vote for Romney is a vote for Obama.

Today's Resource: Meet the Apostle John. He was the youngest of the Twelve. And at the time of this writing, he's now one of the last remaining. If you were an eyewitness to Christ's earthly ministry, what would concern you decades after the resurrection? From the battles that John fought we can learn lessons that will help us as we ourselves fight for the truth and battle false teaching within the church. By looking at "the things that differ," we can know what details in John's three epistles applied to the circumcision believers of his day and which of his teachings apply directly to us. Available on this 4-DVD Video Set and also in audio on MP3-CD or MP3 Download.

* THE CONCLUSION OF THE MATTER: Make sure you don't miss Part 2 of Bob Enyart's great interview with former BYU professor Lynn Wilder.