Don Johnson on Programming of Life 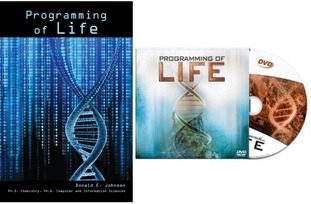 *  Don Johnson on RSR re: the Book: Real Science Radio host Bob Enyart interviewed Dr. Don Johnson who earned  Ph.D.s in both Computer & Information Sciences from the University of Minnesota and in Chemistry from Michigan State University and has been a senior scientist in industry and taught at universities in the U.S. and Europe. Dr. Johnson has produced simply the greatest cell biology DVD ever made: Programming of Life! On today's program, Bob and Don discuss the book behind the DVD. And check out the conclusion of today's interview in Part 2.

For this show, RSR recommends
Dr. Don Johnson's Programming of Life DVD
and as a free gift
we'll send along the accompanying book!

* Analyzing the Great Works of Literature -- Via Spelling: Debating RSR, atheist AronRa claimed that the study of evolution (to Darwinists, this means, the study of all life) is primarily an investigation among species of the different frequencies of alleles (which are differing versions of genes). This is as insufficient an approach to understanding life as it would be to attempt to comprehend the great works of literature by focusing on spelling variations.

*  One Dead Protein : Bob Enyart points out that even if a trillion universes all pulled together to overcome the odds of a protein forming and folding by chance, and natural processes produced the first protein... so what? All you'd have is a single, non-living protein molecule.

* Don Explains Where Miller and Urey Went Wrong: On our previous interview, Dr. Johnson discussed the infamous duo's experiment. To summarize, here's a quote from Bob Enyart's letter to the Colo. Springs Gazette: "One misleading Denver Museum of Natural History exhibit headline, referring to the 1952 Miller/Urey synthesis of amino acids, reads: Replicating Life in the Lab? It’s been sixty years! Don’t they know if they made life yet or not? Their question mark is insufficient to counterbalance this false report, since amino acids are essential to biological life, but they are not life, they are acids."

* More Don Johnson: Other RSR programs with Dr. Johnson include:
- Part 2 of today's program for the conclusion of this interview!
- RSR: Best Cell Biology DVD Ever Made!

*  RSR's Dinosaur Soft Tissue Page! By popular demand, Real Science Radio presents all of our evidence for the existence of dinosaur soft tissue on a single web page at rsr.org/soft titled:

* Bob Presents the Hydroplate Theory in Denver Oct. 11th: Archived Notice. Bob Enyart invites you to join him at Denver's Rocky Mountain Creation Fellowship this coming Friday, Oct. 11th at 7 p.m. to see Bob's presentation on Dr. Walt Brown's Hydroplate Theory on creation and the global flood! Call 1-800-8Enyart to order this on DVD or Blu-ray!