* RSR Interviews Dr. Walt Brown: Real Science Radio's Bob Enyart interviews Dr. Walt Brown on the accepted dogma of plate tectonics which theory claims that the crust of the earth has broken up into many plates which allegedly subduct under each other causing earthquakes, volcanoes, and those amazing ocean trenches. None of that, however, is true.

* RSR's Flood Landing Page: All of our global flood resources (interviews, articles, book, videos) are collected for you in one place, at rsr.org/flood.

* Many Leading Experts Agree: There is tremendous observational evidence in the vicinity of the ocean trenches that contradicts the subduction claims of plate tectonics. On today's program, hear from the world's leading plate tectonics experts openly admitting the extreme contradiction between their theory and the actual ocean depths! And if you've heard of marine geology expert Chris Smoot, you're in for a treat because RSR here publishes this summary of his work by our friend Ellen McHenry!

* The Atlantic vs. the Pacific: Even superficially, plate tectonics theory does a poor job of explaining the extreme differences between the ocean basins on the opposite sides of the globe. In the Atlantic, vast swaths of the seafloor show exposed mantle, as tens of thousands of square kilometers of the earth's crust (inexplicably, by plate tectonics) is missing there. Meanwhile, in the Pacific, tens of thousands of square kilometers of crustal rock is buried deep below the ocean floor. The Pacific basin is deeper than the Atlantic, contains almost all (16) of the ocean trenches, and holds 40,000 tablemounts, that is, submerged volcanoes at least one kilometer in height. Unlike plate tectonics, the hydroplate theory explains all these differences beautifully and directly.

* Why Plates Have Not Subducted: See Dr. Brown's chapter on the Origin of Ocean Trenches and his Subduction Table 4 on the evidence against subduction. See this fascinating list of evidence falsifying the plate tectonics theory! Man's humanist alternative to God's Word is unreliable.

* Example List of Geologists Rejecting Plate Tectonics: Some of the old-earth geologists listed here were identified through New Concepts in Global Tectonics and creationists from rsr.org/wb-hpt#supporters...

Feel free to send thoughts and suggestions to Bob@rsr.org.

* Why Seafloor Spreading is Not Happening: Search for the word "spreading" on three pages of Dr. Brown's website, HydroplateOverview3, Trenches3, and Trenches5, and see also Magnetic Variations on the Ocean Floor, and endnote 67 about the Curie Point under the Mid-Oceanic Ridge. 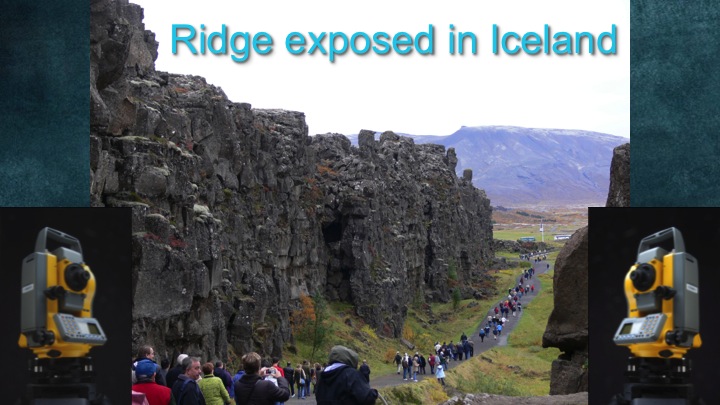 * Total Stations and Interferometry Devices Could Prove Ridge Spreading: Either with interferometry devices or Total Stations, within days, plate tectonics advocates could measure and thereby prove the claimed ridge spreading, especially in easily accessible Iceland. They don't. A report published by Stanford's National Accelerator Laboratory states, "A few years ago the most accurate total station distance meters, after extensive calibration, could approach 1mm. Today, certain Leica total stations achieve 0.1mm right out of the box. [Consider the] differences between distances measured with four [Leica] TC2002s and [Stanford's SLAC] interferometer [which reduces] the measurement standard deviation from 73 to 52 microns [millionths of a meter]." Walt Brown discussed with J. Tuzo Wilson, one of the fathers of plate tectonics, the failure of geologists to measure ridge spreading, and Walt also had such discussions in his many meetings with Bob Dietz (who coined the term seafloor spreading).

2014 Update: To find out more, you can pre-order Bob Enyart's The Global Flood and the Hydroplate Theory DVD by calling 1-800-8Enyart.

* MEASURE THE DISTANCE from the slain to the city: Not one to miss an opportunity to remind people of America's corporate responsibility to protect children from being dismembered by Planned Parenthood abortionists, Bob Enyart wants to remind you that the Bible teaches us to "measure the distance" from a murdered body to determine which is the nearest town, and whichever town that is, God will hold them corporately responsible for that murder. Why? Because He expects those who fear Him to maintain a safe and secure society. See the relevant Bible passage in the show summary at Bob's interview titled, "Measure the distance" with T. Russell Hunter.

* The Secular Consensus on How the Plates Originated: None. "Fifty years after the foundational works establishing the geometries, kinematics, and mechanics of plate tectonics, we still lack a consensus understanding of how the plate tectonic system initiated" (Nature Communications, July 2020).

Old-earth scientists also have no consensus on how the crust formed. As one minor example, for which physicist Lawrence Krauss on RSR offered a partial explanation, why didn't heavy elements all sink to the core during the alleged hundreds of millions of years when the Earth was molten? Krauss claimed that uranium was originally evenly distributed but being a large atom, it floated toward the surface. The bias of this physicist led him to forget, apparently, that it is density, and not size, that causes things to float. Even denser than gold, uranium is one of the most dense elements (excluding atheists themselves and other manmade phenomena). See morea bout this at rsr.org/radioactivity where we also explain the only creationist theory based on observational science as to why radioactivity is concentrated in the continental crust and mostly around granite!

* What Starts Supposed Mantle Convection? Paraphrasing an email from an RSR friend, when plate tectonics advocates describe deep rock, under great pressure, being visco-elastic so able to move like a plasma, that in no way serves as an explanation of what would power such movement. Mantle plumes are claimed to power mantle convection, and those plumes are claimed to originate at supposed hot spots on the core. But the latest understanding of liquid iron undermines the ability of such hot spots even to originate, and the claim that mantle plumes exist, or even can exist, is under fire. The properties of liquid iron include its surprisingly rapid thermal conductivity. This suggests that convection may not even occur in the core, at least not sufficiently to power a "dynamo", which is the materialist's explanation, so far not demonstrable in a lab, for starting and maintaining a magnetic field over billions of years. Regarding mantle convection, the properties of a material (gas, liquid, solid, plastic, etc.) do not equate to an energy explanation of what would be powering its movement.  Convection is a type of movement that occurs with heat transfer. But if there is no plausible energy source, then convection is an unworkable plate tectonics mechanism. If mantle convection occurs, it has to be a result of differing levels of heat throughout the material. If the heat throughout any particular region has evened out, as heat tends to do, then convection will not occur. So because convection proponents rely on hot spots in the liquid outer core to initiate plumes, the rapid thermal conductivity of liquid iron suggests that their hypothesis lacks a mechanism. Again, if the outer core is super conductive (i.e., it distributes its heat very quickly) then it cannot generate a large hot spot. No hot spot means there is no means for material to raise in a local area to start convection in the mantle. A hot air balloon won't rise without a significant temperature differential. And even worse for the theory, the claimed rising hot spot plume would have to overcome the fact it is twice as dense as the mantle material that it is supposed to be rising up through. If a balloon's gas is twice as dense as the air around it, it can't rise.

Today's Resource: The Hydroplate Theory & Walt Brown On the Air presents eleven 30-minute radio shows that aired on the most powerful Christian radio station in America, Denver's AM 670 KLTT! Hear Dr. Brown explain the Hydroplate Theory, and hear his great insights on the origin of the grand canyon, limestone, where the water went after the global flood, and on the theory of evolution. Hear also a Q&A session with Bob Enyart answering callers related questions. And enjoy Kevin Lea, hydroplate expert, on the origin of comets and about the frozen mammoths, earthquakes, and the origin of our 365-day year. Finally, Fred Williams and Bob present Walt's extensively researched hypothesis on the origin of Earth's radioactivity. (Oh yeah, and you'll LOVE Dr. Brown's book, In the Beginning! Gotta get that!!)

In Denver? If so, you're invited to join Bob attending Friday night's Rocky Mountain Creation Fellowship at 7 p.m. to hear Wayne Spencer on Rethinking Planetary Science!

Jan. 22, 2013 Update -- Why Relatively Few Craters on Earth? At that RMCF meeting, Wayne Spencer rightly disagreed with those creationists who claim that many of the impacts on the Moon, Mercury, and Mars, occurred during the creation week. Spencer argued that such impacts marred these originally created heavenly bodies and that their impactors were destructive. So he suggested instead that the impacts would have hit at the time of the global flood. The question was raised, though, why the Earth, so much larger, would not have been equally bombarded, even though the Earth has an atmosphere and so would have burned up the small impactors. Bob mentioned to the group that because it was covered in tumultuous water and because the surface was being reworked by the floodwaters, liquefaction, and enormous tectonic activity, many lesser impact scars would have been erased. Also, the absence of meteorites from deep in the sedimentary layers of the geologic column, as Walt Brown points out, and the fact that the largest lunar impacts hit what is today the near side of the moon (creating the maria), argue against eons of impactors hitting the Earth, and mitigate against them hitting the Moon from random directions. Finally, from Dr. Brown's Hydroplate Theory, "rocks carried much more momentum than water droplets, so their trajectories were less deflected by... boundary layers. Therefore, few rocks (and very few larger rocks) fell back to Earth."

* Zircons Challenge Plate Tectonics and Radiometric Dates: (from rsr.org/squeeze) Zircons radiometrically dated 4 to 4.4 billion years old would have had to freeze (form) when the Earth allegedly was in its Hadean (Hades) Eon and still molten. Geophysicist Frank Stacey (Cambridge fellow, etc.) has suggested they may have formed above ocean trenches where it would be coolest. One problem is that even further squeezes the theory of plate tectonics requiring it to operate two billion years before otherwise claimed. A second problem (for these zircons and the plate tectonics theory itself) is that ancient trenches (now filled with sediments; others raised up above sea level; etc.) have never been found. A third problem is that these zircons contain low isotope ratios of carbon-13 to carbon-12 which evolutionists may try to explain as evidence for life existing even a half-billion years before they otherwise claim. For more and references see this at rsr.org/squeeze-zircons.

Today's Resource: The Hydroplate Theory Special! You may want to purchase this set of resources if...
1) You'd like to read the best creation book ever written and watch its accompanying videos
2) You like Real Science Radio and want to help it stay on the air
3) You'd like to give the gift of understanding creation and the flood to someone who could really benefit from it.