* RSR Nye/Ham Debate Analysis Pt. 2: See just below for our constructive criticism of the creation movement's longstanding disparagement of "historical" science. But first, Bob Enyart and Fred Williams answer the claims Bill Nye made in his debate with Ken Ham. The Real Science Radio hosts answer Nye's many wild claims with specifics and show how he repeatedly used claims to back up claims, instead of evidence to back up claims. And we are thankful that Ken Ham put the debate in it's proper biblical context, that his scientific evidence was up-to-date and powerful, and that he shared the gospel with millions of people! See also Part I and Part 3 of this analysis and our pre-debate interview with Ken Ham. 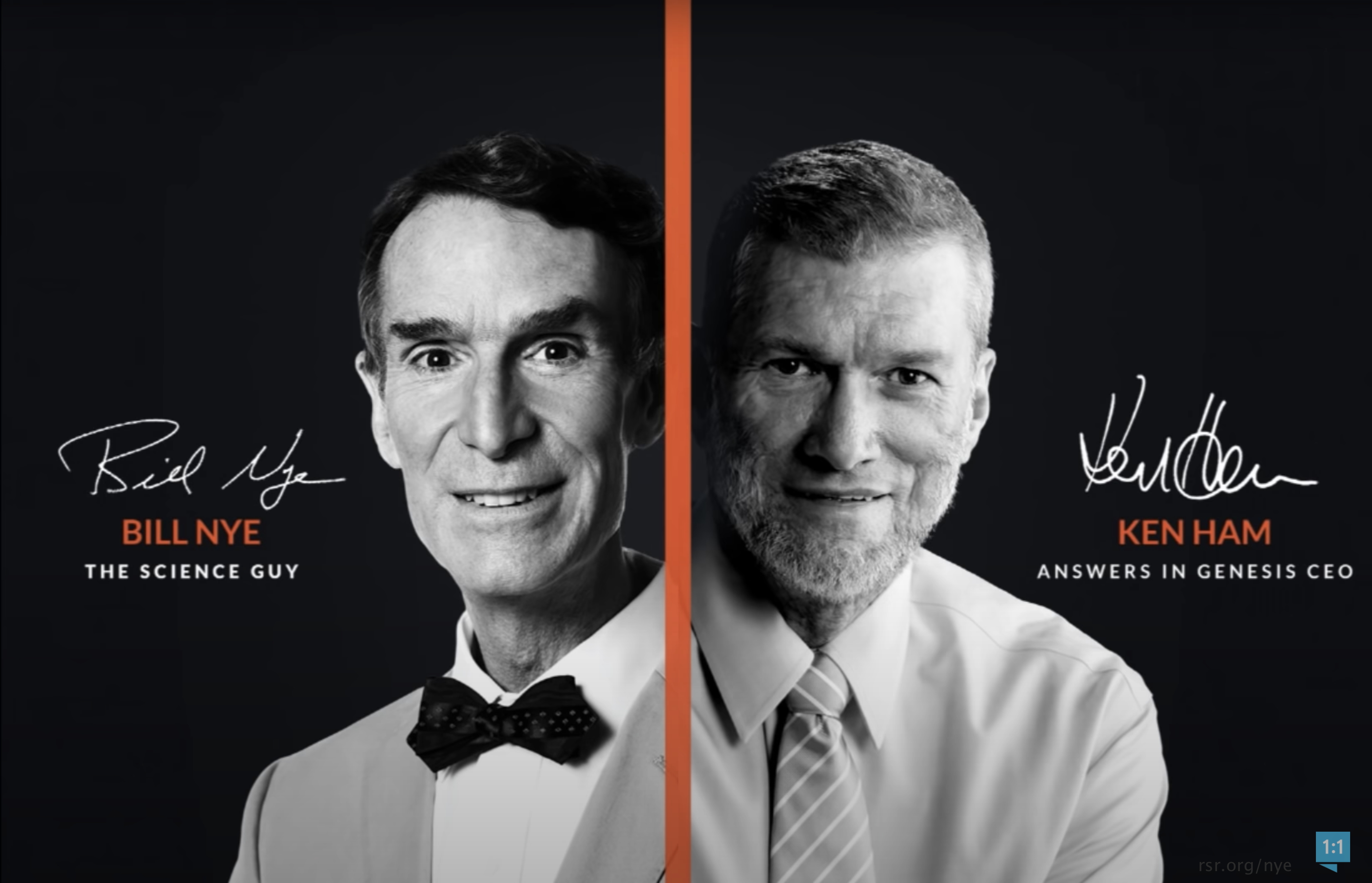 Please help RSR reach our telethon goal
of $25,000 to stay on the air for 2014!
Either browse our Science Department or
make a one-time or automatic monthly donation!

Test Our Analysis: Atheists often make the materialist claim that: we can only be certain of what our five senses tell us. We assert that many creationists make a similar error when they try to relegate forensics to a second-class science. In so doing, they are backing into the traditional demarcation problem, trying to decide what does and does not qualify as science, perhaps without carefully considering the implications of their claims. We invite you to test this analysis to see whether or not we easily falsify this claim about forensics. In CMI’s article by wonderful creationist Shaun Doyle, note both the distinction between “present” and forensic science, and the use of quotes around the word science:

Real Science Radio asserts this claim is overly broad and therefore incorrect. As a summary of the general creation opposition to forensics, the excerpts below list all the justifications provided by Doyle. Many events in the past (such as sun flares, the distribution of a genetic mutation, volcanic lava flows, etc.) can have far more certain descriptions and explanations than can any number of explanations for phenomena scientists observe in action. Note that CMI’s reasons for diminishing forensics apply equally to "observational" science:

A Fatal Arbitrariness: Creationists are arbitrary in attributing such concerns to forensic science as though they do not apply also to other science. As a result of this arbitrariness, the argument is meaningless because the exact same body of evidence can be used to argue the exact opposite, that forensic science provides greater certainty than observational science, which claim of course would also be false. Anecdotally, forensic science has even corrected eyewitnesses who identify the wrong suspect in a lineup.

Past and Present: Is it a trivial matter to distinguish between the historical and observational aspects of an astronomer using a telescope? How about a geologist reading a seismograph? Qualitatively and epistemologically, how great a difference is there between those kinds of investigations and microscopy? If we are attempting to be precise, then to what degree is our routine scientific investigation of ongoing processes actually a forensic task? Forensics is the study of the aftermath of phenomena. Much of our observational science and even our experimentation is actually observations of the aftermath of phenomena. In Ken Ham’s great debate with Bill Nye, the creationist used precious time to distinguish between observational and historical science. So if that distinction is not the significant factor that many creationists make of it, then why do so many make that argument, and where does it come from?

Proving Things Present: Some influential creationists who believe that it is impossible to prove anything historical then take the next step and claim that you cannot prove anything in the present either. A couple examples: A leading creation homeschool textbook, authored by a friend of Real Science Radio no less, states that, "Science cannot prove anything... there is no way that science can prove anything." And the founder of a leading apologetics ministry (whom we once debated), states that by the scientific method, we "cannot be certain about anything in an absolute sense. ...its method never allows certainty." However, it appears that this extreme claim that science "cannot prove anything" is really just an accidental hyperbole by those who confuse something with everything. Knowing something absolutely does not equate to knowing everything. We do not have to be omniscient to know certain things absolutely. For example, the scientific method has revealed that the solar surface is hotter than the lunar surface, that electromagnetic opposites attract, and that light travels faster than sound. Yet, since the present is only an immeasurable instant from the past, doubting that we can prove anything historical leads to the belief, even among creationists who then mimic relativists, that nothing can be proven whatsoever such that we really cannot know, absolutely, anything, perhaps not even our own existence. 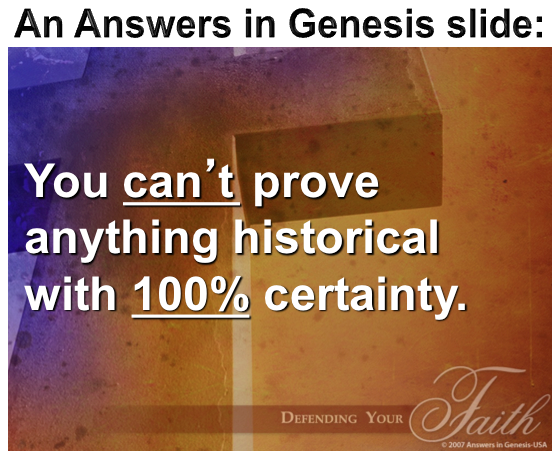 Proving Things Historical: Kirk Johnston is the atheist curator of Denver's Museum of Nature and Science. Real Science Radio spoke with him in front of a journalist for the Colorado Springs Gazette and dozens of homeschoolers and their parents. (See rsr.org/denver-museum-curator-kirk-johnston-might-not-exist.) At the children's' eye-level, an exhibit claimed that fish scales evolved into human teeth. Asked about the truth of this, Dr. Kirk Johnson answered a question with a question by quoting Pilate: "What is truth?" Having heard many atheists make the self-refuting claim that truth does not exist, and yet looking for common ground and trying to get this atheist to admit to the existence of at least some truth, we asked, "Dr. Johnson, do you exist?" The Darwinian curator answered, "I don't know." We then said, "Dr. Johnson, you intuitively fear God and so you are refusing to admit that truth exists because you know where truth will lead you. Truth will lead you to the God of truth." Since that was exactly where Dr. Johnson did not want to go, he threw an intellectual tantrum by implying that it was just possible that he might not exist. But cogito ergo sum so that the very act of doubting one's existence proves the opposite. Some claim though that proofs are only possible in mathematics. But then we ask, Do mathematics exist? If you cannot prove that the discipline of mathematics exists, then we might as well also throw out the notion that anything mathematical can be known with 100% certainty. Regarding historical certainty, did the world exist prior to today? Did the Bible exist prior to this very moment? If you think that you cannot prove that you, the reader, existed yesterday, then your uncertainty would be reminiscent of the relativistic atheism of Kirk Johnston. If someone has difficulty with the concept of being able to prove with a certainty that human beings existed a moment ago, the difficulty lies with that person's confusion over what it means for something historical to be proven, and not with the clearly seen certainty that humanity has existed.

more... (for the rest of the RSR article, Creation Movement Wrong on Historical Science)

Does God Exist? Vol. I - DVD or Download
See evidence for the existence of God.