Not Vestigial (including whales' "leg" and "pelvic" bones) 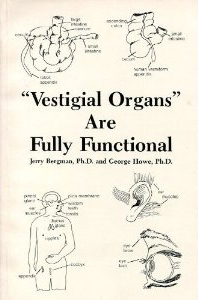 * RSR's List of Whale Evolution Problems: This program is part of our definitive series that begins over at rsr.org/refuting-whale-evolution-claims.

* RSR with the Most Prolific Creationist Writer: Real Science Radio's Bob Enyart interviews Dr. Jerry Bergman, author of Whale Evolution: A Whale of a Tale. Dr. Bergman's degrees include Ph.D.s from the University to Toledo, Bowling Green, and Wayne State University. He has authored hundreds of published papers and articles and many books, including Slaughter of the Dissidents, Vestigial Organs Are Fully Functional, and his latest, Hitler and the NAZI Darwinian Worldview.

* Do Whales Have Vestigial Pelvic Bones? Dr. Bergman is an expert on the fanciful history of a llegedly vestigial organs and their fading support for Darwinism. Read Dr. Bergman's whale article to see that scientists have not been able to confirm that whales have vestiges of leg or pelvic bones; and neither do their fetuses have leftover teeth either. Related: In an informal debate at rsr.org/eye, a University of California ophthalmology professor made a vestigial argument for the evolution of the human eye, which Dr. Bergman helped Bob Enyart to rebut.

* Land-Dwelling Rodhocetus Strangely Continues in Whale Ancestor Role: The discoverer of Rodhocetus, Dr. Philip Gingerich, wanted it to be a whale ancestor and so he drew it as a marine creature with flippers and a fluked tail. Now that enough of the skeleton has been discovered to accurately identify it as a land dweller, dramatically different from what qualified it as a reputed whale ancestor, regardless, the evolutionists insist on keeping it in the whale's lineage. Apparently, it's too big to fail. In a videotaped interview with RSR friend Dr. Carl Werner (see rsr.org/whale-evolution-problems), Rodhocetus discoverer Gingerich now says:

"I speculated that it might have had a fluke [whale-like tail], I now doubt that Rodhocetus would have had a fluked tail." [And regarding the imaginative whale-like flippers he had included in his reconstruction of the partial fossil, Gingerich also admitted] "Since then we have found the forelimbs, the hands, and the front arms of Rodhocetus, and we understand that it doesn't have the kind of arms that can spread out like flippers on a whale." -Dr. Philip Gingerich in Evolution: The Grand Experiment

* Perhaps Whales Evolved from Bats? Far more significant than the best evidence claimed for the famed Indohyus to be the land-dwelling ancestor of the whale, i.e, it's "thickened knob of bone in its middle ear", is the identical echolocation sequences in bats and whales (see Li, et al., 2010, Current Biology)! One wonders why Ying Li didn't try to become famous by claiming that the racoon-sized Indohyus ear bone thicked by convergence, whereas far more significant is the echolocation clade that shows that the closest organism to the whale is the bat!

* A "Vestigial" List Circulating in 2019: Science Alert published an article that was "first" published by Business Insider, 9 useless body parts that humans no longer need, that was "first" published by Gizmodo. Except there it was 10 Vestigial Traits. Apparently, trying to sell readers on the claim that they didn't need their Sinuses was a nose-bridge too far. Just as RSR raised $34,000 on Kickstarter toward launching a leading flat earther into space, we're considering raising money to offer to the Business Insider writer Peter Lotecki to have those nine of his own body parts surgically removed. You can hear Bob Enyart and his Mondays co-host Doug McBurney laugh about all this as they remind people of the incredibly important function of the appendix and the plica semilunaris (which topic came up in Bob's debate with a professor of opthamology from the University of California, over at rsr.org/eye). Generally speaking, evolutionists are not the brightest bulb in the lamp and in 2013 according to Science, immune system research has provided "the strongest evidence yet that the appendix serves a purpose" and, ha, it turns out (if Darwinism were true) that this useless organ (long insisted to be useless, anyway) evolved independently more than 30 times! And see Bob's belated comment, awaiting approval, over at Gizmodo...

* Left-wing Slaughter of Those Who Think Differently: Dr. Bergman has published online the names of 3,000 scientists and professors who reject secular Darwinism to varying degrees, (out of the hundreds

of thousands of Darwin Doubters who are scholars, doctors, and Ph.D.s in various fields of science). Yet, undoubtedly motivated by fear of opposition, Bergman documents in his Slaughter of the Dissidents how the Darwin marketing reps manage to ruin the careers of, and even fire, the scientists who question Darwinism. (This very day, a close friend of RSR and scientist at a major state university system has been threatened with firing within a week of getting published in a leading, secular peer-reviewed scientific journal. His crime? His outstanding work calls into question the methods used for claiming that the Earth is 4.55 billion years old.)

Today’s Resource: Getting the BEL Science Pack, learn and have a great time, support Bob Enyart Live, and save a lot of money, all at the same time! You can consider our BEL Science Pack and enjoy:

And have you browsed through the entire Science Department in our KGOV Store? Check out especially Bob’s interviews with a great scientist in Hydroplate Theory & Walt Brown On the Air! You’ll also love the superb kids radio programming, Jonathan Park: The Adventure Begins! And to order any of our BEL and 3rd-party resources, just call us at 1-800-8Enyart.

* Post-show Update: Even the male Y chromosome is considered vestigial by politically correct, feminized evolutionists and going extinct (as claimed by a RSR debate opponent AronRa). Yet as explained by CMI's Dr. Rob Carter, "we have learned that the Y chromosome is a master control switch, affecting genetic expression of thousands of genes on all the other chromosomes. Its effects are so profound that it makes the difference between men and women."

WHY did the left flip on lab leak possibility?

thefauci, the neurologist, and the gvt agent at dbc