The Origin of Language

* Origin of Human Language: Real Science Radio hosts Bob Enyart and Fred Williams discuss the expert evolutionists whose research and conclusions disprove Darwin's own theory of the evolution of language from animal grunts to human speech! Bob and Fred celebrate Dr. Jerry Bergman's article, Evolution and the Origin of Human Language! For example Darwin has been proved wrong in his belief that:
- some languages are 'primitive' (Famed writer and thinker "Stuart Chase bluntly stated that 'stories about tribes with only grunts and squeals are biological fakes'" and P.A. "Gaeng concluded 'Any hope, therefore, of discovering the specific origin of language from the languages of primitive groups must also be abandoned.'")
- animal grunts can be shown to be steps toward language
- and that evidence of language evolution would exist.

Instead, as Bob and Fred present the conclusions of some of the world's leading linguists such as Yale's Edward Sapir and MIT's Noam Chomsky, primitive languages do not exist and no evidence of the evolution of language has been found! Human language is another great argument in favor of creation and against evolution. Also, the hope of some evolutionists (a naive, Pollyannish hope) that a single dramatic mutation switched on the human ability for language is disproved by today's knowledge that our language interface is spread out geographically across regions of the brain, and also, as summarized by Bergman, humans require, "a complex set of biological capabilities, including not only the mind, but also the nervous system, the entire oral-nasal-pharynx design, and many accessory structures such as the teeth, tongue, lips, nasal cavities, larynx, lungs, uvula and nose." Thus, "Our putative closest relatives, the chimpanzees, are physically unable to produce speech." Bergman draws from D. K. Harrison's, Oxford Press 2007, explaining that an animal species relies "on a single system of communication; humans use one or more of the almost 7,000 different extant language systems, from English to Swahili," so that "whereas animal species possess an innate set of oral responses" i.e., genetically programmed, "children usually require several years to acquire their specific language..."

Bergman then presents the lesson of a life's work: "Chomsky concluded from his lifelong research on this subject that no evolutionary transition exists between the noises that animals make and human speech." And consistent with biblical history, "some scholars believe that all languages can be traced back to about a hundred language groups" and, "the oldest known written language, Accadian [aka Akkadian, Acadian, etc.]," was spoken in the Middle East. Human language is another great argument against evolution and supporting creation.

* RSR - Languages II: Hear the conclusion on next Friday's program!

* 15% of BEL February Telethon: Help Bob Enyart continue to present news from a biblical perspective and broadcast the truth of God's Word to thousands and thousands of people hungry to know Jesus Christ and His principles. The KGOV staff is thankful that so far, our listeners have given 15% of our $20,000 goal to keep Bob broadcasting through 2009! Please give online or by calling 1-800-8Enyart! Please help!

Today's Resource: You may just LOVE the resources at store.kgov.com! For our February BEL Broadcast Telethon, save $20 on any two Bible Study albums for a gift of $50 (normally $69.98) and save more than $50 on any four BEL resources (including The Plot, etc.) for a gift of $100 to help Bob Enyart stay on the air for another year! You can browse our online KGOV Store to select the titles you are most interested in, and then please call 1-800-8Enyart to order, or send a check to Bob Enyart Live, PO Box 583, Arvada CO 80001. Also get the second month FREE if you sign up for any of our Subscription Services (like our BEL Televised Classics), and SAVE up to $150 if you mention the telethon to get 10% off our Enyart Library (one of everything!), the BEL Audio Library, or the BEL Video Library!

...the Sumerians were... the first to create that civilization which the Babylonians had inherited.

Whence did they come? It is hard to say. [RSR: only because of bias against Genesis.] Their language cannot with certainty be connected with any of the known families. ...one and the same term k u r was used by them to designate... a "foreign land." And it is quite natural that a people inhabiting plains and lowlands should associate the idea of a "mountain" with that of a "foreign land." [RSR: Including of course Ararat.] In the Egyptian script, the character signifying a "foreign land" has the likeness of a mountain. The same association of ideas is to be found in the Sumerian script where, for example, the "slave" is represented by an ideogram consisting of two elements, of whom the one signifies a "man" and the other one a "mountain"; to the Sumerians the slave was "the man of the mountain," that is "the stranger." This example and other ones, which may easily be produced, show that at the time when they formed their script, the Sumerians were already since long inhabitants of the plains. All this goes to show that Sumerian civilization was not imported but grew out of its soil.

The Sumerians called their country K e n g i. By that term they designated the southern half of the territory which became later Babylonia. The other half, which they called U r i or K i - u r i, was, since the beginning of the historical times, inhabited by a people speaking a Semitic tongue, who had received their civilization from the Sumerians. Hence the North and the South were opposed to each other, not by their civilization but by their language. [RSR: Think of the Tower of Babel.] In the second quarter of the third millennium, a Semite of the North, SARGON the First, king of the town of Accad, consolidated the two countries under his sceptre and became the founder of the first strongly unified empire. The probability is that the practice of designating the Semites of the North by the name of "Accadians" goes back to that dynasty. ...

It seems certain that the Sumerians were the first Asiatic [RSR: Hamitic] people to rise to the stage of a civilization based upon the knowledge of writing. Their culture, remarkable by its homogeneity and originality... has... penetrated into our times and our life. 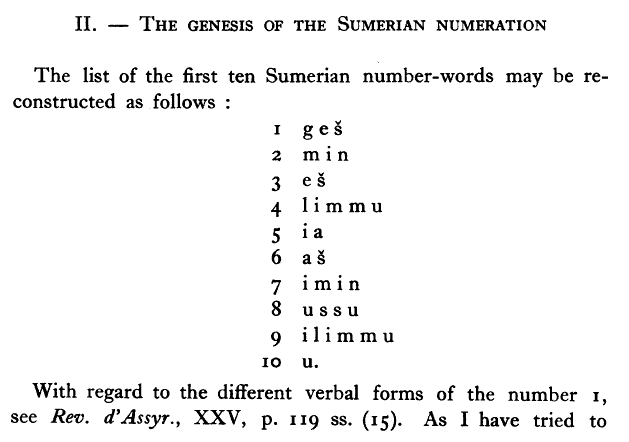 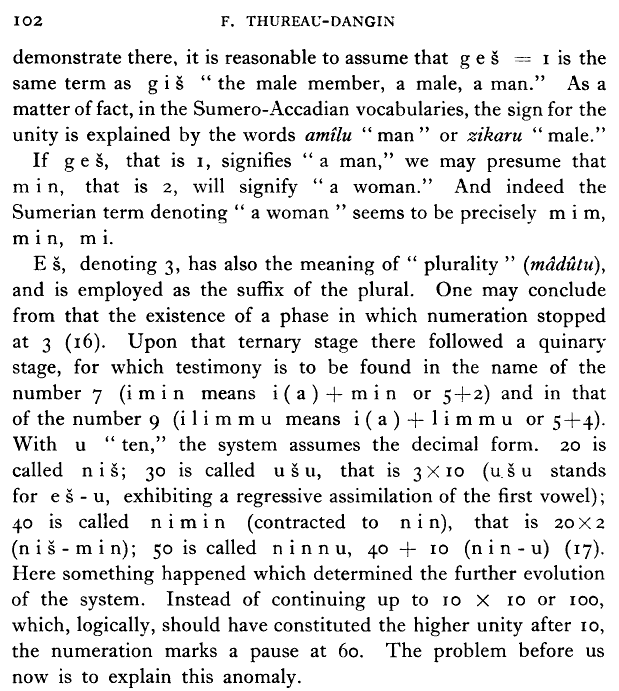