Stop the Tape Too! Finishing off Matt disagreeing with Dom

* News Flash -- Conservatives Oppose Regulations Generally, But Not Those for Dismembering Unborn Children: We've called this conservative, The Awesome Matt Walsh, yet of course when we believe it necessary we criticize him. Today we conclude our, "Stop the tape! Stop the Tape!" review of Walsh duking it out with Bob's son Dominic Enyart over Matt's misguided support for regulating inherently criminal behavior such as regulating child killing and pornography (which includes, of course, the regulation of prostitution and the trafficking in human sexuality). Bob on air and Dom by email have no problem responding to Matt's Why I'm Wrong segment. (You may want to first hear Part 1.)

* Focus on the Family Attempts to Improve Abortion Industry Image: The group James Dobson founded is unwittingly helping the child killers and exposing one of the errors in Matt Walsh's support for regulations:

* Arkansas Trucker Just Called in with: An Arkansas over-the-road truck driver (one of the heroes only recently widely recognized) heard Part 1 of this Matt/Dom disagreement when Bob mentioned about abortion regulations, "End it, don't mend it", and Robbie added, "Abolish it, don't polish it!"

* Matt Supported Regulations with a Cigarette Argument: Nealy a half million Americans are still dying every year from smoking-related cancer and through secondhand smoke, many continue to harm children also, ignoring polite-looking text warnings (see below) printed on the sides of cigarette packs. (That death toll is inflated somewhat however as compared to the 14% of adults who currently smoke, for we're still paying the price in suffering and death from previous decades when a higher percentage of us smoked.) 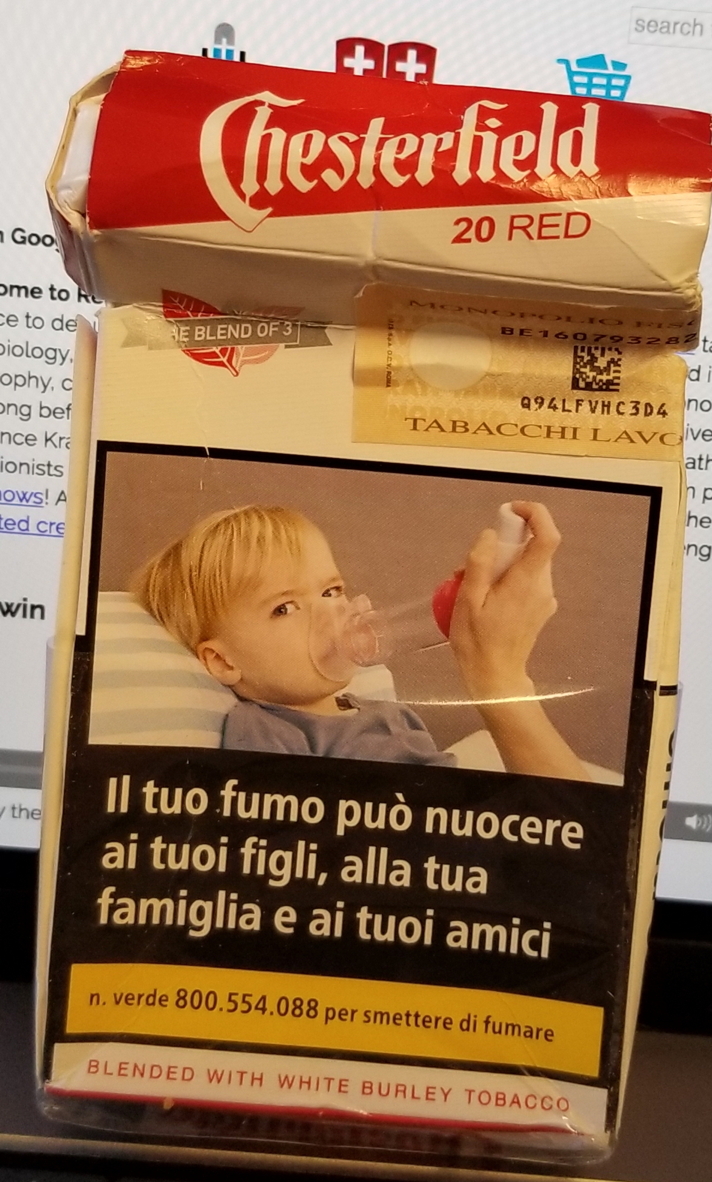 Italy, meanwhile, with their regulations requiring horrifying graphic images (right; and as proposed also in the U.S.) to scare and guilt people into quitting cigarettes has a ten-percent higher incidence of cigarrete smoking.

* Matt Needs to Hear 13 Swedes: For insight into one of the factors, consider the thirteen Swedish reporters who traveled to Denver to cover a U.S. presidential election and while here as a group interviewed Bob as an American Right To Life spokesman. Though allegedly they were professional journalists, they could not keep from making their own pro-abortion argument: "America would not have so much opposition to abortion if the procedure were more humane and regulated as it is in Europe." In Bob's article at AmericanRTL.org/regs see the National Abortion Federation's Francis Kissling makes the exact same argument.

Bob had invited a couple of our nation's leading pro-life activists to attend the event with the Swedes at Denver's historic Brown Palace. That experience helped to galvanize them to oppose the regulation of murder as immoral and as backfiring and working instead to actually preserve abortion. Likewise, in America's public square the outcry against smoking has become more of a whimper while 480,000 die yearly on the sidelines. More is going on in Matt Walsh's one-sided argument about the benefit of regulations than he has so far acknowledged.

End It Don't Mend It: Having yielded the moral foundation of the right to life movement to lawyers, politicians, and fundraisers, National RTL, Focus on the Family, etc., have actually been doing the heavy lifting for the abortion industry, helping to clean up the abortionist's image and unwittingly improving the likelihood of abortion's long-term survival. We urge everyone, Instead, to work toward restoring the vision of victory, a principled moral foundation, and a pragmatic strategy to actually end the systematic slaughter of unborn children in our nation. Please see AmericanRTL.org/regs and AmericanRTL.org/isis!

We also sell our online videos on DVD 1) to provide another way of sharing them and 2) to preserve them in the expected event of Google someday canceling the BEL YouTube channel. (We're NOT paranoid. See our List of When We've Been Dissed.) So please consider purchasing this DVD! Focus on the Strategy II not only documents the political sell-out of the pro-life movement, it answers the question of how to restore the movement and end America's legalized child killing. Focus II stands alone, preferably viewed before Focus I.