Sin in the (Christian Music) Camp

* Pianist & Singer Kelly Clinger: talks about her tragic tour through Disney television and the secular music industry only to turn to the Lord and find out that in the Christian music industry and in mega-church worship groups all the same sin abounds, fornication, alcohol, drugs, homosexuality, and abortion. Kelly finally abruptly walked away from the worship team at an Atlanta mega church when the pastor announced that because the youth leader had impregnated a young woman, he was passing the collection plate to raise money to pay for an abortion.

* From RSR's Good Little Rat, Bad Little Bat: For one of our science programs, Clinger weighed in... 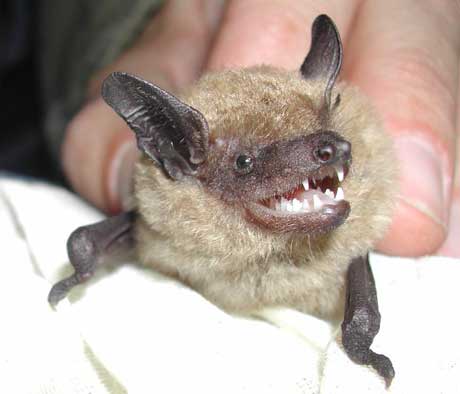 * Discover Magazine Thinks Mutated Finger Is A Big Step Toward Flight: Really! You just can't make this stuff up! Ha!! Real Science Radio co-hosts Bob Enyart and Fred Williams get a kick out of Discover Magazine claiming that a mouse with mutated fingers, "may have instigated the evolution of mammalian flight." Before pointing out why this sounds mickey mouse to us, first consider one of the many problems that evolutionists have, which Discover admits in their article: "The fossil records show a sudden appearance of mammals [i.e., bats, which are] nearly identical to modern bats about 50 million years ago—with no transitional forms." (And with all the variation that exists among modern bats, they could have just dropped the word "nearly" from their description of Darwin's problem.)

* Singer Kelly Clinger To Take Flight: If long fingers could really instigate the evolution of mammalian flight, we'll have to check in with the Clingers to see if Matt and Kelly have been able to keep their kids on the ground. From the Mickey Mouse Club (the real one), to touring with Britney Spears, to standing up for the Lord and the innocent unborn child, personhood advocate Kelly Clinger is a hero to Real Science Radio! As for taking flight? Kelly wrote to RSR: "Just wanted you to know that my long fingers have never caused me to take flight! :)  Thanks for the shout out on Friday!" -Kelly Clinger

* Thank You to Everyone Who Helped: Thank you to the 110 families whose pledges have met our telethon goal of 100 people giving $20 a month! Also, our vitally important goal of $20,000 in one-time gifts brought in $8,000. Thanks SO MUCH to each person who gave. Of course, that shortfall will make it extremely difficult for us to meet our monthly airtime bill of $3,000 throughout this year of 2011. Of course, it's not too late to help, so if you can, please call 1-800-8Enyart to give right now or consider giving online with either a one-time donation, or by getting some of our BEL books, DVDs, CDs/MP3s at our KGOV Store, or by subscribing to a BEL service, all of which will help BEL stay on air!

* Gospel Message: The Gospel of Jesus Christ is presented at AmericanRTL.org/Gospel.

Today’s Resource: Now you can order Focus on the Strategy 3 as well as Focus on the Strategy 1 & 2 DVD combo containing the blockbuster analysis of pro-life and political strategy. Focus on the Strategy, advertised by other ministries as the DVD of the Century, is the blockbuster analysis of Christian political strategy, filmed before a live audience of 300 Christian activists revealing a presentation given to Focus on the Family to Dr. James Dobson's V.P. Tom Minnery and their Public Policy group. And the sequel, film festival finalist Focus on the Strategy II, with its dozens of video and audio clips which has extraordinary endorsements from many Christian leaders as the must see video for everyone who wants to end 'legalized' abortion. And now, Focus 3 presents American RTL's three-pronged strategy of how to end abortion! Please watch these vitally important videos online or order the above DVDs, and consider getting a set for a friend, for a pro-life leader or activist you know, and for your local pro-life organization!

*#MeToo Movement Gives Pass to the Many Abortionists Raping Women

*A View from the Edge of the Cliff

*Quantum biology does what standard chemistry and physics can't

*Infinite wealth in heaven yes, but how about here? It's like this...

*Bill Gates, Shep Smith, and the Hellbound Lot of 'Em