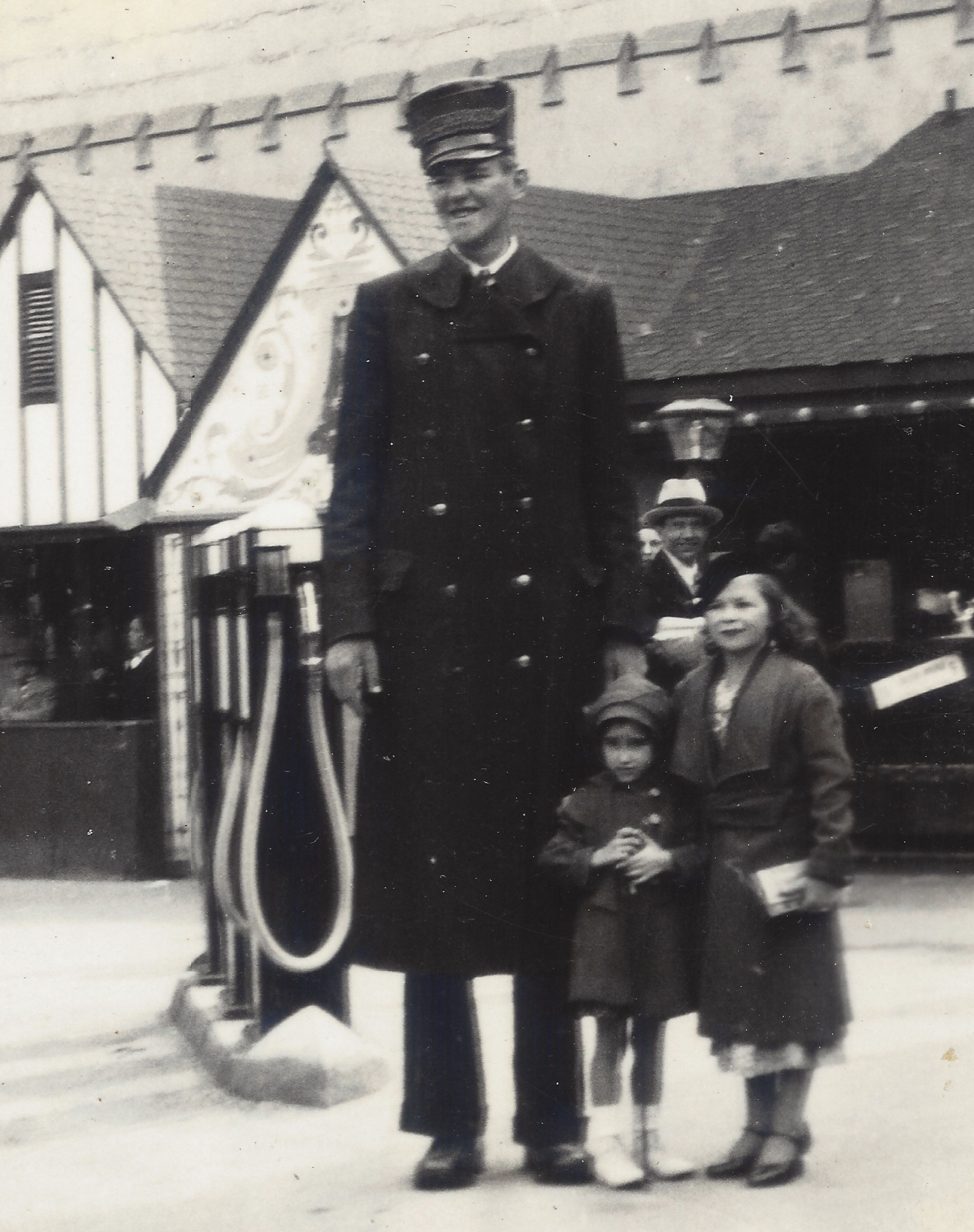 * RSR Answers Ham's, "Is God in Control?" (Photo, right: RSR listener's grandmother in 1934 with Robert Wadlow, Chicago World's Fair.) Bob Enyart and Fred Williams open the Real Science Radio mailbag and reply to 1) a personally addressed question from a listener, Andrew, about the giants in the Bible and any possible evidence for them today; and 2) a newsletter from Answers in Genesis presenting Ken Ham asking, "Is God in Control?" The guys answer, "No", not in the way that Ken implies. AiG and other large creation groups occasionally weigh into territory that by policy they typically avoid when now and then they obliquely promote a particular denominational or otherwise specific theological perspective. So Bob and Fred ask listeners for patience and grace as the guys directly respond to the theological implications brought up, whether intentionally or not, by the beloved founder of AiG.

* RSR on Ancient Giants: As with the claim that a Photoshopped image actually depicts a civil-war era pterosaur photograph, Photoshoppers, intentionally or not, have deceived many who hope to find archaeological evidence of ancient giants, also known as the nephilim, etc. Ironically, well-intentioned Christians who offer erroneous evidence for the Bible end up hurting the cause of the Gospel. The giants described in the Bible are real, and therefore they are physiologically possible. Those who promote as real the Photoshopped images of oversized giants can learn a lesson from the paleontologists. (See also rsr.org/giants-2 and rsr.org/giants-3.)

First, they realized they had overcounted the number of dinosaur species by double (so 500 dino species went poof) and then the paleontologists realized that the ones that remained lost weight, big time! For example, instead of Brachiosaurus weighing 80 tons, it is now carefully calculated to have weighed about 23 tons. (Not only did this make allomotrists happier, but reducing the numbers and weight of dinosaur kinds also reduces the demand on Noah's family and ark, even though of course they brought juvenile creatures onto the ark!)

As to overweight dinosaurs and oversized giants, God's design of actual creatures is not only brilliant but omnicompetent. It's not, however, science fiction. It's not cartoonish. There's also strong evidence for quantum biology, that God designed organisms to utilize the currently incomprehensible features of quantum mechanics. What God's designs do not do however, is violate the laws of physics. He designed reptiles, which grew no where near the size the larger dinosaurs, with their legs extending outward from their bodies, before they descend downward to the ground. That design, perfect for reptiles, would greatly limit the size and mass of dinosaurs, since horizontally-inclined legs would quickly fail as the animal's weight exceeded the carrying load. So God designed dinosaur legs to extend directly downward from beneath their bodies. This enables the larger kinds, such as the biblical behemoth, discovered only in 2014 and named dreadnoughtus, to gain weight till it's 65 tons, much heavier than a Boeing 737 airliner.

The giants in man's ancient past described in the Bible were living, breathing, biological organisms. Therefore, they did not defy the laws of physics. Because they stood on two feet they could not be arbitrarily large. For example, cedar trees will grow to 200 feet tall (five telephone poles) and even to 230 feet! So that's quite the wild range for the imagination to run with to propose super-tall giants who could even lift average pyramid stones weighing 5,000 pounds.

Hearing a Bible verse like Amos 2:9 read about "the Amorite... whose height was like the height of the cedars", one notices an abrupt cut off before reaching the end of the verse which makes clear that this is an analogy and not a literal comparison. For God says of the Amorites, "I destroyed... his roots beneath." Tolkein derived his word Ents, for the tall and strong Middle-earth tree beings, from the Anglo-Saxon word for giant. But for all that could be said about mankind's actual ancient giants, Ents notwithstanding, they did not have roots. So we can see that passages such as Amos 2:9 are not giving a literal but a metaphorical description. Other Bible passages that some of those obsessed with giants insist are literal are those that describe the Israelites as "grasshoppers" before the giants of Canaan. "There we saw the giants (the descendants of Anak came from the giants); and we were like grasshoppers in our own sight, and so we were in their sight" (Ex. 13:33). However God uses the same metaphor in Isaiah 40:22 saying of the earth that "its inhabitants are like grasshoppers." A simile is a comparison using like or as and these verses, as overtly obvious except to those with an extreme bias, are figures of speech. Regardless though, modern "giants" who have amazed and sometimes entertained the masses top out at nearly nine feet tall and compared to these tallest modern humans, people have often described the comparison in terms not unlike the biblical figures of speech.

Moses in Scripture provides an actual length measurement which can be used to estimate the height of one especially notable giant. "For only Og king of Bashan remained of the remnant of the giants. Indeed his bedstead was an iron bedstead. (Is it not [still] in Rabbah of the people of Ammon?) Nine cubits is its length and four cubits its width, according to the standard cubit" (Deut. 3:11). So this 13.5-foot bed would make Og, leaving six inches headroom and perhaps two feet at the foot of the bed, a stunning 11 feet tall! Og would make Robert Wadlow of Alton, Illinois, the tallest measured human being, at 8.11 inches, look incredibly short in comparison!

The square-cube law, first described by Galileo, compares an increase in the size of an object with its much faster increase in volume (and typically, in weight and mass). Wadlow, for example, had to walk with a cane and leg braces (which sadly caused the infection that killed him at age 22) because as his height increased, there was far too much weight for his size-proportional growing bones to support. This law gives an exact relationship of size and volume for something as straightforward as a cube. But even for things as complex as biological organisms or machines that increase in size, the law still gives a good first approximation of certain expected physical attributes and a heads up for design requirements for engineers scaling up inventions, and for God when He went from designing mice to elephants, deer to giraffes, and giraffes to Brachiosaurs. Scaling upward in size introduces unavoidable physical consequences, including as you actually or theoretically increase the proposed size of a human, or any object, including any biological organism, and that would include the physical bodies of the giants know as the nephilim.

If you doubled Wadlow's height from nine feet (times 2) to 18 feet, to get his new weight you would multiply his 440 pounds by 8 (2 cubed). At 3,500 pounds his bones would be crushed with every step. So even taking into account that organisms from 6,000 to 3,000 years ago were stronger and fitter than today, and taking into account also the supernatural aspects of the origin of the nephilm, still, they possessed physical bodies. Ancient giants, unlike giraffes and Diplodocus, still walked, as people do, on two feet and two legs. To be much taller than the Bashan's Og, they couldn't have been simply much larger human-looking beings. Physically, to be as enormous as some irresponsibly claim, these giants would have had to be different kinds of beings, not people-looking kinds, for people-looking 20-foot tall giants would be physically impossible, and besides, such creatures are biblically uncalled for. So what about those believers who have invested hundreds of hours or even years studying and believing the Photoshopped giant skeletons are actually real? We urge them to ask God for the courage to study real science, and real evidence for the Scriptures. This shift in their focus could bring them enormous satisfaction and help them to have a greater influence on others, especially on those who so desperately need to hear about our creator and savior Jesus Christ. 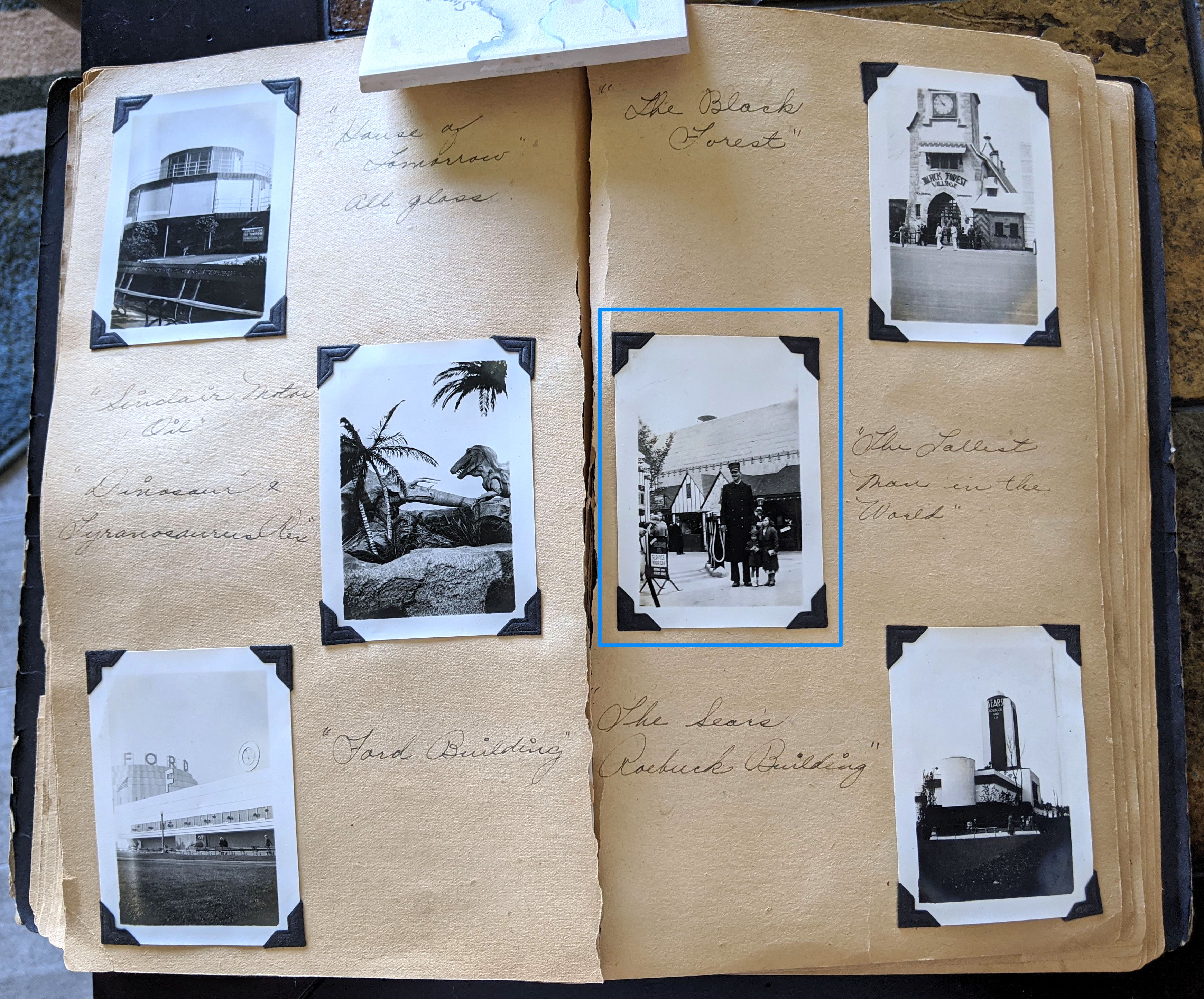