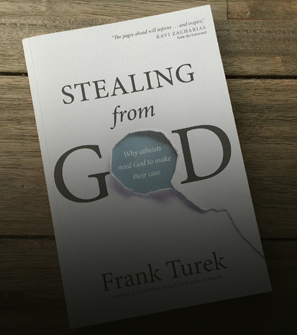 * Bob Enyart and Frank Turek Talk Apologetics: RSR co-host Bob Enyart interviews famed apologist and Christopher Hitchens debate opponent, Frank Turek on his observation: It’s not that the argument for atheism fails but rather, if atheism were true, every argument fails. Bob highly recommends Dr. Turek’s book, Stealing from God (whether in print, digital, or audiobook format). The two discuss the law of causality, immaterial reality including the laws of logic, irrationality including theoretical physicist (emphasis on the theoretical) Lawrence Krauss, and the atheists’ own admitted problem of evil in that mutation and natural selection seem incapable of producing the intensity of human rage expressed by millions of people. [You can also hear Bob's related discussion with an atheist at rsr.org/problem-of-evil.]

* When the Cat's Away... Two #1 Google Rankings! After Frank leaves the program, Bob continues to discuss this powerful apologist and his great book. But Bob also highlights two areas of disagreement with Dr. Turek: timelessness and the Big Bang. Bob Enyart has earned #1 Google rankings for the following search terms...
- is God outside of time
- big bang predictions
If you search for those terms, you'll find that Google has ranked us #1 out of millions of other related pages for kgov.com/time and kgov.com/bbp. This, of course, doesn't mean that we're correct and that Dr. Turek is incorrect. But what a #1 ranking typically indicates is that such a page is the best available presentation of that topic from its perspective. And if that is true in these cases, and if Dr. Turek has not defended his support for timelessness and the big bang in light of our arguments, that means that Dr. Turek has not yet defended his views against the best available counter arguments. For example:


* Frank Turek and the Big Bang: Dr. Turek rightly rejects the materialist explanation for the diversity of life of Earth, i.e., Darwinism, and he also rightly rejects the Christianized version of that theory, theistic evolution. However, unfortunately, Frank accepts the big bang theory (utterly falsified in the above video). And worse, he uses the big bang as evidence for God, via a Christianized version of that materialist explanation for the development of the universe. If you take the time to review our rebuttals to these claims (time & bb) of Dr. Turek, please send along your thoughts to Bob@rsr.org.

* Solving the Full Euthyphro's Dilemma: In their brief comments, the guys agreed on this topic. But you might want to see our Euthyphro article which goes beyond the typical apologist's response and answers not just the argument as thrown at us by atheists. We go further to answer the deeper included question of: How can God Himself know that He is good? (Hint: A unitarian deity like Allah, if he existed, would have a way of determining for certain that he were evil, if he were; but he could not determine for certain whether he were good.) Thinkers like Dr. Jonathan Sarfati and Dr. John Lennox have noticed our article, which you can read at rsr.org/euthyphros-dilemma.

* By the Way, Our Two James White YouTube Videos: are at 5,000 and 30,000 views. This first 2-minute video of excerpts presents The Shocking White/Enyart Debate Aftermath. In the aftermath, and for the reason explained just below, R.C. Sproul Jr. and Dr. James White both startlingly deny that God the Son took upon Himself a human nature.
- Sproul: "God the Son does not now nor has He ever had two natures."
- White: "God the Son does not have two natures. I did not 'admit' that He did/does/will etc."
These men are currently denying this central doctrine of Christianity (hopefully only temporarily, and hopefully, they will simply retract their shocking comments) because they are trying to defend the claim from Plato that God is utterly timeless (thus without sequence) and that He is utterly immutable (incapable of any change whatsoever). Please pray for these men who clearly love the Lord but who are subordinating the biblical Incarnate Son of God to an extreme Platonic utter immutability. See also:
- kgov.com/holland for our interview with Liberty University associate professor of apologetics and theology Dr. Richard Holland on his research demonstrating, including with stunning examples, that for 1500 years, leading Christian theologians arguing for atemporality and utter immutability have NEVER ONCE defended those doctrines in light of the Incarnation. (Thus it is not surprising that James White and R.C. Sproul Jr. would have such a difficult time here, because they are attempting to wade into uncharted theological territory.)
- the full Enyart/White debate just below and at youtu.be/isRksh30ZUI,
- kgov.com/james-white for analysis and the complete aftermath.

To summarize James White's heretical position, while he very readily admits that Jesus has a divine and a human nature, he refuses to acknowledge the same of God the Son, that He has a divine and a human nature. God the Son and Jesus Christ are the same Person. White's refusal to acknowledge that God the Son has a human nature is a form of the Nestorian heresy, which even Sproul's own father has warned Christians about. It is almost as though, to defend the unbiblical teachings of utter immutability and atemporality, these men feel themselves pushed into a direction of broaching the horrifically false idea of Jesus as a fourth person of the Trinity. As made manifestly evident by Scripture, by Liberty University's Dr. Richard Holland in his book, God, Time, and the Incarnation, there are not two persons of Jesus and God the Son, but rather, the one Person of the Son who became Incarnate as Jesus Christ. Another way of spotting this error is to realize that James White is claiming that Jesus the Man became Man, but that God the Son did not become Man. And to paraphrase John Lennox, So it turns out that heresy is heresy.

* Is the Future Settled or Open? See the full debate between James White and Bob Enyart...

* Other RSR Interviews and Informal Debates: If you love Frank Turek (as we do here at Real Science Radio), you may also want to see some of our informal debates including with:
- Stand to Reason's Greg Koukl on Greg's Moral Relativism
- Ann Coulter's Guilty on BEL
- Neal Boortz vs. Enyart on a National Sales Tax
- Pro-Choice Ilana Goldman on BEL
- Etc.