* Interview-based Review of Flood Models: Jane Albright concludes her report to RSR on the 16 interviews she conducted with creation scientists and leaders for her article series exploring the leading flood models, the science, the Scripture, and the controversy. In today's Real Science Radio broadcast, Bob Enyart and Albright, who is a working professional engineer formerly with the U.S. Navy nuclear engineering program, discuss the personal and organizational relationships surrounding the controversy over the three leading flood models, the Vapor Canopy Theory (VCT), the Hydroplate Theory (HPT), and Catastrophic Plate Tectonics (CPT).

* See More About the Controversy:
- Grand Canyon Month at RSR opens relating the Steve Austin/ICR plagiarism mess
- The Steve Austin/Walt Brown "Grand Lake" Plagiarism Mess to see the original documentation
- RSR's List of Answers to HPT Objections today's Albright program is the 9th in the series
- And the comparative HPT/CPT/VCT spreadsheets (below) mentioned on today's program.

An Excerpt: Dr. [John] Baumgardner [long an ICR scientist], wrote me [Albright], "From the nasty interactions that Brown had with ICR in the 1990’s, including threats of lawsuits … I personally have no desire to deal with such nastiness." After reading for myself all the correspondence on the "lawsuit issue" and sharing with Dr. Baumgardner the actual history, he then replied, "I admit my understanding of the interactions between Walt Brown and ICR was all based on second-hand sources on my part." Shockingly, even the president of the Creation Research Society, Dr. Don DeYoung, said to me, "You may even be aware that there have been lawsuits between Walt Brown and ICR. Saying that they have stolen each other’s ideas." I respectfully challenged him on this because I knew that it was not true. He claimed to have documentation proving that is was true, but declined to produce it. I then asked him to speak directly with Brown and me on this subject, but again he refused.

Another example of this comes from Mark Looy at Answers in Genesis. In 2013 a nuclear engineer (who today works at one of our nation's national labs and since 2016 has become a close friend of RSR) asked Mark why AiG doesn't carry Dr. Brown's book. The following is an example of what we know from extrapolation has been said by many creation leaders hundreds of times:

And since I wrote my last email to you, I discovered that Walt had not only threatened to sue an ICR scientist, but ICR's president as well... It appears that you condone such behavior (unless you don't believe the threats were actually made). You don't have to associate yourself with us if you wish, but why defend such a person who would even consider violating I Cor. 6 and Galatians 5?

Wow. Bob Enyart has a long-standing appreciation for Mr. Looy and confirms that he would not knowingly spread this slander. However, Mark did not do his due diligence and accepted misinformation likely from some other trusted Christian leader. If Dr. DeYoung, Mr. Looy, or Dr. Baumgardner offer an apology to Walt Brown, we will post such apologies at rsr.org/hpt-retractions and remove their quotes from here.

* Help Bob Build a List of Scientists and Engineers Supporting HPT: Please email Bob@rsr.org if you are a degreed scientist or a professional engineer (or if you know of one) who supports Dr. Walt Brown's Hydroplate Theory!

What is significant however is that Walt Brown predicted the presence of salt water on Mars, now confirmed! Further, water on Mars does not imply that life could have originated there, for that ubiquitous atheistic claim ignores basic science. Water can sustain life. Yet because water is the universal solvent, it relentlessly dissolves the biological compounds needed to form the most basic biological structures like amino acids and polymers. So, water sustains life, but it is the enemy of a materialistic origin of life. 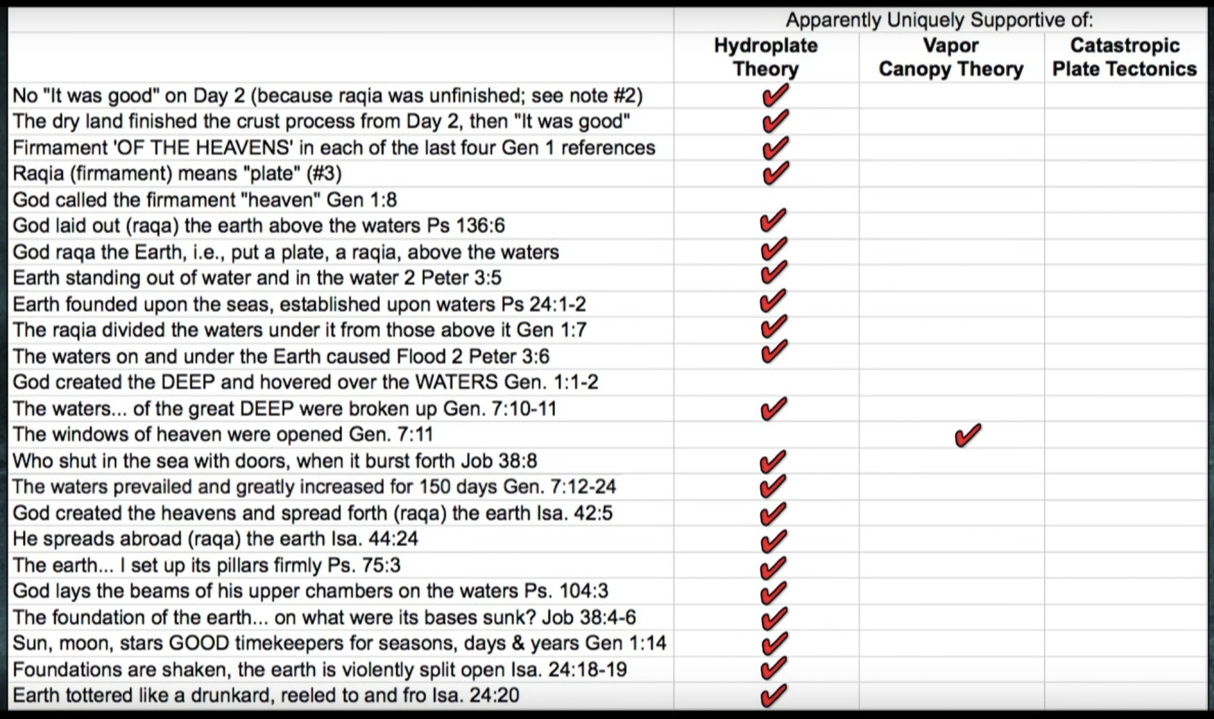 Bob discusses these two charts in RSR's flood video, at 2:06:00 for the Bible Verses chart and 3:06:45 for the Physical Features chart.

* Hydroplate Theory Observations: From Dr. Brown's book, consider these observations and questions:
- that the continents do not fit together well against each other, as presented in the Pangaea hypothesis, unless you shrink Africa by 30%, and make other unjustified manipulations.
- that the jigsaw shape of the continents does fit well against the Mid-Atlantic Ridge.
- what formed the 46,000-mile long Mid-oceanic Ridge?
- that the Atlantic Ocean is relatively shallow, whereas the Pacific is relatively deep.
- what formed the deep Pacific trenches including the 36-thousand foot-deep Marianas Trench.
- that the fountains of the great deep launched the solar system's asteroids and comets.
- that Mars is not the source of Antarctica meteorites, but they were launched from Earth.
- that the debris launched from the Earth beat up the moon, which helps to explain why the near-side has suffered much greater impactors.
- that NASA discovered the Earth-like composition of comets, including that they contain olivine, a very common class of Earth minerals, confirming an inherent prediction of Dr. Walt Brown's flood model.
- that NASA found salt on the asteroid Ceres!

* See RSR's Full Global Flood and Hydroplate Theory Video: New in 2018, we've made available online for free our full, best-selling flood video. (Also available on DVD & Blu-ray for sharing with friends. And to help underwrite making this more widely available, please consider a donation. Thanks so much!) We hope you enjoy this:

Tonight in theaters! But first, Tim Mahoney's here on RSR

Patterns Tomorrow in Theaters: Why We Need You There!

Mutiny in the RSR Studio

Savior, Anti-Christ or... Neither?

The Lesser of Three Evils