* A Significant Broadcast Event: [Part 1 re-aired for New Year's Day!] Today we begin to air what our staff believes is the most important series of author interviews ever produced in the 30-year history of Bob Enyart Live. Richard Holland is assistant professor of apologetics and theology with Liberty University Baptist Theological Seminary [2018 update: Now assistant professor of philosophy at Grand Canyon University]. Dr. Holland authored God, Time, and the Incarnation to explore the impact of God the Son becoming a man on the philosophical doctrines of divine timelessness and utter immutability.

* Enjoying a Coffee Shop Visit: Rather than conducting a typical author interview and squeezing an overview of a book into a single show segment, instead, Bob and Richard have agreed that they will take their time and review the material as though the two men had half a day free to sit next to a fireplace in a coffee shop to consider one of the most far-reaching observations that any human being can make. Consider the insight into ultimate reality provided by the Incarnation of God the Son! We hope you enjoy this 7-interview series as much as we have enjoyed producing it! So, brace yourself. 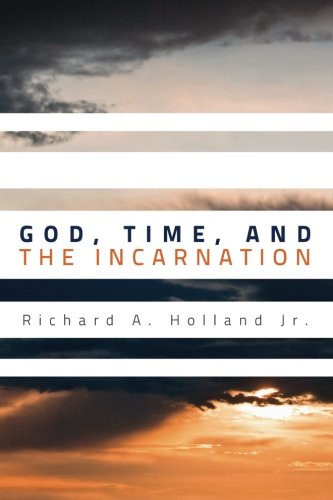 * Isaac Newton, McTaggart, and Cullman: During this series, Bob and Dr. Holland also discuss Isaac Newton, John McTaggart, and Oscar Culllman. Holland describes Newton's concept of absolute and relative time, as Enyart, with three centuries of hindsight circumspectly suggests what Newton may actually have been referring to. John McTaggart contributed the philosophical terminology of time as the "A Series" (the traditional, tensed view of time) as compared to his own (and incorrect) "B Series" of time as static, not unlike the ordered though atemporal positions of numbers on a number line. Holland then describes Oscar Cullman's analysis of the Greek vocabulary showing that, as we've long reported at rsr.org/time, the New Testament terminology regarding God and time does not support the philosophical claim that He exists outside of time, as Bob adds, but rather, quite the opposite.

* Newton on Time Eternally Flowing from God: Post-show update: We teach at kgov.com/time just as Isaac Newton stated, that "the existence of God was eternal, in relation to duration". Consider this quote from the Stanford Encyclopedia of Philosophy to show that Isaac Newton's understanding of time has much in common with BEL's teaching but not with classical theology...

Isaac Newton founded classical mechanics on the view... that time passes uniformly without regard to whether anything happens in the world. [H]e spoke of absolute space and absolute time, so as to distinguish these entities from the various ways by which we measure them... From antiquity into the eighteenth century, contrary views... insisted, there can be no lapse of time without change occurring somewhere. Time is merely a measure of cycles of change within the world. [BE: Time doesn't move faster on a desert planet during a sandstorm nor slower in Vermont during an economic shut down.] ...Newton did not regard space and time as genuine substances (as are, paradigmatically, bodies and minds), but rather as real entities with their own manner of existence as necessitated by God's existence (more specifically, his omnipresence and eternality). [BE: That is, time eternaly flows from God.]

Today's Resource: To order Dr. Holland's book, and receive with it a CD of Bob Enyart's complete interview with Richard, please call 8-080-8Enyart,  that's 800-836-9278. The book with the CD is $33. As always, BEL offers a 30-day money-back guarantee, and for repeat customers, if you don't love the book, we'll double that, for a double-your money guarantee! That's how much we love this book and think that you will be blessed if you read it also!