RSR: Walt on Where the Water Went

* RSR Co-host Bob Enyart Interviews Walt Brown: on where all the water of the global flood went?

* Mountains Parallel the Mid-Atlantic Ridge: As the continents slid away from the rising mid-Atlantic ridge, water continued to burst from the subterranean chamber, and eventually, friction stopped the 50-mph slides, causing the continents to thicken and buckle, and rise up high out of the flood waters. In only hours, most of the world's mountain ranges formed, and they tend to run north to south, generally parallel to the mid-Atlantic ridge.

* Psalm 104:6-9: "... The waters were standing above the mountains... at the sound of Your thunder they hurried away. The mountains rose; the valleys sank down, to the place which You established for them. You set a boundary that they may not pass over, so that they will not return to cover the earth." (NASB)

* The Waters Continued Rising After the Rain Stopped: The rain fell for 40 days, yet the waters continued to rise upon the Earth for almost four more months, not beginning to subside until six months after the flood began. Why? The 40 days and nights of rain resulted from the bursting forth of the fountains of the great deep. Once sufficient water covered the Earth (i.e., after 40 days), it acted as a blanket trapping the subterranean water that continued for months to flow up from the chamber.

* The Ice Age and the Earth Divided: For a couple hundred years after the flood, massive land bridges connected the Americas to Asia, Australia, and Europe. (That aids understanding of the post-flood migration of people and animals, including woolly mammoths.)

With so much ice on the continents during the height of the ice age (a few centuries after the flood), sea level was temporarily about 400 feet lower than it is today. Therefore, land animals and humans could then have easily migrated between all continents. -Dr. Brown, p. 115

Today, if you lower sea level by just a few hundred feet, bridges would re-emerge connecting the continents. The flood's compression event raised up the mountains in a day. As the world's mountain ranges over the next centuries gradually settled back into the mantle, they lifted up the earth's great plateaus (Colorado, Tibetan, etc.). And as the entire continents themselves settled back into the mantle, they raised the sea floor dramatically, flooding the post-flood land bridges. The Hebrew name Peleg means to divide by water (like our Archipelago, a chain of islands). Thus the Bible says, that "the name of one [son] was Peleg, for in his days the Earth was divided" (Gen. 10:25).

* Click Play on the Video to the Right: Our flood video for seven minutes beginning at 1:44:10 describes Genesis 10:25 using sea level animation.

* Ice Age: Secular scientists have difficulty explaining how an ice age could begin, because it requires generally conflicting conditions, because if the Earth was warm, no ice would amass; and if the Earth was cold, insufficient evaporation would occur to produce continental blizzards. But Walt Brown easily explains the ice age, because warm oceans and cold continents are a direct consequence of the Hydroplate Theory. The fountains of the great deep flooded the earth with hotter, subsurface water, and the friction from the Atlantic floor rising, the Pacific sinking, and the continents sliding, all further warmed that water. And the thickening of the continents raised them to great heights, leaving them cold, high enough above sea level to collect snow and ice from the heavy precipitation that came from the evaporation off the warm oceans. The ice melted as the continents slowly settled into the mantle, which raised sea level to submerge the land bridges.

* Submerged Coastal Settlements: As indicated in the above video, ocean levels rose both from ice melting but, perhaps more significantly, from the post-flood continents settling back into the mantle. (Click on the video.) The continental settling, by thousands of feet, was likely the major factor in the melting of the ice so that the settling is the primary cause of the end of the ice age. Update: In 2020 Australian researchers announced the discovery of ancient aboriginal underwater archaeological sites!

* Formation of the Moon: A naturalistic explanation even for our own Moon, let alone the rest of the universe, eludes science. (And the Big Bang theory can't even explain which came first, stars or galaxies.) See also rsr.org/moon.

* The Light of Creation Days 1-3: Before God made the Sun and the stars on Day 4, the original creation of matter itself emitted a wave of light. And the matter that God would stretch on Day 4 into the Milky Way Galaxy had likely emitted the light that lit one side of the spinning Earth. 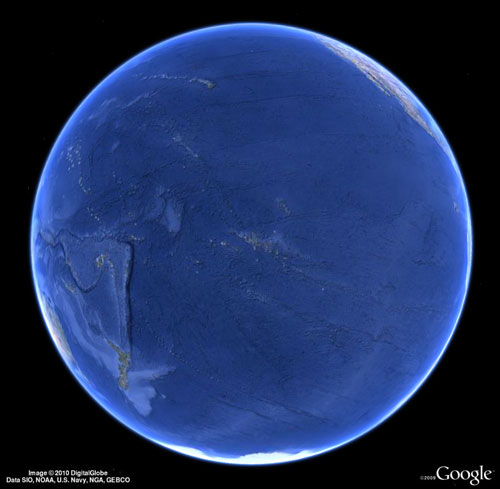 * Is There Enough Water to Flood the Earth? Is  there enough  water  to  cover  all  the pre-flood mountains? Bob Enyart and Dr. Brown discussed the best way to communicate a simple fact, and came up with this sentence: "Most people do not realize that the volume of water on earth is ten times greater than the volume of all land above sea level." All the world's approximately 200 million cubic miles of sediments including sedimentary rocks were initially laid downthrough water. If today the surface of the Earth were smoothed and made perfectly round, "the water depth would be about 9000 feet everywhere" calculates Walt Brown.

* Consider the Planetary Catastrophists' Earth/Mars Flood Irony: (from rsr.org/flooding-on-mars) Secularists claim many planetary catastrophes while denying Earth's single flood catastrophe, even though our continents are covered more than a mile deep in sedimentary strata and the Earth is more than two-thirds covered in ocean water that averages 2.5 miles deep! Meanwhile, Mars is a global desert. Yet NASA, et al., speak of Mars' former Land of Noah (Noachis Terra) and its watery Noachian Epoch; when its fountains of the great deep "burst" forth onto the surface; with its proposed "global-scale", "catastrophic flood" or even "catastrophic floods that"¦ occurred "nearly simultaneously" which "merged into an ocean", "possibly global in extent."

At a 2015 NASA press conference, NASA planetary scientist Geronimo Villanueva said of the entire planet, Mars had enough water to cover the planet to a depth of at least 137 meters, or about 450 feet. Another scientist, Jim Green, claimed that, "Two thirds of Mars' northern hemisphere was a huge ocean that may have been as much as a mile deep." The University of Edinburgh announcing a 2018 discovery spoke of "the Noachian" period of Martian history. So NASA, et al., (willfully ignorant of Earth's rsr.org/evidence for Noah's fountains of the great deep) think that ocean, which disappeared because "Something happened on Mars and it suffered a major climate change and lost its surface water", helps explain why the planet is still moist. Their estimate, as in the journal Science, of "a global equivalent of water layer at least 137 meters deep" is wrong because they are misinterpreting the reason for the concentration of deuterium. (See rsr.org/radioativity and rsr.org/comets.) Yet the point is the irony that for the desert planet Mars the secular world will readily ponder a Noachian catastrophic flood possibly global in extent while pretending Earth's history could not possibly have included a global flood, despite the rsr.org/evidence.

* Other Interesting Observations About Water:

From Dear NASA, thanks for taking our call (at rsr.org/abiogenesis): Water is the Enemy of Abiogenesis: Beware the ubiquitous bait-and-switch. Wherever water is found, NASA claims that would be a good place to search for evidence that life may have originated there. Yes, water is needed to maintain life, But as the universal solvent, outside of the controlled environment of a living organism, water relentlessly dissolves the chemical building blocks of life like amino acids and polymers. Thus NASA, the BBC, ESA, Nova, and entertainers like Bill Nye, ubiquitously use this bait-and-switch by manipulating their audiences, exploiting both their gullibility and water's known role in sustaining life to pretend that it is an unquestioned asset for abiogenesis, to form life from the very inanimate chemicals that it would disassemble. Water helps maintain life but it ruthlessly undoes prebiotic molecules.

the Earth's surface gravity strength prevents the atmosphere from rapidly losing water to space
- the atmosphere's pressure enables our lungs to function and water to evaporate at an optimal rate to support life
- the atmosphere's capacity to hold water vapor provides for stable temperature and rainfall ranges
- the water molecule's astounding robustness results from finely balanced quantum effects. As reported by New Scientist, "Water's life-giving properties exist on a knife-edge. It turns out that life as we know it relies on a fortuitous, but incredibly delicate, balance of quantum forces. ... We are used to the idea that the cosmos' physical constraints are fine-tuned for life. Now it seems water's quantum forces can be added to this 'just right' list."
- water is an unrivaled solvent; its low viscosity permits the tiniest blood vessels; its high specific heat stabilizes biosphere temperatures; its low thermal conductivity as a solid insulates frozen-over lakes and as a liquid its high conductivity lets organisms distribute heat; its an efficient lubricant; is only mildly reactive; has an anomalous (fish-saving) expansion when it freezes; its high vapor tension keeps moisture in the atmosphere; and it tastes great too! 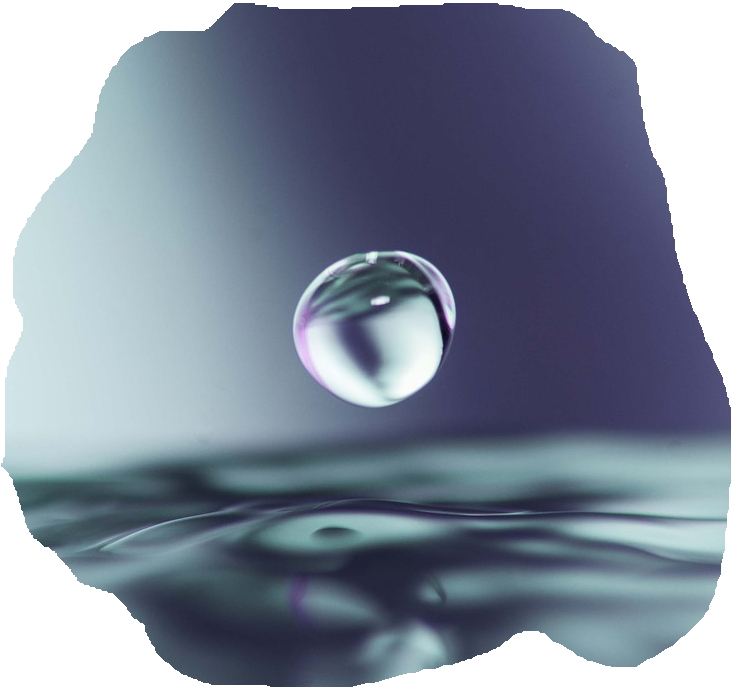 - the phenomenally complex yet harmonious water cycle (one example of astounding functional complexity not explainable by evolutionary theory; another example is the astounding world of quantum physics; also, just btw, "the water cycle on Earth is complex", Science, 2015)
- water permits the passage of the Sun's life-giving radiation to depths of 500 meters
- by the way, one raindrop consists of 1,670,000,000,000,000,000,000 water molecules, that is, one sextillion, six hundred seventy quintillion molecules, or five sextillion atoms
- See muh more at rsr.org/fine-tuning.