Walter ReMine on the Origin of Sexual Reproduction

* RSR Interviews Walter ReMine Pt. 3: The origin of sexual reproduction is inexplicable to Darwinists. Real Science Radio's Bob Enyart and Fred Williams interview electrical engineer and information expert Walter ReMine to show the failures in evolution theory. ReMine's classic book, The Biotic Message, includes a discussion of the "crisis" admitted by leading Darwinists who lament that after 150 years of trying, evolutionists have been unable to even theoretically explain the origin of sexual reproduction.

* ReMine Quotes Kitcher: "One problem is the existence of sex. ... Despite some ingenious suggestions by orthodox Darwinians there is no convincing Darwinian history for the emergence of sexual reproduction."

* ReMine Quotes Smith: "The origin of the sexual process remains one of the most difficult problems in biology."

* ReMine Quotes Michod and Levin: "A survey of evolution biologists would doubtless come up with a consensus that... the origin and maintenance of sex is a 'big' (maybe the 'biggest') unsolved problem in evolutionary biology. ...there is no consensus about where its solution lies. ...no clear solution emerges."

* Bill Nye the Funny Science Guy: In his debate with creationist Ken Ham, Bill Nye committed a ReMineism by claiming sexual reproduction as great evidence for evolution (see rsr.org/nye), presenting an observation that undermines Darwinism as though it affirmed it.

* See Also: At realscienceradio.com/John-Buchanan, from his 1905 letter to the editor Buchanan wrote, "It is impossible to prove that natural selection originated the sexes in the course of linear development," and that rather than a scientist, "Mr. Darwin was... a poet, a seer of visions, and a dreamer of dreams."

* Neutral Evolution vs. Adaptive Evolution: Because adaptive evolution must be spurred on by beneficial mutations, the cost of substitution is extremely high and imposes a severe speed limit on the growth of a new trait among a population. This problem was named after one of the world's most famous evolutionists who first identified it: Haldane's Dilemma. To get around this problem, it is claimed that most evolution is not adaptive, but merely neutral. Here's Bob Enyart's attempt to explain why neutral evolution could occur more quickly than adaptive evolution:

"To get ten mutations that are neutral on one chromosome would require about ten or more mutations. But because of the miniscule percentage of mutations that are beneficial, to get ten beneficial mutations on one chromosome might require 10,000 or 10 million mutations. Yet as admitted by all sides, that much random change would destroy the organism. So, only neutral mutations can propagate quickly, because theoretically they could all occur on one small stretch of DNA and could therefore all be inherited together. The problem for Darwinism, however, is that neutral mutations would waver between being beneficial and being harmful, and thus they ultimately increase the cost of substitution. Therefore, they do not get around Haldane's Dilemma."

* And How About Asexual Reproduction? Consider the common bacteria that's in your intestines right now, Escherichia coli. It typically reproduces asexually without a transfer of genetic material from one organism to another, by making a copy of itself. How efficient is that process? The Journal of Chemical Physics reports on a mathematically modeled replication of E. coli and found that the process is "nearly as efficient as possible", according to the (otherwise irrational) physicist Jeremy England, assocaiate professor at MIT:

Given what the bacterium is made of, and given how rapidly it grows, what would be the minimum amount of heat that it would have to exhaust into its surroundings [to reproduce]? When you compare that with the amount of heat it's actually exhausting, they're roughly on the same scale. It's relatively close to the maximum efficiency. 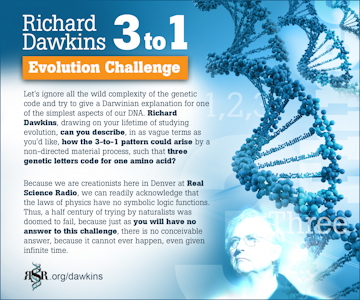 Yet England assumes that such astounding efficiency originates through the unintentional effects of the laws of physics. We assert, however, that neither he nor any secularist can offer any explanation whatsoever (because it is unanswerable) for the simplest aspect of life's genetic code (let alone for how life itself could appear naturally). For example, click to enlarge our Dawkins 3 to 1 Evolution Challenge. (Bob and an RSR producer Will Duffy, while in Oxford in 2015, visited New College and left a printed copy of this challenge in Richard Dawkin's faculty in box.)

* RSR's Dinosaur Soft Tissue Page Kept Up To Date: Our DinosaurSoftTissue.com single page is the web's most complete catalog of peer-reviewed journal papers confirming the existence of original biological tissue from dinosaurs! Since last week, there's now more in the Carbon 14 section of the page to explain why the presence of 14C, which decays in only thousands of years and not millions, is powerful and as-yet unanswered evidence for the "Jurassic Era" being only thousands of years ago!