No Divorce, said Jesus, Except for Immorality 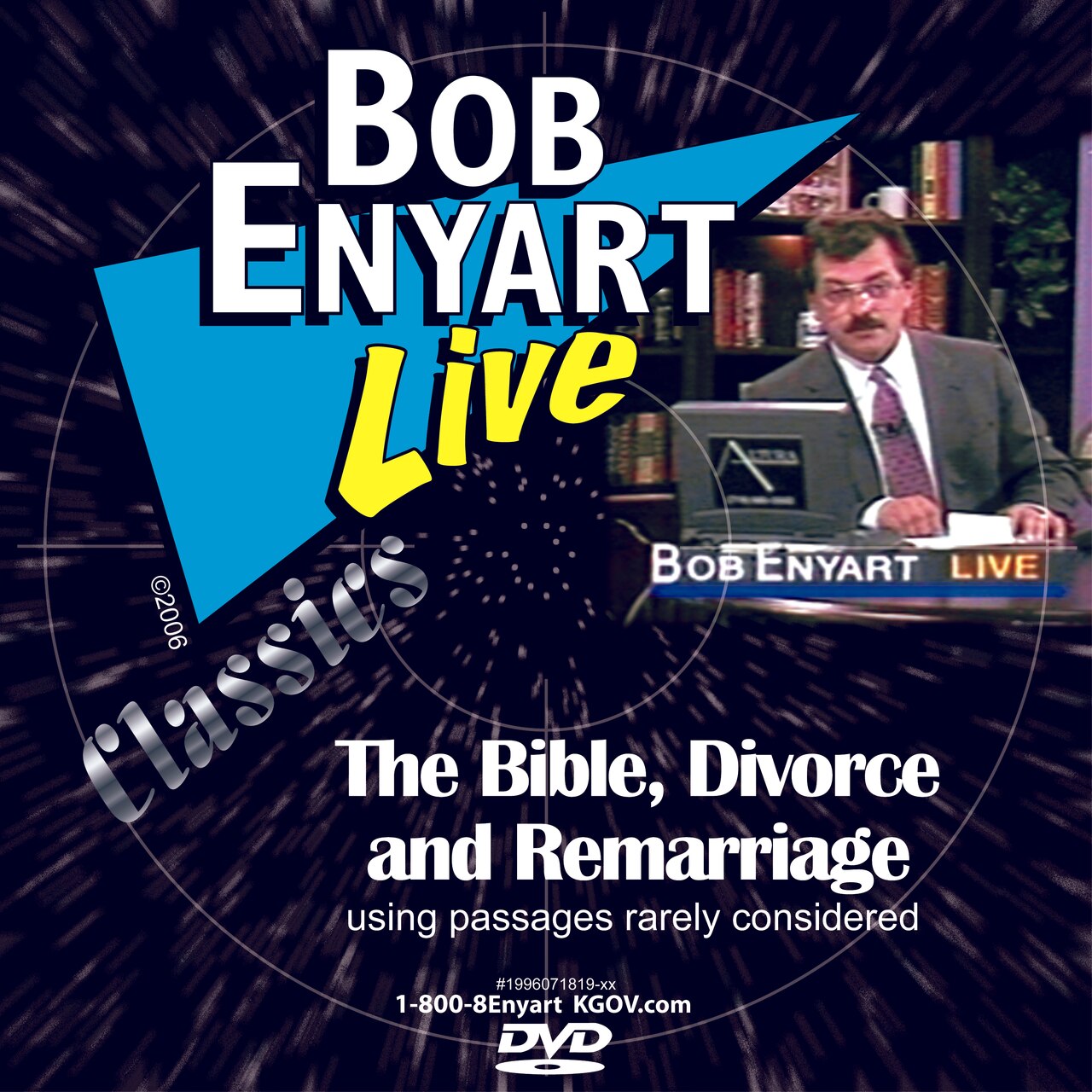 * A Divorced Man Tells Bob: On our DVD or video download, The Bible, Divorce & Remarriage, a divorced man tells Bob that he wants to remarry but that his pastor refuses to perform the ceremony, claiming God forbids it. Is the pastor correct? In this video, Bob reads super secret Bible passages on divorce and remarriage which very few Christians realize exist. Is that really in my Bible? Check it out!

* A Pastor's Kid from Ohio: An adult son of an associate pastor from Ohio thanked us here at KGOV for making available our DVD, The Bible, Divorce & Remarriage, saying that he loves the scriptural teaching in this video and was amazed at the rarely considered Bible verses it presents!

* Bible Verses on Divorce & Remarriage: There exist what are called "just grounds" for divorce. God Himself acknowledges this in the Old and New Testaments, including for His own divorce from Israel (whom He intends to remarry).

"Then I saw that for all the causes [grounds] for which backsliding Israel had committed adultery, I had put her away and given her a certificate of divorce…" Jer. 3:8

But I say to you that whoever divorces his wife for any reason except sexual immorality [porneia] causes her to commit adultery; and whoever marries a women who is divorced commits adultery. Mat. 5:32

And I say to you, whoever divorces his wife, except for sexual immorality [porneia], and marries another, commits adultery; and whoever marries her who is divorced commits adultery. Mat. 19:9

Causing Someone to Sin? Before getting to the primary teaching in these passages, let's address a common question. In the context of sinning, "cause" is a Hebrew idiom (which Jews, of course, could use even when speaking in Greek or Aramaic) meaning, "provide the opportunity to". When Jesus said that if a man divorces his wife without justification, that man "causes her to commit adultery"m this is the Hebrew idiom meaning that he provides the opportunity for her to sin. How does he do this? By unjustly leaving her to fend for herself in a godless world. Men, and even God, provide opportunity to others to sin (like God did by creating beings with a will and, for example, by putting the Tree of the Knowledge of Good and Evil in the midst of the Garden of Eden). And men even entice others to sin. But John Calvin's Chapter 18 notwithstanding, no one can cause another to sin.

Porneia: The Greek word porneia is more expansive than the word for adultery and English versions often translate it as fornication. This word refers to sexual sin generally and therefore includes adultery, fornication, homosexuality, prostitution, transgenderism, addiction to pornography, etc. The Bible uses this term to refer to sexual aberrations such as homosexuality and incest (Rom. 1:29; 1 Cor. 5:1). Sexual intimacy is an inherent part of marriage covenant. Therefore long-term abandonment itself (imposed by behavior along a spectrum running from justified incarceration, to spousal abuse, to long-term denial of intimacy) breaks the marriage covenant (see below 1 Cor. 7:15 and then Ex. 21:10-11).

Devising extra-biblical rules: Absolute prohibitions on divorce and remarriage, along with other extra-biblical rules, come with grave consequences as the Apostle Paul warns (Col. 2:20-23). Some even say that God does not recognize divorce. However, He Himself was not ashamed in the Old Testament to freely state the opposite.  For example, only the priest and his family were allowed to eat the holy offerings ("showbread," Lev. 22:10). So, "If the priest’s daughter is married to an outsider, she may not eat of the holy offerings," (Lev. 22:12). But what if she gets a divorce? If you ask Christians who teach that divorce is never permitted, without exception (in Bob's experience) they will answer this wrongly, claiming that even after divorce, she would not be able to eat again the showbread. Why? Because they claim, wrongly, that God doesn't recognize divorce. However, God answers:

"But if the priest's daughter is a widow or divorced…she may eat her father's food; but no outsider shall eat it." Lev. 22:13

Jesus Himself recognized divorce, as with the woman at the well who was at that time living with (i.e., cohabitating) a man she had not married. Jesus did not recognize her sixth man as one of her husbands. Nor did He recognize any of the previous five, whom likely each divorced her, even the fifth, as still her husband.

"You have well said, 'I have no husband,' for you have had five husbands, and the one whom you now have is not your husband; in that you spoke truly." John 4:17-18

Through the faithful priest Ezra God even commanded the Jews to divorce! Many of them had married pagan wives (Ezra 9-10). So in that case the priests of Israel performed those divorcees "according to the law." That of course shows that God recognizes divorce.

"Now therefore, let us make a covenant with our God to put away all these wives... and let it be done according to the law." Ezra 10:3

I, not the Lord: The first phrase of the following passage, which confuses some, can only be properly understood by applying by Paul's instruction to "rightly divide the Word of Truth." In Bob Enyart's life's work, The Plot (at kgov.com/plot) this "rightly dividing" is presented and within that teaching this passage is addressed.

Now to the married I command, yet not I but the Lord: A wife is not to depart from her husband. But even if she does depart, let her remain unmarried or be reconciled to her husband. And a husband is not to divorce his wife.  But to the rest I, not the Lord, say:  If any brother has a wife who does not believe, and she is willing to live with him, let him not divorce her. And a woman who has a husband who does not believe, if he is willing to live with her, let her not divorce him… But if the unbeliever departs [i.e., divorces], let him depart; a brother or a sister is not under bondage [i.e., can remarry] in such cases.  But God has called us to peace.  1 Cor. 7:10-13, 15

In the Old Testamewnt, even a female slave taken as a wife ("betrothed") can initiate divorce for denial of conjugal rights and for general abandonment. God would not grant greater "rights" to a concubine as to a wife, nor to a slave as compared to a free woman. So her husband...

"...shall not diminish her food, her clothing, and her marriage rights. And if he does not do these three for her, then she shall go out free..." Exodus 21:10-11

Legalists commonly quote other passages, misunderstanding them and wrenching them out of context, to teach the opposite of the above passages. For more you can see on DVD or video download, Bob's program, The Bible, Divorce & Remarriage. Also, see below for Bob's material rebutting a poorly-argued but popular book against divorce and remarriage by Carl Laney.

* Related: The Biblical Role of Government in Marriage Who has the authority to grant permission for people to marry? Some claim that only the church has authority to preside over weddings. Yet in modern times most people willingly submit to the government as the official certifier of marriage. Others believe that the authority to marry lies solely with the two individuals involved. (Our article The Bible and Polygamy presents the prohibition of polygamy in New Testament times.) Consider arguments for and against each of these three ideas on authority regarding marriage. more...

* J. Carl Laney's The Divorce Myth: There's a mention of Laney, correcting him, in Bob's book, The Plot. We've bolded the material below needed to understand the rebuttal to Laney's teaching on marriage, in which he falsely claims that divorce is virtually always wrong. (Absurdly, even though incest was a capital crime, Laney bizarrely teaches that only incest provides grounds for divorce. Wow. Weird. And embarrasingly, Charles Ryrie endorsed his book. My guess is that they were friends, and Ryrie didn't even read the manuscript.) This excerpt is from The Plot's chapter five, titled The Third Tier.

The priests had to obey a set of regulations which were not moral requirements, but symbolic. Some believers think these laws depict "a higher standard of holiness for the priests than for the rest of the people of Israel." [Laney, The Divorce Myth, 1981, p. 92] These rules for the priesthood were only symbolic, however, because all moral laws apply to all men. For God wants "all" men to "be holy, for I the LORD your God am holy"(Lev. 19:2).

God does not have two standards of righteousness, one for the clergy and another for the laity. A portion of the third tier of the law, however, the symbolic tier, applied only to the priests. Because the priesthood symbolized Christ's ministry (Heb. 4:14-15; 3:1; 5:5; 6:20; 7:26; 9:11; 10:21), God forbade many otherwise innocent behaviors to the priest...

Leviticus 21 reveals symbolic truth and not moral conduct. A priest could not:
Touch the dead
Shave his head
Trim his beard
Cut his skin
Marry a harlot
Marry a defiled woman
Marry a divorcée

A priest will profane the sanctuary if he is:
Blind
Lame
Hunchbacked
A dwarf
A eunuch

Also, a priest will profane the sanctuary if he has:
A marred face
Uneven limbs
A broken foot
A broken hand
A defective eye
Eczema
A scab

Some teachers stretch a selected few of these rules out of symbolic proportion turning them into moral propositions. A man who trims his beard does not commit immorality, as the clean conscience of a clean cut Christian minister can attest. And who today would restrict a man with a broken foot from the ministry?

Letting a beard grow is not more righteous than trimming it. Jesus Himself made it clear that priestly regulations were not based on morality. He spoke of the priests innocently profaning the Sabbath as they went about their duties:

"Or have you not read in the law that on the Sabbath the priests in the temple profane the Sabbath, and are blameless?" Mat. 12:5

The regulations against profaning the priesthood are not moral but symbolic. For God would not hold a priest blameless if he committed immorality. However, where performance of one symbol clashes with the exercise of another, as when Temple duties forced a priest to work on the Sabbath, then he rightly transgressed the lesser symbol. A Jew would even break the Sabbath in order to circumcise his son on the eighth day (John 7:23). In the world of competing symbols, circumcision was trump.

The careful student easily identifies the symbolism in many of these priestly regulations:

Hence the priestly regulations fit well among all the symbolic commands in the third tier of the law.

In the 1980s, Bob wrote a book exposing the errors in Carl Laney's argument against divorce and remarriage. Bob's book has never been self-published, let alone published. If you really, really, really want that made available and you're in the position to make a large donation toward that goal, please call the studio at 1-800-8Enyart and we'll see if we can work it out to make that available. Thanks!

* Today's Resource: Did you know that BEL offers a 30-day money-back guarantee on all our materials? To get our insightful divorce and remarriage DVD, please just click on the link above, or call us at 1-800-8Enyart (836-9278).