* Hawking: Bob sets the record straight: last week's spoof of an interview with Stephen Hawking was a joke! We didn't actually have Hawking on the show, but synthesized his voice with software on Bob's notebook PC. Since Hawking believes the entire human race is insignificant, if we did have him on the program, Bob would love to ignore him as though he were actually insignificant, to demonstrate by Hawking's likely response that this atheist doesn't even believe his own claim. Hawking: "We are such insignificant creatures on a minor planet of a very average star in the outer suburbs of one of a hundred thousand million galaxies." 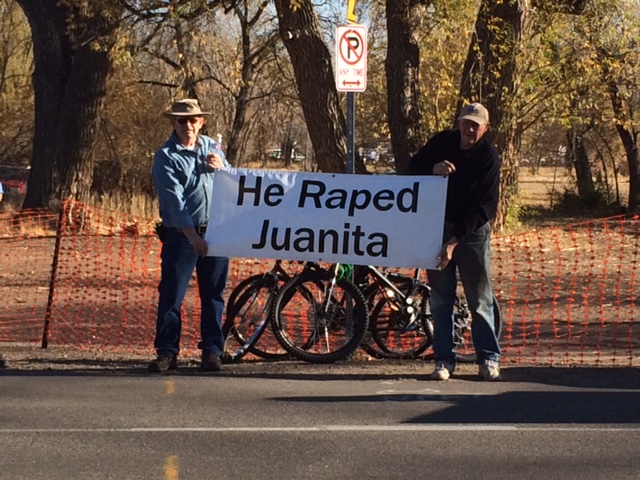 * Searching for Auckland: BEL is looking for a program that details our trip to Auckland, New Zealand to protest Bill Clinton for raping Juanita Broaddrick. If you have a link to that program (one out of 7,000 shows), please send it along to Bob@kgov.com. Thanks!

* Clinton Rapist: Bob describes Friday night's protest in Denver as one of the five best Clinton Rapist protests of a few hundred held in 150 different cities, right up there with the protests in Auckland New Zealand, Little Rock Arkansas, and Aspen, Colorado! The next day, Clinton decried "divisive" politics! (Photo at right across the street from Bill Clinton's campaign appearance in Colorado for his estranged wife on Nov. 4, 2016.)

* Disney's Cars: We’re not bringing our kids to see the Disney/Pixar children’s movie Cars because ScreenIt.com’s review includes the following: 2 hells and 1 use of "Oh Lord;" "I'd give my left two lug nuts for something like that," "You idiot," "You got more talent in one lug nut than..." "You fool," "Snot-rod," "For dang sake," "You moron," "(Holy) Shoot," "Nice Butte" (on a bumper sticker), "Punk," "Where the heck is he?" "What an idiot," "Hot snot;" Mater jokes that Sally "just likes me for my body;" seeing Sally drive away, Lightning comments on (and the camera focuses on) her "rear end;" after Lightning says he'll be staying at Sally's motel (called the Cozy Cone), Mater jokingly teases him by saying, "Getting cozy at the cone, is we?" When Lightning is told that his road repair job looks awful, he callously replies that it matches the rest of the town; some tractors backfire (like passing gas).

Eve from Colorado supports killing the child of a rapist, and worries about alien abductions. 'Nuf said. [Perhaps she was abducted by a man in a flying suit?]

David from Boone asks why Bob, unlike so many Christian leaders, is so right on regarding the social issues. Bob answers that because Calvinism teaches that God is on both sides of the battle between good and evil, planning both sides, funding and orchestrating both sides, that fundamentally handicaps Christianity because we have lost the moral high ground of representing a morally unassailable, unequivocal God. Thus, Christianity's positions become increasingly immoral.