* Limestone Explained by Global Catastrophe: On today's episode of Real Science Radio Bob Enyart and Walt Brown discuss the difference between organic and inorganic limestone. Confirming that many massive deposits are not made up of organic limestone rebuts the typical shallow sea formation theory.

* Organic Limestone: forms from the remains of coral, oysters, crabs, etc., and from certain algae in both shallow and deep seas like like at Normandy, France and the White Cliffs of Dover in England. Enormous inorganic limestone deposits exist around the world including at the Grand Canyon and help to discredit claimed old ages.

* Why Most Limestone Deposits Are Not Organic: 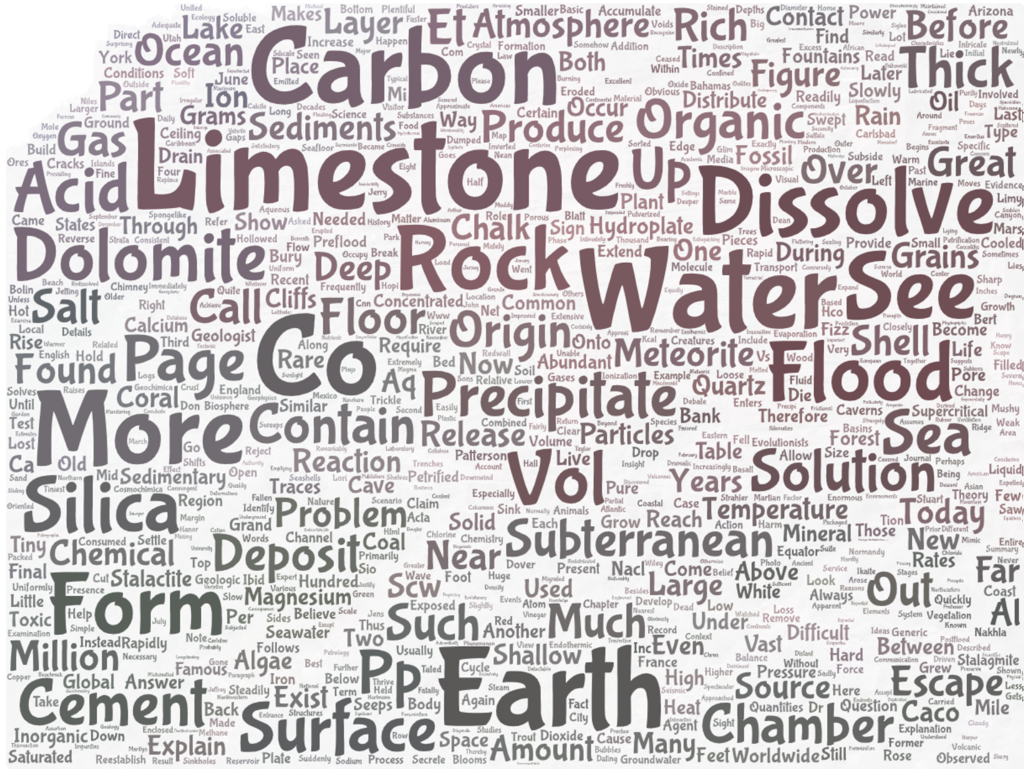 - living processes organize crystals uniformly
- force needed to break shells increases exponentially
- visually see that most grains are not from sea life
- would have poisoned the biosphere by releasing 60,000,000,000,000,000,000,000 grams of carbon
- massive limestone deposits don't only exist where corals, etc., mostly live, within 30 degrees of the equator
- about 21 million cubic miles of limestone exist (based on 10% and 208M cubic mile estimates)
- couldn't rapidly bury of millions of nautiloids in the Grand Canyon's Redwall Limestone
- countless polystrate fossils of many kinds of organisms exist in limestone.

* Redwall Limestone Parallel Strata: Naturally gray but stained red by erosion from overlying clays, the Redwall is characteristic of the strata below an area greater in extent than ten-thousand square miles. At rsr.org/ps note the overwhelming prevalence of "flat gap" parallel boundaries between the layers in and far beyond the Grand Canyon (and around the world as seen in the supplementary images at the bottom of RSR's Parallel Strata page). Such "paraconformities", as they are called, generally lack evidence of erosion. And to the extent that the boundaries are parallel, they not only lack evidence of erosion, but they also lack uneven deposition of sediments, even over thousands of square miles! In this way, these flat gaps call into question the claim that these sediments were deposited over tens of millions of years. 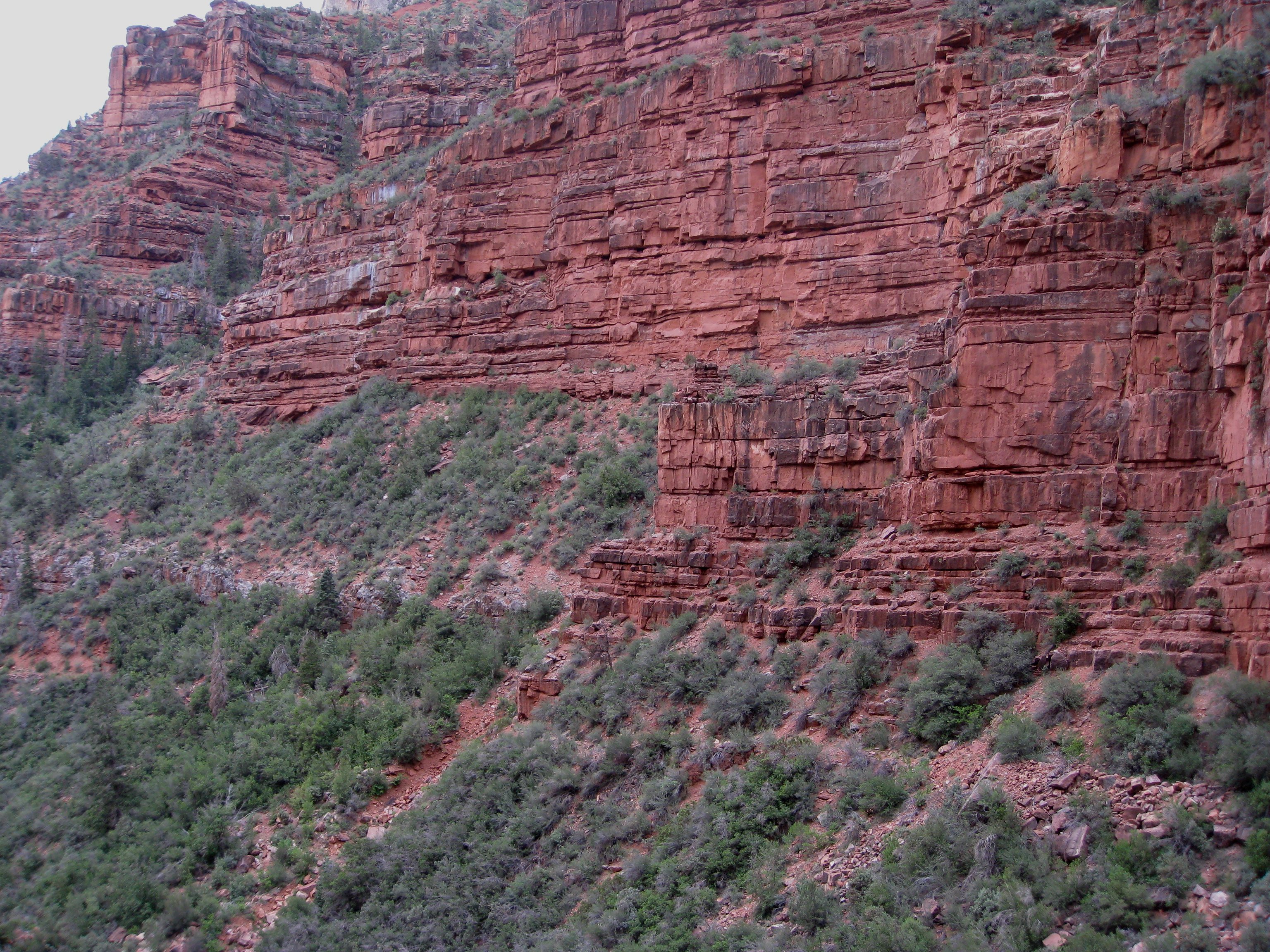 * The Limestone Sphinx Made After the Flood: Of course. For those who have claimed that the Sphinx, made of limestone, was carved prior to the global flood, please realize that the vast majority of the world's 200 million cubic miles of sedimentary rock were laid down during Noah's flood, as was about 100% of all limestone (see above). So even if the Sphinx structure would have been strong enough to survive the flood's intensity (it was not), it could not pre-date the flood of Noah's day.

* The Limestone Pyramids Made After the Flood: Of course. From John Romer's Cambridge University Press text, The Great Pyramid, page 310:

...month after month thousands of 2 1/2 ton blocks of limestone would be hauled up onto the rising Pyramid...

So for those who have claimed that the pyramids, made of limestone, including the outer casing stone, were built prior to the global flood, please realize that the vast majority of the world's 200 million cubic miles of sedimentary rock were laid down during Noah's flood, as was about 100% of all limestone (see above). Further, pyramid limestone has plentiful seashell fossils and Giza itself stands upon thick sandstone and limestone sedimentary layers. So even if the pyramids would have been strong enough to survive the flood's intensity (they were not), they could not pre-date the flood of Noah's day.

* Post-show note on Japan Earthquake & Tsunami: See the BEL Earthquake Warning Policy at our Real Science Radio program on earthquakes, which arose from Bob's debate with a leading geophysicist. Confidence in geological risk assessment is underserved unless the geologist  can account for major features of the earth's crustal history including by explaining: - Why are there 40,000 volcanoes in the Pacific rather than in the Atlantic? - Why are so many ocean trenches in the Pacific and not in the Atlantic? - Why does the center of the Pacific trenches lie opposite of the Mid-Atlantic ridge? more...* To Help the Japan Quake Victims: BEL recommends considering a gift through Samaritan's Purse.

Today’s Resource: Get a science DVD, book, or written, audio or video debate from us and this will help BEL continue to reach people with our Real Science Radio broadcasts! So please check out our Science Department at store.kgov.com. Or to order call BEL at 1-800-8Enyart.

For our RSR Friends: in case you miss other BEL programs, here are some of the atheists Bob Enyart has debated:
- ABC's Wife Swap Guy Reginald Finley, called The Infidel Guy; 3-26-07;
- TheologyOnLine's psychologist Zakath in a 10-round moderated written online debate, also available in soft cover;
- John Henderson who wrote the book God.com 6-15-2006;
- Carlos Morales, Fox News, Huffington Post, etc. reports on U of Texas atheists Bible-turn in program, president of Atheist Agenda 7-14-10
- Freedom from Religion Foundation founder Dan Barker (put the atheist sign near the Nativity at the capitol in Seattle) who was involved with the ministry of Kathryn Kuhlman, one of a group of so-called faith healers. (See a BEL listener who initially compared Bob to Benny Hinn until...) The BEL show was on 12-11-08;
- Leading anti-creationist Eugenie Scott of the Nat'l Center for Science Education, exhumed 5-6-05;
- I Sold My Soul on eBay author Hemant Mehta talks with Bob about gullibility 12-14-10
- Michael Shermer, an editor with Scientific American and the Skeptic Society who in this famous 73-second excerpt on BEL denied that the sun is a light, illustrating that it's tough debating atheists when they're hesitant to admit to even the most obvious common ground. 8-28-03

* From Bob Enyart's Answer to an Online Question: at Quora...

The question is asked more correctly at How much sedimentary rock covers earth? How is this known? so see there for an updated answer.