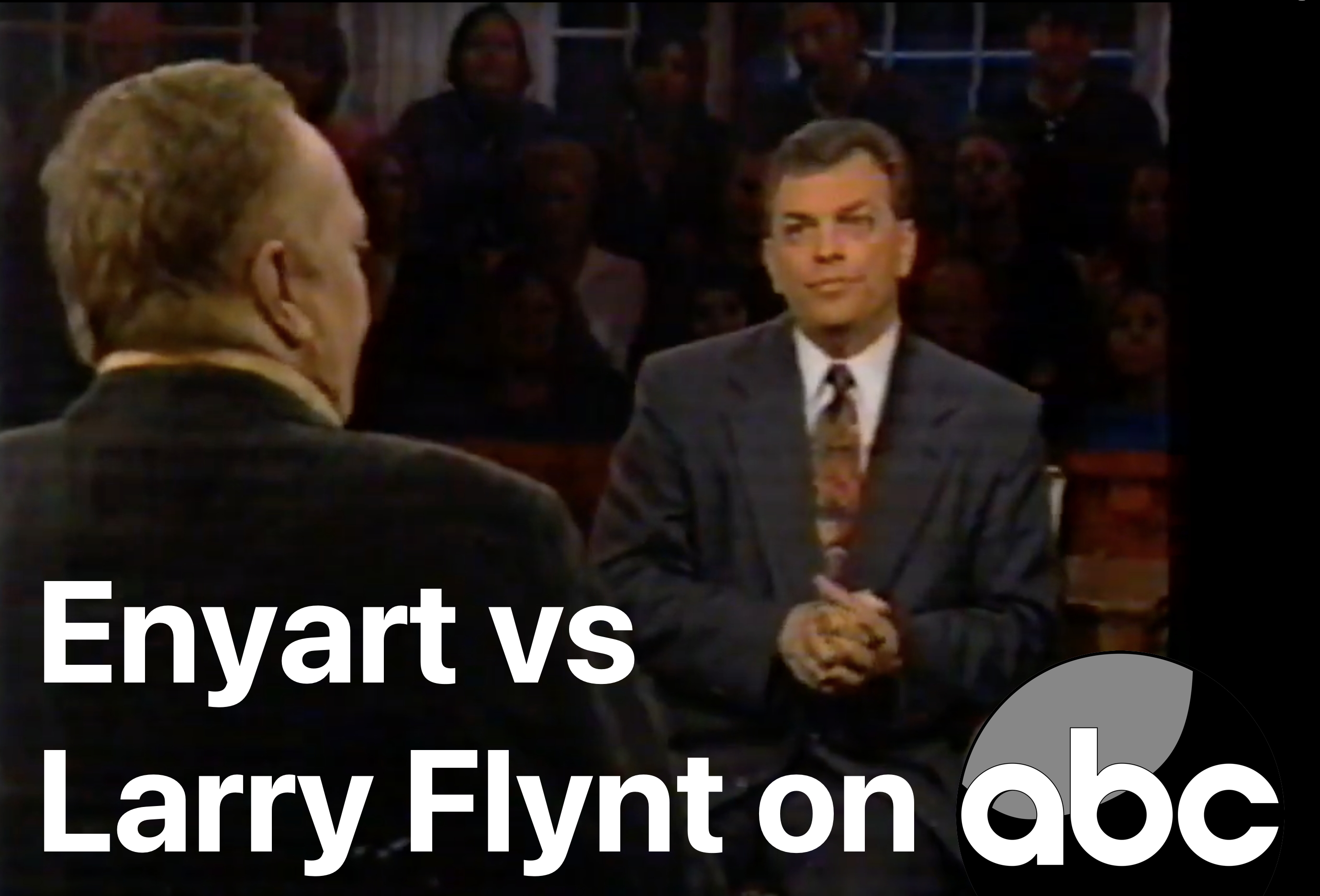 Bob Enyart interviews Gualberto Garcia Jones, vice president of LifeSiteNews, the day after Google canceled their two-million-views-per-week YouTube channel! And Bob quotes NBC's Law & Order from a pastor-approveed episode that argued, shockingly, that rape doesn't justify abortion, especially because the assistant district attorney in the series actually quoted Guabe as part of their script! (See below.) Then, at 28:20 into today's program on our telethon bogus segment, Bob airs the audio from 22 years ago when he confronted infamous pornographer Larry Flynt on ABC's Politically Incorrect with Bill Maher. Please don't listen to that last segment with kids in the room. Even though we edited out Maher, Flynt, and Lynn Redgrave's most vile 90-second flaunt of perversion, the Flynt segment is scarcely appropriate for adults but certainly not for children. Finally, we're now over $9,000 toward our telethon goal of $50,000! We can really use your help. If you can, please check out kgov.com/store or call us at 1-800-8Enyart (836-9278) to purchase materials, sign up for a subscription, or to make a one-time or monthly donation. Thanks so much!

* Try Our Custom Google Multiple Site Search: You'll save a ton of time and find what you're looking for! This service provides time-saving customized multi-site Google search! Let's say you're looking for a particular report on 2020 election fraud and Google doesn't want to show it to you. Well, here's how to get what you want and to use Google against Google! Just click on this Multiple Conservative Site Search and enter whatever conservative news story you're interested in. And viola! It simultaneously searches the top 30 conservative news sites in the U.S. and Canada, including the anti-abortion LifeSiteNews.com service. So you'll get your search results in a second!

$1,000 Matching Offer from Puerto Rico: If you can possibly give $1,000, a listener in the Carribean will match that to make a total of $2,000 toward our telethon and that will put us over the $10,000 mark! (This listener is doing this to recognize the work of one of our RSR producers, Larry Wolfe, an retired IBMer with LASER patents to his name.)

Assistant District Attorney (ADA) Connie Rubirosa says, "I grew up thinking Roe v. Wade was gospel. … But [now] I don't know where my privacy ends and another being's dignity begins."

Executive ADA Michael Cutter, played by Linus Roache, was quoting real-world surveys when he said, "The tide has turned. Most Americans are pro-life now."

Cutter virtually quoted the co-sponsor of Colorado's 2010 Personhood Amendment, Gualberto Garcia Jones, who launched the statewide ballot initiative holding his 10-day-old son at a press conference and saying, "Two weeks ago, my son had less rights than a dog or a cat." Speaking to District Attorney Jack McCoy, Cutter says, "My God, cats and dogs have more rights than the unborn."

Other items of note: a detective rejected abortion after rape; fetuses were referred to as "persons;" and even the pro-choice mom who, against her doctor's advice, did not abort her premature baby and found out in the hours they had together that her child "wasn't a monster, like the doctors warned me."

* Check Out Also: Our July 9, 2011 interview of World Tour with Guabe at kgov.com/gualberto.