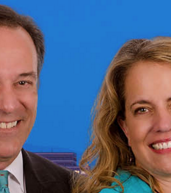 Bob Enyart today aired his phone call from yesterday to Steve Kelley and Krista Kafer, Christians who host a drive-time show on another Denver station. Krista would use the power of the government to sue her employer, as she said, to get more money out of him if she believed that he was paying a man more money for equal work. As at kgov.com/economics, Bob pointed out that God said, Thou shall not steal, so that neither Krista nor the government has the right to take money by force from a business owner to give it to someone else. He also referenced the Lord Jesus in Matthew 20 asking in a parable, Is it not lawful for me to do what I wish with my own money? Bob wants to pay a father an extra $10,000 a year to bless the man's wife who wants to be a homemaker and not be compelled to put her children in daycare and to enter the workforce because her husband's boss is being sued. The politics of envy destroys more than economies. It destroys families. And in addition to Thou shall not steal, God also said, Do not covet your neighbor's goods, and that includes your boss' and your co-worker's money.