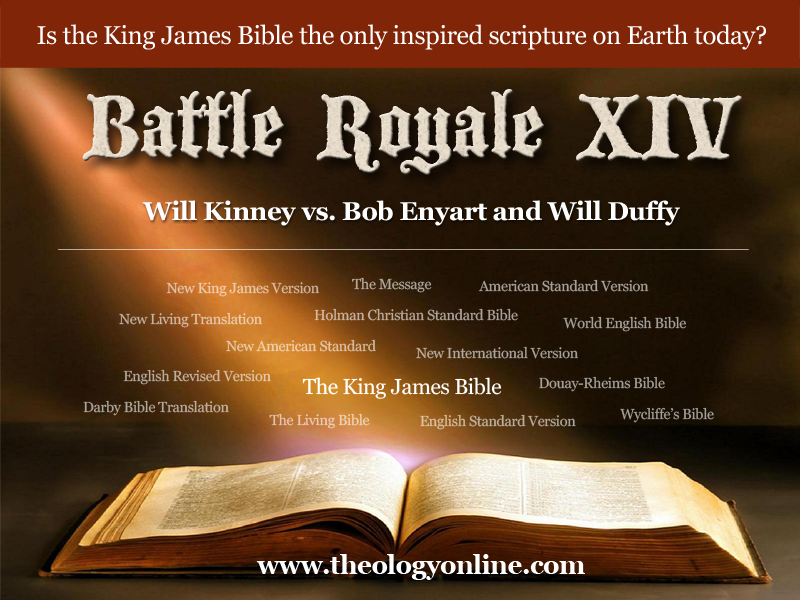 * See Our King James Only Debate at TheologyOnline.com: Just click this TOL link or on the graphic just below.

Note: In March 2019, TOL will be down for maintenance for some time. See notice.

* Never-Before-Published Notes: In September 2015, Real Science Radio host Bob Enyart and associate Will Duffy traveled to Oxford University to study the 1602 Bishops’ Bible used for about seven years through multiple stages of the King James translation project. The translators themselves modified the Bishops' Bible with thousands of margin notes, most of which became the text of the 1611. Many of the errors in the 1611 (which King James Only leaders acknowledge because at places the text differs substantively from that of their newer versions, but which errors the KJO camp attributes to the printers) we found to be errors of the translators and not of the oft-maligned printers. The marginalia of the translators, never-before-seen by the public, make this case! To see for yourself, just click this KJO Debate link and then scroll down looking for the photos of the translators' hand-written notes that ended up, 400 years later, ironically, testifying on behalf of those refuting the King James Only position!

* Announcing Upcoming King James Only Debate: Bob Enyart and Will Duffy, of Denver Bible Church, will be debating a leader in the King James Only movement, Colorado's Will Kinney. The five-round written debate will take place on TheologyOnline beginning Monday Nov. 2 and is titled: "Is the King James Bible the Only Inspired Scripture on Earth Today? Battle Royale XIV". We'll use this kgov.com/kjo link to keep you updated, and you can click here for KJO Debate Countdown Clock and here for the BR XIV Rules and discussion thread!

* Bob & Will Duffy Reporting in from England: As explained below, in preparing (or should we say repairing :) for this debate, our research has led us to Oxford University in the United Kingdom. The photo shows Will Duffy in the rare reading room of Oxford's Bodleian Library studying the 1602 Bishop's Bible which is filled with thousands of hand-written interlinear and margin notes. The King James translators used this particular copy, cataloged as Bod. 1602, for seven years as they changed the readings of the Bishop's Bible into what became known as the King James Bible. Our time here in Oxford has borne so much fruit already that we've put off heading out to Cambridge to continue our work here. We are grateful to Doug McBurney and the KGOV staff for keeping shop for us while we're out of the country and look forward to returning. And in the meantime, we hope you enjoy two special BEL programs and two special Real Science Radio programs that we've selected to share while we're away. May God bless you! - Bob and Will 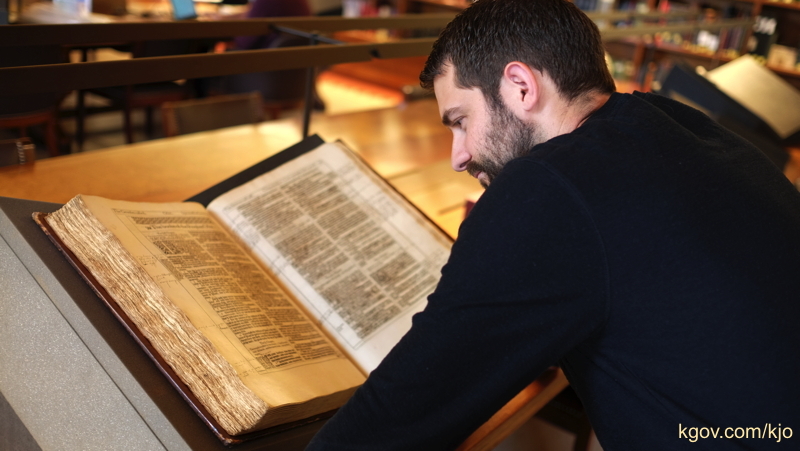 * Help BEL Prepare for the KJO Debate: If you'd like to help the BEL team prepare for this debate:
* If you live in Colorado, contact service@kgov.com to find out about our Monday night preparation meetings.
* If you are known to the BEL crew and want to help with research (reading/viewing videos/etc) email Bob@kgov.com.
* If you'd like to help financially you can consider:
- A few more books needed as of Sept. 30, 2015! We've rec'd almost all the reference books needed for the debate that we listed at KGOV's Amazon.com Wish List and there are just two more that we could make great use of. Please consider purchasing that for this debate effort. Thank you guys! 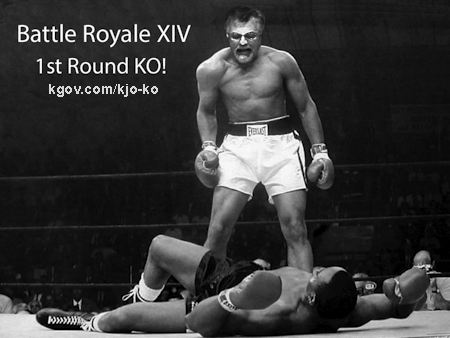 - Our ongoing debate research is leading Will Duffy and Bob Enyart to travel to England beginning on September 13th to access documents otherwise unavailable to the public. Will has urged Bob to take this trip for the possibility that this research could add real value to the collective knowledge of the Body of Christ about church history regarding Bible translation. (Update: Will was exactly correct, as shown in our debate graphics!)
* Please pray that the correct side in this debate will prevail and that this will become a leading resource for those involved with this controversy.
* P.S. To make full use of our time in England, our Real Science Radio producer has also arranged for Bob to interview in person professors from the Universities of Liverpool, Leeds, and Portsmouth, and perhaps one from Oxford. So please pray too for the effectiveness for these toward the saving of souls and the further equipping of believers to share the Gospel! 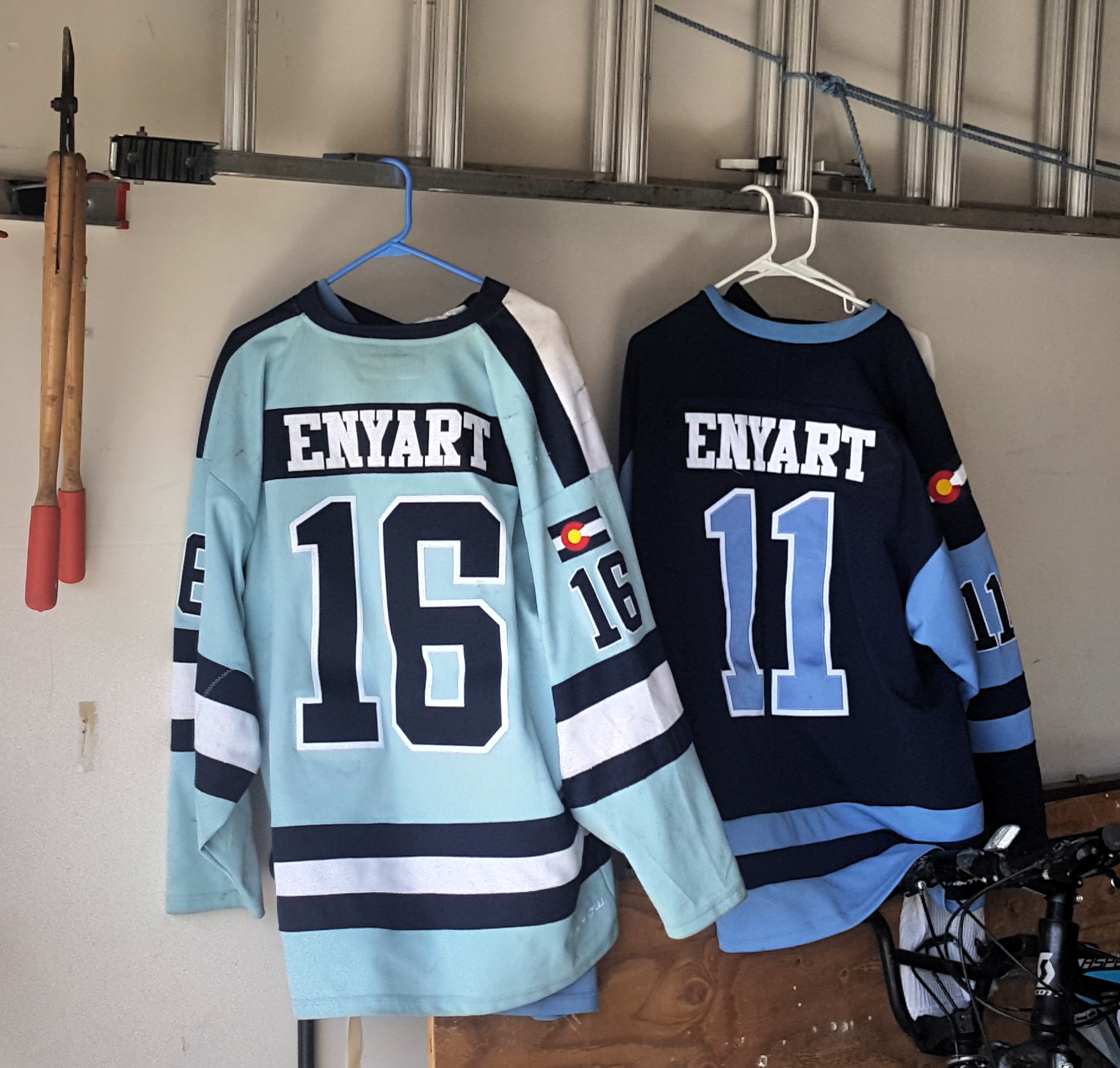 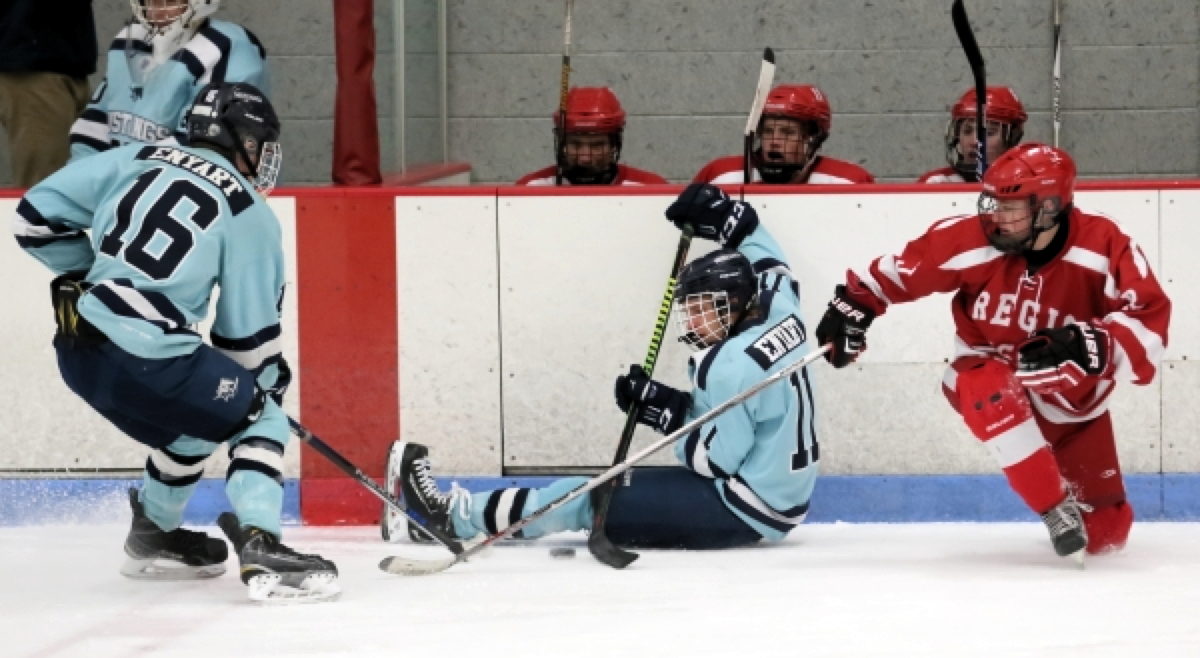 And here are two more of Dom's photos, one from early in his hockey years and the other from 2019 when, even though playing hockey as a homeschooled kid, Ralston Valley High School awarded him the nationally-recognized Hobey Baker award.

* On Today's Radio Program: Bob & co-host Doug McBurney discuss Bob’s recent trip to England and Oxford's Bodleian Library to research Bible translations and interview scientists. Tune in to get all the details regarding the actual translation process carried out over 400 years ago! And find out which three, (or four) BIG time scientists are young earth creationists! And hear tomorrow's conclusion of Bob's UK trip report.