April 20, 2021 Update: With the show trial's guilty verdict in, at BEL we will re-evaluate the case. In the meantime we've modified the wording of our first sentence, below...

Former detective (and now fisherman and a fisher of men) Kevin Hill joins Bob Enyart to discuss the death of George Floyd and the actions of Minneapolis police officer Derek Chauvin.

July 7, 2020 Update: See this transcript apparently from the body cam on one of the officers.

At 6:55 into the NYT's important video (see below), onlookers yell out, "Check his pulse! Check his pulse!" As of the time of this BEL broadcast the ensuing riots have resulted in at least a dozen deaths.

Donald Trump (who we strongly oppose including for his funding of aborting a million black babies and many other children) was correct when he stated that looting leads to shooting, and it leads of course to other ways that rioters, and victims, die in riots. Then, wickedly, at the end of the New York Times video and as expected, the paper effectively justifies the violence of the Floyd riots by describing the past week's violence, looting, murder, and arson as,  well, as understandable outrage. No, like Chauvin's killing of Floyd, the premediated riots are not understandable. As for Chauvin's guilt, the Minnesota complaint, as shown above, indicates that officer Kueng checked Floyd's wrist for a pulse and could not find one. Yet the knee remained for another two minutes. See more about the charges, just below, and please consider our kgov.com/list-of-ways-to-reduce-crime.

* Homicide, Murder, Negligence: Among further particulars in the Floyd case to note, the very top "subdual" line of the county's autopsy supports their cause of death finding released a week later of:
- "Manner of death: Homicide" and
- "Cause of death: Cardiopulmonary arrest complicating law enforcement subdual, restraint, and neck compression".

Some have been under the impression that the coroner found a substance-abuse cause of death whereas they did find drugs but not as the cause of death. Some have also claimed that Floyd didn't die at the scene. However, the one-hour later "time of death" was the time when a doctor certified him as dead. The coroner, like the family's autopsy, apparently found that Floyd died while his neck was being compressed. Reviewing the pulse matter, recall that onlookers yelled out, "Check his pulse! Check his pulse!" The complaint quotes Officer Lane saying, "I am worried about excited delirium or whatever" (by which he meant, as Det. Hill points out in today's BEL broadcast, positional asphyxia, with delirium as a complicating factor). Chauvin said (to his credit), "That's why we have him on his stomach." Then at at 8:24:24, Floyd stopped moving. A minute later Officer Lane asked again in vain if they could "roll him on his side." At 8:25:31 Officer Kueng said, and this seems to be among the most serious evidence against Chauvin, that he couldn't find a pulse. Still, Chauvin kept his knee on Floyd's neck for another couple minutes. It seems that anyone who objects to a murder charge would have to take from this information, provided that it is accurate, and conclude that at the very least, Chauvin is guilty of negligent homicide. However, as mentioned below for example in former Judge Jeanine Pirro's recounting of the case, it seems that there is more than sufficient warning to Chauvin to justify a murder charge. Emotions don't usually help sort things out. But those who disagree can try imagining that it was one of their kids on the gorund. I think they could see, as Pirro points out, every single warning given to Chauvin as something he had to consciously reject in order to continue pressing on.

We've said on air that the Black Lives Matters heros, which includes Floyd, are all thugs, addicts, criminals, and drunks. Floyd was a bad guy, on drugs, and uncooperative. And regarding Jeanine Pirro, I am no fan of hers either. But the recounting of the case against the officers from this former D.A. takes into account more lines of evidence than just the one video that most people have seen. I believe she is far more correct than incorrect (even though Pirro may have been incorrect in what she says about their department policy). 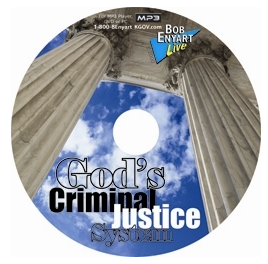 Today's Resource: Have you seen the Government Department at our KGOV Store? We are featuring our classic God's Criminal Justice System seminar and our important videos God and the Death Penalty, Live from Las Vegas, and Bob on Drugs DVDs, and our powerhouse Focus on the Strategy resources!

For Christianity is a fighting religion. It thinks God has made the world- that space and time, heat and cold, and all the colors and tastes, and all the animals and vegetables, are things that God ‘made up out of His head’ as a man makes up a story. But it also thinks that a great many things have gone wrong with the world that God made and that God insists, and insists very loudly, on our putting them right again.

* KGOV Wrong About a (non) Fake News Photo: See kgov.com/fake-news for the explanation of how BEL came to wrongly conclude the photo of a burning kiosk was fake (after Matt Drudge's use implied that an L.A. police station had be set on fire).