* Intelligent Design Uncensored: Dr. Philip Skell, a member of one of the world's most elite science associations, the National Academy of Sciences, describes this Intelligent Design book by William Dembski and Jonathan Witt as, "A five-star fantastic voyage!" After reading this enjoyable and educational book, Real Science Radio host Bob Enyart talks to Dr. Witt about intelligent design and the surrounding controversy.

* Atheist Circular Reasoning and Eugenie Scott: Dr. Witt points out that atheists like Darwinist Eugenie Scott make a circular argument claiming that only material explanations are "allowed" in science (including for origins), and then they claim that science thereby proves that only material causes exist. Consider that Dr. Scott is attempting to use logic, which is not material, to argue for methodological materialism, which rejects the validity of anything not material. (Bob Enyart has debated Eugenie Scott, and for the 10-year anniversary of that program, RSR Exhumed Eugenie and replayed that debate in which she claimed explicitly that all non-coding regions of DNA were affirmatively known to be useless, that further research would not show otherwise, and so that Junk DNA was the best evidence she could offer against the existence of a Creator.)

* Investigating the Claimed Materialistic Origin of the Cell: While taking the audience on a tour inside a living cell and discussing its extraordinary complexity, Dr. Witt recommends the book, The Signature in the Cell, by Stephen Meyer, to investigate the naturalistic origin of life claims. Cell animation, as in this narrated YouTube video, is helping the general public become aware of the intensive cooperation of thousands of complex machines within each cell:

* 60% of the Applied Science of Medicine Is Doubting Secular Darwinism: As infamous atheist Lawrence Krauss said, falsely, to Bob Enyart, "All scientists are Darwinists." To combat such typical gross exaggerations, RSR points to scientists and professors, including the 600, 3,000, and 100,000, who deny or doubt Darwinism. Further, to rebut that claim, and to address the related exaggeration that "most educated people know that God was not needed for the appearance of life," Dembski and Witt report on a study conducted by the prestigious yet pro-evolution Louis Finkelstein Institute (pdf of the Jewish Theological Seminary press release). Of U.S. medical doctors, 60% believe that God was involved in the creation of mankind! To discredit the relevancy of these findings, evolutionists will turn against these Ph.D.s, in an effort to minimize their science education and experience. However, medicine is an "applied science", and 60% of U.S. medical doctors reject the strictly secular Darwinist explanation for our existence. The large sample (for a study of medical doctors) of 1,482 MDs were asked in Question 7 (pdf) of the Finkelstein poll if they agreed with:
- "God initiated and guided an evolutionary process that has led to current human beings." 42% agreed.
- "God created humans exactly as they appear now." 18% agreed. 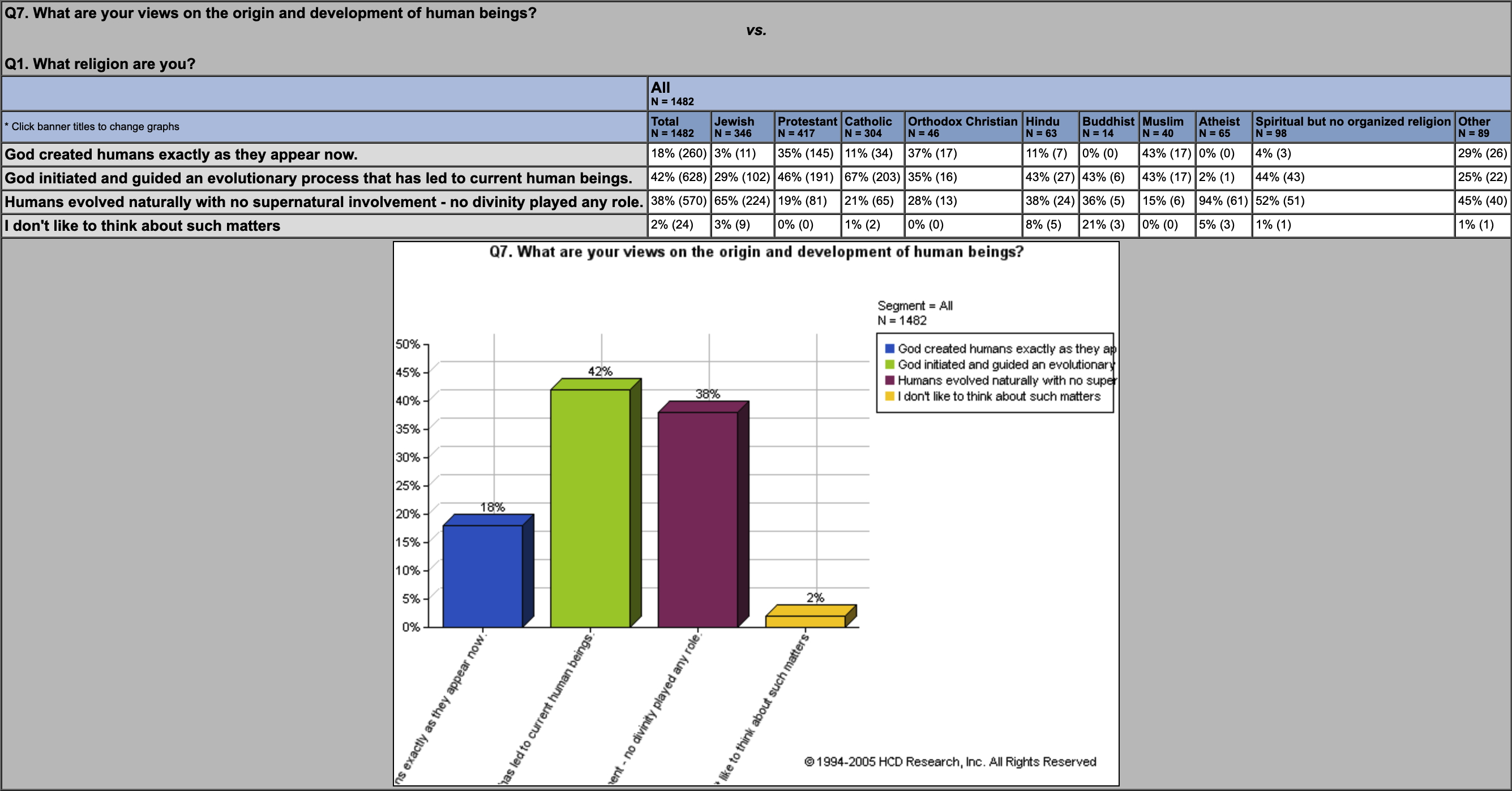 * Hawking's Circular Reasoning Exposed on Origins: Hawking says that the matter of the universe came from energy borrowed from the gravitational energy of the universe, to which Real Science Radio asks, "What universe?" If you're explaining the origin of the universe, you cannot appeal to the universe itself. And Hawking claims that the laws of physics produced the universe even though 1) Big Bang cosmology claims that those laws did not exist prior to the Big Bang and 2) laws can't do anything. For example, the law of the conservation of angular momentum doesn't make anything and doesn't start anything moving. Newton's laws of motion don't make billiard balls move on a table but rather, they explain movements that occur.

* Go to the Moon to Avoid Global Warming: First, end-of-the-world doomsday prophet atheist astrophysicist Stephen Hawking wants mankind to respond to the problems of global warming by colonizing the Moon or Mars evidently forgetting that the Moon's daytime temperature is over 200 degrees (107 C) and that neither location has liquid water or oxygen. The Sun is Earth's source of global warming, and because Mars is 50 million miles further from our Sun, its temperature ranges from 1 degree F down to 178 below! So mankind should flee from a temporary one degree fluctuation in the Earth's temperature into about 200 degrees, above and below zero, and say good-bye to liquid water and oxygen. And if global warming is so threatening to mankind, why does Hawking overlook the more logical safe havens of Antarctica, Greenland and Siberia?

* Please Note - ID and the Age of the Earth: If you Google: dinosaur soft tissue, you'll find probably on the first page out of 19,000 our KGOV.com/dinosaur-soft-tissue report which is currently outranking phys.org, Science Daily, Discover Magazine, PZ Myer's scienceblogs.com, Wikipedia, etc. (and even Answers in Genesis). We know at least a bit about arguments for the age of the earth (as seen also at our annual List of Not So Old Things). The Intelligent Design movement, including Jonathan Witt, accepts the claim that the earth is billions of years old. However, the ID movement has never addressed the flood of "soft-tissue" dinosaur finds (now that it's no longer taboo to look for biological material in fossils), nor the fast-decaying Carbon 14 found everywhere it's not supposed to be including in amber, dinosaur fossils, and in diamonds, nor the rapidly growing list of phenomena for which secular scientists have replaced the "millions of years" claim for formations that occured in years, months, or even in minutes.

With all that said, we are thankful for Dr. Witt's testimony for the Lord Jesus Christ. And just as we use discoveries from Einstein and Hubble, we are eager to use scientific evidence against evolution amassed by Phillip Johnson, Stephen Meyer, Michael Behe, Charles Thaxton, William Dembski, Dr. Witt and others in the ID movement. But we hope that they will re-evaluate age in light of the mountain of evidence for a young earth. After all, realization that the evidence demonstrates that the earth is young is a virtually 100% effective antidote to atheism.

* Hawking: The Aliens Will Be Mean: Stephen Hawking is urging mankind: "Don't talk to the aliens!" Why not? They may be mean! (Like on Star Trek, no?)

Today’s Resource: At our kgov.com/store you can get the fabulous Spike Psarris DVD What You Aren't Being Told About Astronomy! You may especially enjoy browsing through our RSR science department!