* Today's Topics - The Fox Apology, North Korea, and a Resignation: After discussing the apology from FNC during today's broadcast, Bob then discussed what would be justified grounds for war with North Korea, and he then read his resignation letter from a legislated Denver-area school district accountability committee.

Fox News Channel Apologizes to Bob Enyart: Just before Bob's final talk for the week on God and Science at Indiana's Turkey Run State Park, Bob received a call from Kevin Lord, Fox News Channel's executive vice president over human resources. Bob accepted Kevin's apology on behalf of FNC for the extreme sexual harassment he endured years ago at their studios. (Lord is the former GE human resources officer and NBC News executive vice president of human resources.) Bob has therefore decided not to pursue the matter further against Fox. For the record:

Thank you for your email. Would you please reach out directly to Lisa Bloom? She's expecting.

Wendy Walsh
Sent from my iPhone

I was busy before and just found time to read your email in detail. Thank you for being so brave to send. And, I'm deeply sorry this happened to you.

Sent from my iPhone

[2019 Update: Enyart's interaction with Bloom occurred of course before the public exposure of Bloom's attempts to hurt the women accusing Harvey Weinstein while he was paying her $890 an hour.]

I'll just paste here what I messaged to Wendy on her FB page, similar to my email to Ross K who conducted that encouraging radio interview today.

Wendy, if men can be sexually harassed too, then I was sexually harassed at FNC, and it was captured on video. [unrelated paragraph cut out from here but pasted below] To whatever extent the repeated headlines about Fox may be true, they are constant reminders of what happened to me there. I'm the long-time pastor of Denver Bible Church. I was flown in to NYC from Colorado as a conservative radio show host to appear on-air [on the Full Nelson hosted by Rob Nelson] with other guests including rapper Coolio [and Shae D'lyn from Dharma and Greg]. This was quite a while ago but the sexual harassment was severe; it was laughed at by those who saw it happening, and it occurred in one of the FNC studios during taping. What happened was then actually aired nationwide, including of course here in Denver where my family, friends, and church saw my humiliation. During the scheduled one-hour panel appearance for a Sunday night program, while we were taping, I removed my microphone and walked off the set. This was about 10 minutes into the program when another guest, an actress from a popular Hollywood sitcom [Shae D'lyn Sheretz , got up out of her chair and walked over to me and began giving me a lap dance. I was basically trapped in my seat during a live-to-tape program with a woman sexually mocking me. She disapproved of my views and was giving me treatment so that I could overcome being a prude. Ironically, I had been invited by Fox under the pretext that they wanted to hear my concern about sexually coarse and degrading behavior. What a joke they played on me. The FNC host, Rob Nelson, of The Full Nelson [began airing on FNC in the summer of 1999], was chuckling and obviously approved of one of his guests being sexually harassed by another, as this young woman performed her lap dance on me. The other guests and even the studio crew all seemed to express that this was just great fun. I was devastated. I didn't say a word. Instead, I just took off my microphone, stood up and left the set. My brother Brian Enyart was there watching off camera. He lived in Hawthorne, N.J. and had come to the city to watch his brother appear as a guest on a national TV program to call for more decency in our culture. On the street, we immediately asked directions for and walked directly to the nearest NYPD station. We both spoke for a few minutes to an officer who was polite and professional but who didn't want to take a complaint and said something like, "This was television right? This was at Fox?" And in a way, maybe he was right to dismiss it as just Fox being Fox. Because the network then took my humiliation and turned it into a 15-second promo that ran repeatedly over many days until that show was broadcast. Maybe it helped the ratings.

I recently contacted Fox (as though they needed me to tell them what had happened). And, like you Wendy, I said to Fox (in private communications) that I have no interest in any legal action and that I'm sure any harassment statute of limitations would have expired anyway. (This happened when NYC's "wildings" were in the news.) Perhaps you or Ms. Bloom might be able to suggest whether an affidavit from me might help assess whether there has been a systemic culture of harassment at FNC. Because the promo aired so many times, that had to occur with the editorial, management, and executive support. And as with you Wendy, for me, an apology from Fox seems to in order.

p.s. I am not a sympathetic victim. I am considered a caustic right-wing Christian fundamentalist and though the widespread representations of me are primarily misrepresentations, I do want you to know that I'd be considered a victim with "baggage".

Hi Bob. Thanks for writing to me. I am sorry you had to endure this. Your pain from it is obviously very real. You should have been respected, rather than set up this way.

If you are talking about the 1990s, yes, the statute of limitations has run. I'm glad you recently contacted them about it. I have represented sexually harassed men and I know how disturbing this type of experience can be.

Please keep in touch and let me know if you get a response from them. Good for you for standing up for decency.

This message is for the designated recipient only and may contain privileged, proprietary, or otherwise private information. If you have received it in error, please notify the sender immediately and delete the original. Any other use of the email by you is prohibited.

Lisa, your words are an encouragement. Yes, if Fox replies, I will certainly let you know. And thanks also for helping Wendy.

Dear Bob: we have received your email.

Ms. Nussbaum, in case someone on the Fox investigation would like to see how far back in time that sexual harassment has been a part of the FNC corporate culture, here's my email discussion with Wendy Walsh and Lisa Bloom.

Thank you for reaching out, Bob.
I can’t think of anything I can “do” with it, but that experience is something else.  I’d never heard of it until now.
I read your Wikipedia entry and especially enjoyed the O.J. incident.
When I was young, my 18-year-old sister and her boyfriend were murdered by a serial-killer-wannabe. As difficult as that experience was, I can barely imagine if her killer had been a celebrity that people fawned over and declared to be innocent.
I remember a handful of years ago when HarperCollins, owned by News Corp (the parent of FNC), was going to publish O.J’s book.  That would’ve happened except for my boss, Roger Ailes, threw a fit and they shelved it.
Thanks for you note!
—Ken

Ken, thanks for your thoughtful piece at Mediaite. I'm one of those folks who have tended to believe the accusations, because of what happened to me at Fox. But then of course, accusations are just that. I don't know that you'd be interested, and I don't even know why I'm sending this to you. I realize that it makes me look like a media harlot to send this around as you can see below, but after all these many years, I'm still angry about the sexual harassment that happened to me at FNC. So, just in case you're interested...

Mr. Burstein, hello. My FNC ordeal, caught on videotape, shows that sexual harassment has been a part of the Fox corporate culture for many years, which is supportive of the allegations of Ms. Tantaros. I pasted below my email discussion with Wendy Walsh and Lisa Bloom, and the reply back from Paul Weiss acknowledging my email. My own motivation is that Fox is held more fully accountable for their terrible behavior. - Pastor Bob Enyart, Denver Bible Church.

[cut out unrelated text from above to Ms. Bloom:] First though, it may help Lisa Bloom if someone can find the video clips that will show the pattern of Bill O'Reilly frequently inviting his beautiful women guests out for dinner. My wife and I have watched for decades. We never noticed him doing this with men, overweight, or older women. He only asked out beautiful female guests, and even associates, as we recall, and sometimes perhaps in the context of a wager. This appeared to us as though O'Reilly were flaunting his prowess by actually hitting on these women right out in the open, on national TV, for everyone to see. We believe that particular behavior stopped suddenly just a few years ago after his most recent sexual harassment settlement. Secondly, I was sexually harassed at FNC and there is video evidence of what happened.

* This sexual harassment at FNC is also footnoted online on the pre-recorded broadcast that aired on the same date that Fox called Bob Enyart, over at kgov.com/fox-news-channel-apologizes-to-bob-enyart-for-sexual-harassment.

* 11 Seconds from O'Reilly's Penultimate Show: Captured on the BEL YouTube channel, this brief clip from Bill O'Reilly's second-to-the-last appearance on his own FNC show, reveals more than just the stress of a bad month. (To understand, see the video description over at our channel.)

Today's Resource: BRAND NEW: The Book of Isaiah -- Thus saith the Lord. From the first chapter to the last, through this ministry in Judah, God’s voice is heard loud and clear. Not surprisingly, the Hebrew prophet Isaiah confronts the church and the political leaders of our day as forcefully as he did 2,700 years ago the ancient nation of Israel. Bob Enyart’s verse-by-verse study of the life’s work of this great prophet reveals the heart of God. As we turn the pages through the book we learn without any doubt of the LORD’s priorities. In this high-quality presentation of these studies, you will hear the question asked: Are God’s priorities those of today’s religious leaders? Are they yours? So join us as the fascinating chapters fly by from the virgin birth prophecy in Isaiah 7 to the Suffering Servant of Isaiah 53 and from the Lord’s First Advent to His Second Coming! 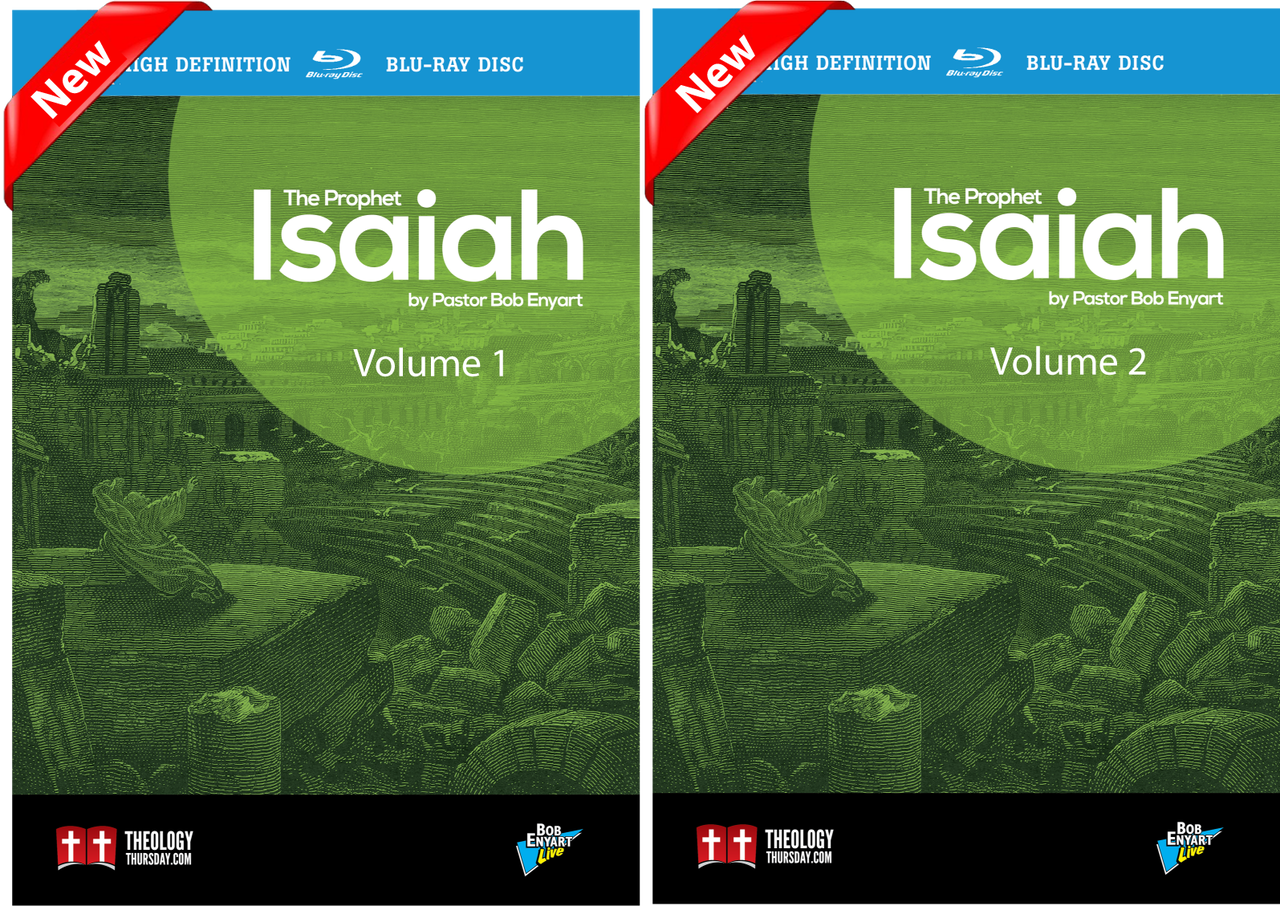