Astronomer Danny Falkner on RSR on the Flat Earth 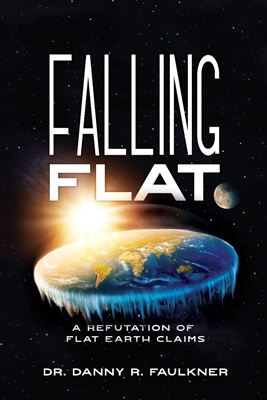 * The Scope: Seven percent of Brazil's adults believe the Earth is flat; 10% of the French doubt it's a globe; and ScienceAlert reports on a YouGov survey showing that nearly three million U.S. "adults" 18 to 24 claim the earth is flat. Meanwhile, the global young earth creation movement rescues people out of the flat earth movement.

* The Interview: Bob Enyart interviews a Ph.D. in astronomy Dr. Danny Faulkner on his book, Falling Flat: A Refutation of Flat Earth Claims. Dr. Faulkner says that at the beginning of their first semester, none of his students at the University of South Carolina were able to answer his question, how do we know that the Earth is a sphere? But, as we would expect, when he taught at a Christian high school, his new students there were able to answer his question. Danny describes for our Real Science Radio audience the cosmology of the flat earth movement including their claim about the shape of the Earth, a dome with embedded stars, and a spotlight sun and moon, and their common conflation of geocentrism with their flat earth syndrome. The guys also discuss the Columbus myth, the modern fabrication that the church had ever taught a flat earth, the Christian creationists Copernicus, Newton, and Kepler, who introduced and explained heliocentrism, and the causes of the modern flat earth movement including paranoia and the horrendously poor state of science education in the west. Finally, Dr. Faulkner and Bob discuss some of their favorite arguments against the flat earth.

* The Chicago Photo: While Bob and Dr. Faulkner discuss how the weather affects light, check out the December 26, 2019 photographs of an eclipse on the horizon over the Persian Gulf.

* Young Earth Creation Movement Rescues Flat Earthers: The massive, worldwide young earth creation movement rescues people out of the flat earth movement. Here at Real Science Radio we hope research will be conducted to determine who is more likely to believe the earth is flat, folks who graduated from Christian home school or from public school? Hopefully it's not from bias, but we predict that publicly schooled people are significantly more likely, partly because of their poor science education and partly because so many are potheads.