Real Science Radio host Bob Enyart interviews The Creation Guys Kyle Justice and Pat Roy about their latest hit, Faith on the Edge: Flat Earth Documentary. They talk to experts including:
- Apollo 16 astronaut Gen. Charlie Duke
- Astronomer Dr. Danny Faulkner
- Hebrew professor (from Christopher Cone's Calvary University!) Dr. Steven Boyd, and
- Victor Brewer, Aerial Image Solutions.
Some of the highlights:
- the recreation of the UK's famous Bedford Level experiment (now with accurate and predictable results)
- explaining why the Chicago skyline jumps up and down when photographed from across Lake Michigan (except for on cold days)
- watching a container ship sail toward Europe from the East Coast
- amazing astronomical observations in the southern hemisphere (including the Sun never setting!)
- the launch of a weather balloon to conduct a breakthrough experiment.
Faith on the Edge made an RSR staffer say, "I've got to buy this for my grandkids!). The guys also present the flat earthers' claim that they take the Bible literally, but of course, not for any of the verses that contradict their syndrome, such as that God "hangs the Earth upon nothing" and "from the rising of the sun".

And from our own rsr.org/flat-earth page...

Have you noticed that the "man in the moon"
is upside down in the southern hemisphere? 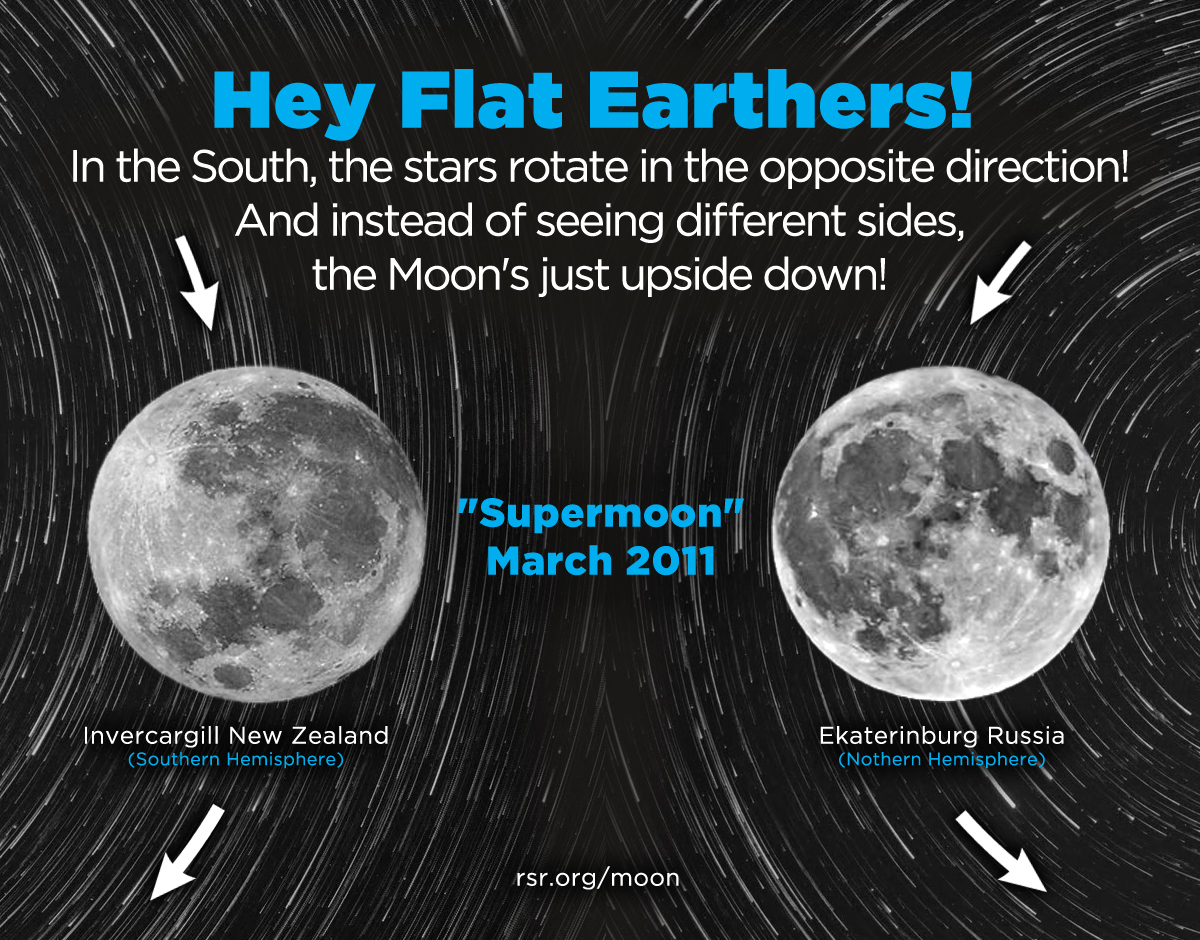 Accomplished! Thanks guys! BEL Minor YouTube Milestone Request: "Hi guys! Bob Enyart here. We're almost at 2,700 subscribers (it's free!) to our BEL YouTube channel. If you're interested, can you click on over to youtube.com/user/BobEnyartLive, subscribe and "hit the bell"? (Whatever in the world that last bit means.) Thanks so much!"

* Desperate Wives Emailing About Flat-Earther Husbands: Reaching out to the Creation Guys, these wives have husbands who have been captured by the Flat Earth movement, distracting these men from their God-given responsibilities of being husbands, fathers, and proclaiming the Gospel.

I pray this reaches many more and applaud you for your efforts! I struggle everyday with my husband’s focus on what he thinks are lies and conspiracy. And it has changed him into an angry individual we don’t really recognize. And although he claims it proves God, he is so far from our amazing Father. He stopped reading the Word. He doesn’t go to church. He has removed himself from everyone and lives basically in isolation. His drinking has increased to be yet another problem... this cult is real and it is hurting people! I pray every day that God will use me or send someone to show him the way out! Sorry this is so long, but Flat Earthers ruined my life!!!! Spreading lies and confusion. Satan loves to cause confusion!!!!”

My husband is a flat earth believer, and everything that you all debunk are the talking points he has used to try to convince my son and I (and really everyone else) that the earth is flat. Not only do I appreciate the experts you have on, but I especially love how you share the gospel and speak on the true meaning of why we are here in the first place. It's all about Jesus and the shape of the earth is irrelevant and is clearly such a huge distraction. It has been such a trying time in our family with his flat earth evangelizing and I fear that it is taking the place of where he once had Jesus in his life. He tries to discredit the bible all the time and has no interest in serving anymore. He barely wants to attend church and his flat earth talks have caused such division in our home because he gets so loud and hostile about it to me and our teen. This has led to our son not wanting to be around him alone much anymore or even have friends over in fear of what my husband may say. It has really become a bit of a desperate situation. Could I ask that you all please pray for us too?