John Calvin's Calvinism: God is the Author of Sin 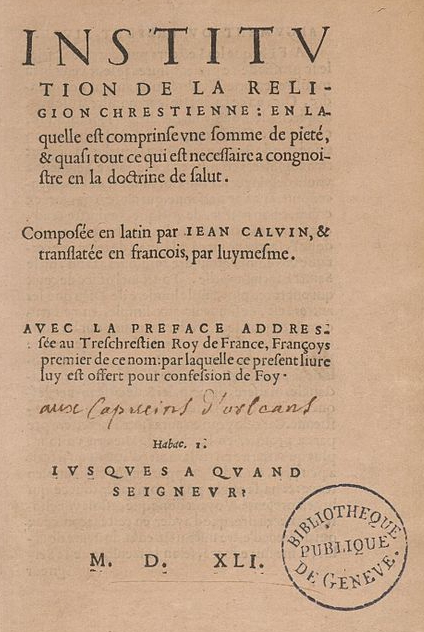 * Duffy Challenges Producer Lanphere about Freedom to Sin: Will Duffy pointed out to Les Lanphere, the producer of the film Calvinist, that by the doctrines of Calvinism, men are not even free to sin. So he asked the producer, Does your film admit that Calvinism teaches that man is not free to sin? After all, John Calvin himself taught that men can only sin by divine decree and that they are unable to sin in any way other than how God decreed that they would commit each of their sins. Of course, Calvinists like Lanphere happily argue that men do not have free will, nor the freedom to choose God, nor the freedom to do right. Simultaneously though, they avoid discussion of the Calvinist teaching that men are also not free to sin, either. By Calvinist philosophy, men have no freedom to choose evil, or one sin over another sin, or to do anything outside of the divine decree. And because the eternal divine decree allegedly includes every thought, every desire, every action, and the history of every bit of matter, therefore by Calvinism men are not free to do good, nor to sin, and they can only do the wicked and perverse things that, before they were even conceived, they were decreed to do. (When Calvinists reply, Yes, but men sin just as they desire to, of course, by Calvinist philosophy, those men were unalterably created to desire and to commit the specific sins that they commit.) Lanphere responded but by avoiding the substance of Will's challenge. (Hear this at 16:30 into today's program and click here for Part 2 of today's program.) 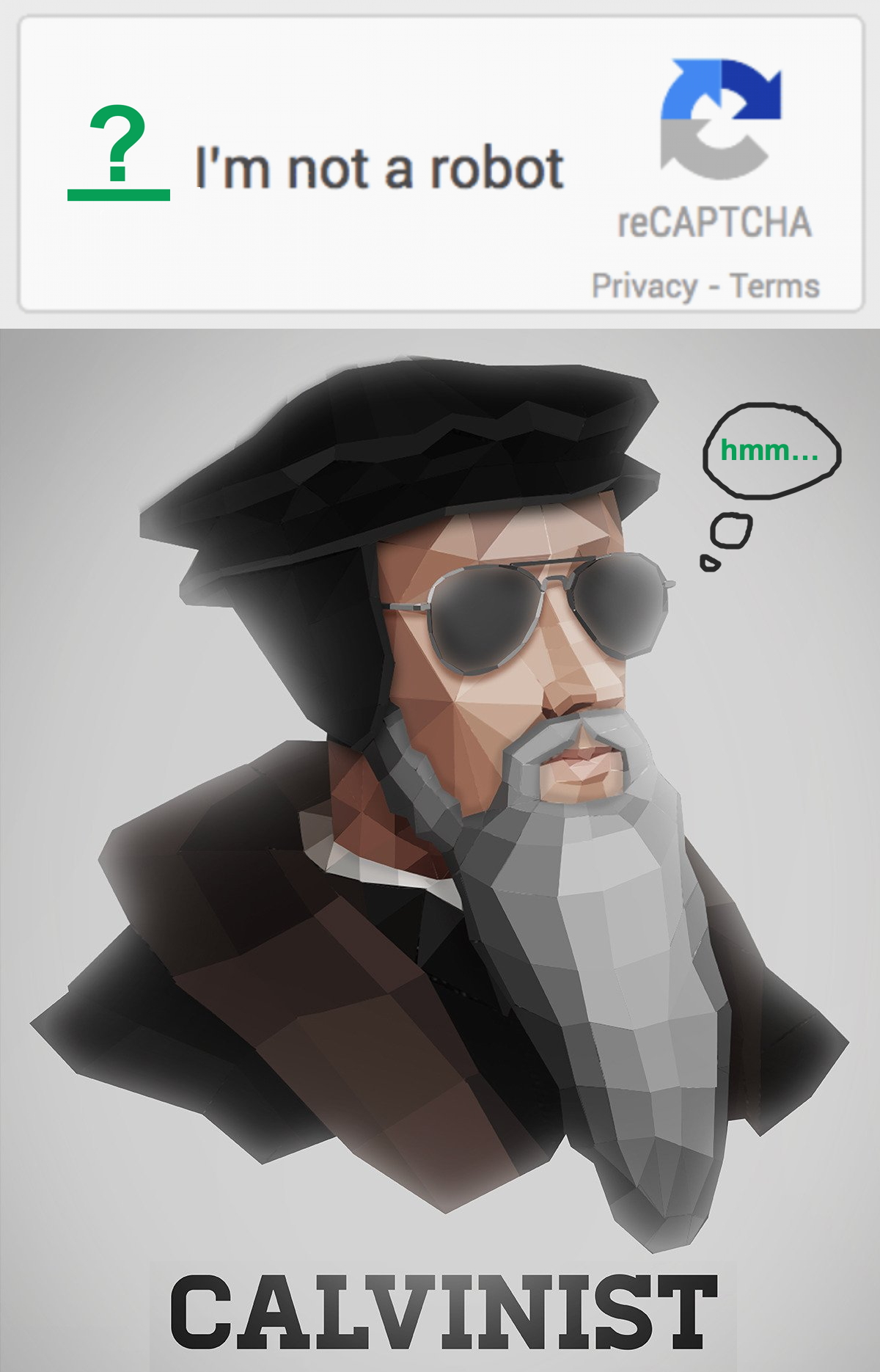 "Yes, they can be saved. Regardless though,
Calvinists are intellectual reprobates." -B.E. 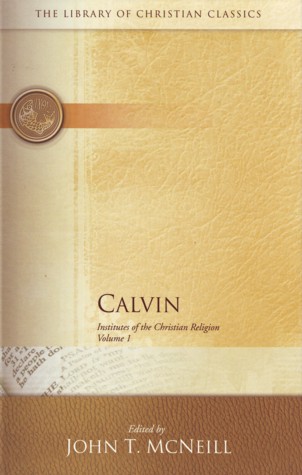 * God is the Author of Sin according to these Quotes from John Calvin, Institutes Book One, Chapter 18: All Calvinists (including Matt Slick) concerned with defending God's holiness should repudiate these tragic claims by John Calvin from Chapter 18 which begins on page 228:

"And now I have already shown plainly enough that God is called the Author of all the things that these faultfinders would have happen only by his indolent [lazy] permission." [That is, Calvin tragically but explicitly claims here that God is the "Author" of sin. Every obfuscating Calvinist should be asked to repudiate John Calvin's this teaching on this.] 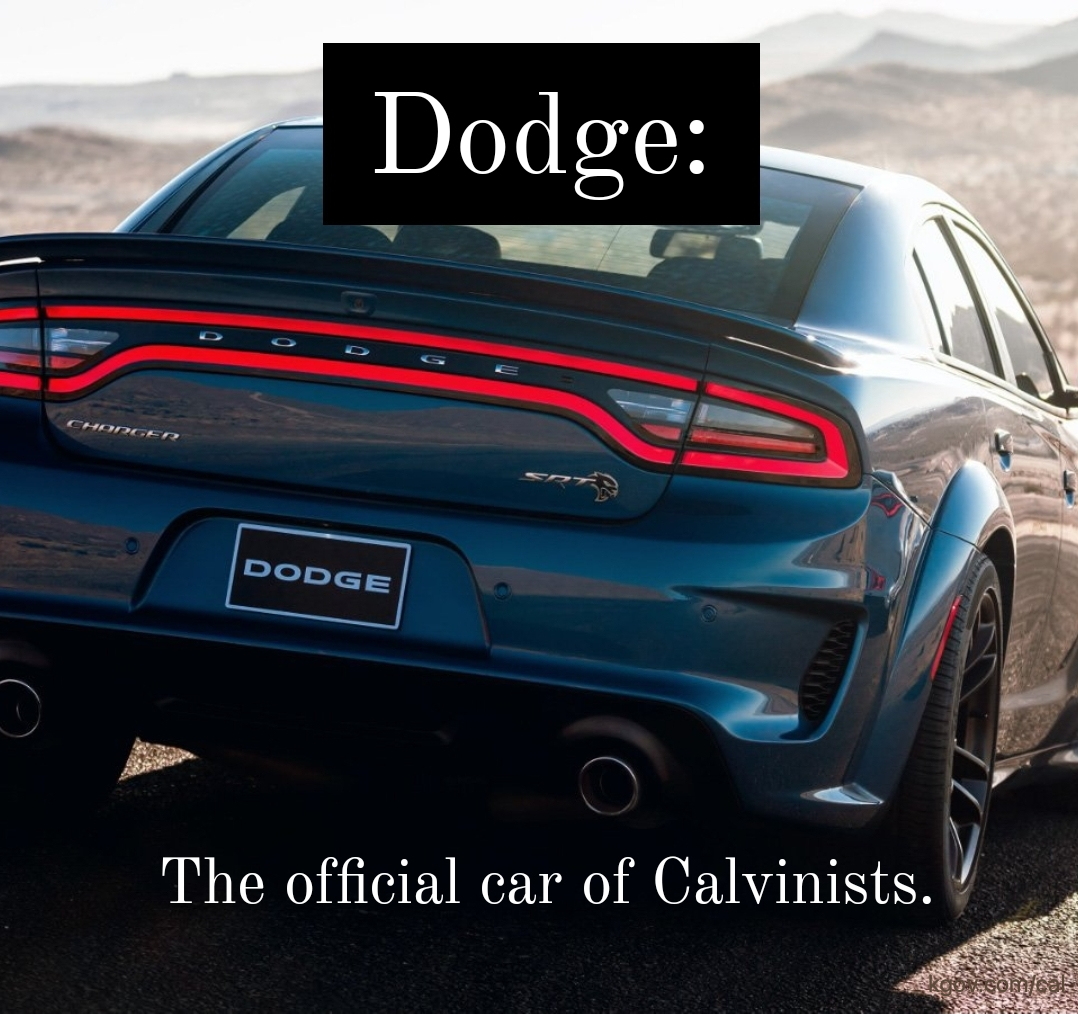 * And from chapter 16: "Hence we maintain that, by his providence, not heaven and earth and inanimate creatures only, but also the counsels and wills of men are so governed as to move exactly in the course which he has destined."

* It's Been Said: "If Calvinism is true, then love cannot exist. If love exists, then Calvinism cannot be true."

* Dom's Been Heard Sayin': "No theology makes less of man being made in God's likeness than Calvinism", Dominic Enyart once said to his dear-ole' dad. He's also pointed out that in the Scriptures God utterly abhors the person who brings another person to do evil. Yet this wickedness is what Calvinism pins on God. Not surprisingly then, Dodge is the official car of Calvinists in debate. Dom also observes, "One of the main reasons why Calvinists are legalists is because they argue that faith and works are the same thing. When a Calvinist denies that if you believe you will be saved by claiming that faith itself is a work, they are not only disagreeing with Scripture, they are contributing to legalism. They argue that by total depravity the unsaved cannot believe for salvation. They claim, rather, an elect person must first be regenerated in order to believe. Otherwise, they claim, absurdly, you are being saved by works, because if you need faith to be saved, then that is a work. However faith and works are not the same thing. So Christians should not be surprised that Calvinists, blurring the distinction between faith and works, tend to be legalists."

* Toy Refutes Calvinism: For those who have been told that everything occurs by God's eternal decree, thus making Him the author of every thought and word, consider the gibberish on a product imported from China. This toy, with its confused imprinted warning refutes Calvinism for all those who accept the Bible's teaching at 1 Corinthians 14:33 which states that, "God is not the author of confusion." The helicopter blade says, "WARNING: If blade damage, don't be fly, otherwise it will create the human body or blame damage." 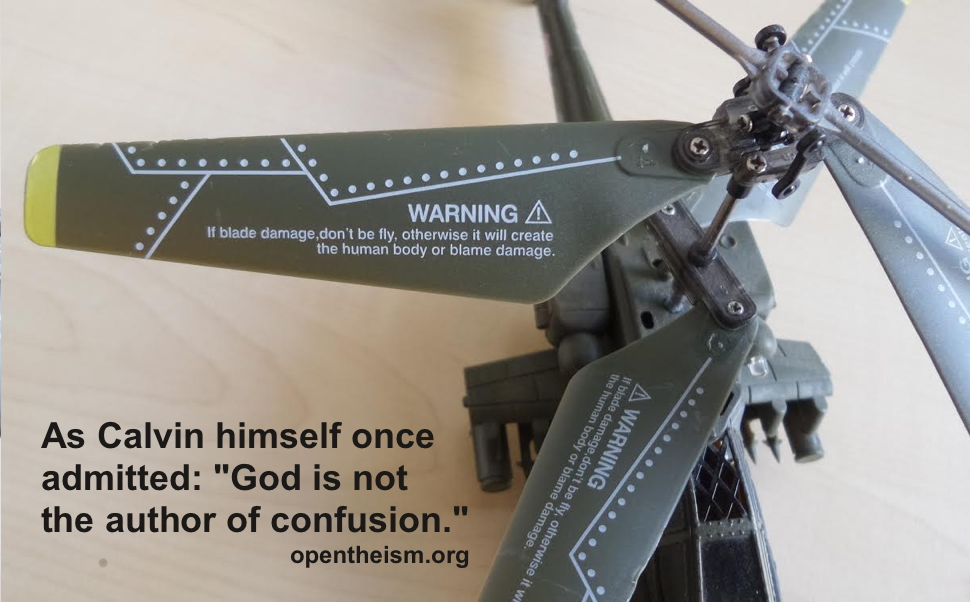 * Vegas Mass Shooting Today: Our hearts go out to all those suffering in Las Vegas. Today's program was pre-produced for the launch of the film Calvinist. Undoubtedly, because of his superstition masquerading as theology, the producer of Calvinist must have wondered why America's deadliest mass shooting was decreed to occur on the same day as his long-planned premiere. Update: Bob Enyart conducted an unauthorized, off-the-record interview with a Mandalay Bay employee who was there during the massacre to discuss the absurd conspiracy theorist claims like the FBI wiped the phones of the concertgoers (what, all 20 thousand of them?), that there were multiple shooters, that the government was somehow behind the mass murder, and even that concertgoers were being illegally held by FBI agents inside of the casino. See also, kgov.com/conspiracy-theorists (all of which, of course, was decreed in the mind of God from eternity past if the above craziness were true).