Bob Enyart, as the pastor of Denver Bible Church, along with pastor Joey Rhoads, of Brighton Colorado's Community Baptist Church, through their attorneys Rebecca Messall and Brad Bergford, have filed suit against the federal and state governments. If we here at BEL present this lawsuit in the vernacular using our typical talk-radio street-talk style, please don't hold that against our attorneys who have dotted every i and crossed every t. We've sued Steve Mnuchin, Secretary of the Treasury, Alex Azar, HHS Secretary, Chad Wolf, Homeland Security Secretary, and the vacant Office of the Governor, State of Colorado, and Jill Ryan, director of the Colorado Deparment of Health. DBC v. the Federal and Colorado Governments is case #1:20-cv-02362. 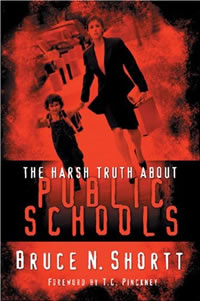 * Reason 1428 to Keep Your Kids Out of Public School: Bob begins and spends most of today's program discussing the public school teacher Matthew R. Kay. In tweets that he expected to remain private but which have become public, this Philadelphia English teacher strategized with other teachers on how to continue talking to students about gender and sexuality, equity and inclusion, trannies and homosexuals, without the "danger" of their parents, called "outsiders", overhearing. One tweeted, "Parents are dangerous" and another advised typing "secrets into the chat" to dialog with children so that the nosey parents can't overhear the discussion. Another warned that parents can "record" the Zoom classroom session and in fact one "white" parent had already done so and "filed a complaint". Ha! Hope it's as good as DBC's complaint! See also Bob's Harsh Truth Against Public Schools interview!

* Rapist Defendant Let Out of Jail Kills His Victim: A Virginia judge freed Ibrahm Bouaichi from jail out of concern he may catch the coronavirus and ordered him to stay at home. Police say he then killed the woman who accused him of raping her.

* Today's Tuesday, So Bob Sued the Government and Started a Petition: Just click on the screenshot to go to Change.org [Update: They have canceled our petition. See the details at kgov.com/dissed.] and consider signing Bob's petition...