* What's a Binding Site and How Long to Evolve a Change? Real Science Radio co-hosts Fred Williams and Bob Enyart describe a binding site, which is a place on a protein or even on a DNA or RNA strand, where other molecules can attach, somewhat like the shuttle docking to the space station. How many different binding sites exist in a human being? The current estimate of thousands may eventually be seen as too small by an order of magnitude. (And in all of nature there are more than a millions species with a myriad of different proteins and endless reams of DNA sequences, with countless binding sites scattered throughout.) According to an article at the National Institutes of Health, it would take 100 million years by a Darwinian process to change a single binding site in the human genome. Oops. Supposedly ALL OF UNIQUE HUMAN EVOLUTION from small Australopithecus chimp-like creatures to Homo sapiens has happened in only five million years. Then how could it take 100 million years just to change a binding site?

* This is yet another nail in Charles Darwin's coffin: that lies beneath Westminster Abbey. This 2008 NIH article abstract shows 100 million years to get a particular binding site change by mutation within humans, but only a few million years in fruit flies. And this great ID article by Douglas Axe exploits the NIH finding for human beings and for bugs. For example, when fruit flies are evolving a different binding site, this can happen in a few million years only if the intermediary stages are assumed to be 100% fit as compared to the original functioning binding site. But using the NIH methodology, if only a 5% reduction in fitness is presumed, fruit flies will take 400 million years to evolve a changed binding site. And of course, in 400 million years, Darwinists don't believe that only a single binding site has changed for a single bug, but that the entire evolution of all insects occurred. Yet there's another nail still...

* Information is Not Physical: Bob and Fred also offer their own two proofs that information is not physical...
- Bob: transmitting data via fiber optic cable at the speed of light, and
- Fred: weighing a flash drive again after deleting half the photos on it.
These two proofs demonstrate that Einstein was correct in that information is NOT physical. Also, this RSR show recalls that taking the arrangement of grains of sand on a beach and fully randomizing them (by letting kids play there for example) will not in any way prevent the beach from fulfilling its function as a beach, whereas fully randomizing the letters in an encyclopedia will destroy the encyclopedia's function. Many evolutionists refuse to acknowledge this simple statement of Shannon information theory because it is a threat to their blind faith that the extensive information required to form the first reproducing organism could not assemble by random chance.

* Einstein's Gulf: Regarding that extraordinary "gulf" between matter and information, as Bob previously posted on TOL in A Christian Answer to Euthyphro's Dilemma:

…while matter can be arranged to represent data, data itself [information, etc.] is not material. In 1936 Einstein famously wrote, "the most incomprehensible thing about the world is that it is comprehensible". And in 1944 (remarking about Russell) he described the ability to get from matter to ideas as a "gulf–logically unbridgeable," which some scientists and linguists refer to as Einstein's Gulf… [See more at rsr.org/math.]

Then, how about matter itself? Separately, there still remains the very difficult question, "What is matter?" What if it turns out that matter is not physical? Some suspect matter is information based, such that matter itself may not even be made of matter. If so of course then, materialism is deader than a doorknob. But that wouldn't even give most of them pause. They'd just become godless spiritualists. Consider though how leading physicsts have wrestled with the fundamental nature of matter, and even whether it might be information based. Renowned physicist John Wheeler (1911-2008), a strong advocate of information theory, coined the terms "black hole" and "wormhole", collaborated with Einstein and Bohr, and advised graduate studnets Everett, Thorne, and Feynman. Wheeler described his career, and hence, his growing understanding of the universe, in three stages. First, "Everything is Particles." Second, "Everything is Fields." And finally, "Everything is Information." (To illustrate the uncertainty, see CIT's Sebens over at Aeon explains the raging uncertainty about whether electrons, etc., are actually particles or fields.) And over at BigThink in a 2017 article, The basis of the universe may not be energy or matter but information, they quote Wheeler's 1989 paper for the Santa Fe Institute:

"every it--every particle, every field of force, even the space-time continuum itself--derives its function, its meaning, its very existence entirely--even if in some contexts indirectly--from the apparatus-elicited answers to yes-or-no questions, binary choices, bits."

And Philip Perry at BigThink continues:

There are lots of theories on what are the basis of the universe is. Some physicists say its subatomic particles. Others believe its energy or even space-time. One of the more radical theories suggests that information is the most basic element of the cosmos. Although this line of thinking emanates from the mid-20th century, it seems to be enjoying a bit of a Renaissance among a sliver of prominent scientists today...

If the nature of reality is in fact reducible to information itself, that implies a conscious mind on the receiving end, to interpret and comprehend it.

There is much in quantum mechanics that supports that. And the scientific origin even of the (absurd) multiverse/many-worlds belief was exactly an effort to avoid the implied requirement of consciousness which appears to many brilliant minds to be at the heart of physics. (See rsr.org/mutliverse#princeton.) Of course though in his article, like in that excerpt, Perry skips the conscious Mind that would first be on the transmiting end.

IBM's Phil Tetlow, writing of MIT, CIT, CMU's Edward Fredkin, sometimes Feynman collaborator, someimes physics professor, quotes him saying, "I've come to the conclusion tha the most concrete thing in the world is information" and as Wired puts it, Fredkin insisted that "everything we see and feel is information."

Tim Malden's 2019 text on Quantum Theory published by Princeton discusses "quantum information theory" in which physical changes in a system can occur based on "what someone believes about the system." On the first page of his book he asks, "What is matter?" Malden answers his own question, "The best theory of matter presently available is quantum theory. Our main task is to understand just what quantum theory claims [yet] no consensus at all exists among physicists about how to understand quantum theory... Instead, there is raging controversy." Perhaps then science will finally arrive at the New Testament teaching in Hebrews 11:3 that "the things which are seen were not made of things which are visible" for "In the beginning was the Word, and... all things were made through Him" John 1:1-3. After all, God didn't generate, but He "said, 'Let there be light.'"

* No Symbolism in the Laws of Physics: Regardless of how broad and deep mankind develops its understanding of physics and information, it will never discover a symbolic logic function in the classical laws of physics. Information is not physical, and hence, strictly material systems cannot give rise to information systems.

* Not a Single Journal Paper EVER: Here is another way of stating this: Not a single journal paper has ever proposed even a vague theoretical method of how a scheme of biological information could have arisen by material processes. Such a scheme minimally includes three parts: 1) a protein or other life-enabling device 2) an information molecule containing the instructions for building that protein, and 3) a mechanism that implements the instructions. Materialists cannot answer this question because it is unanswerable. Consider the inventor of ASCII who arbitrarily assigned the letter "A" to the number 65, and explained that the system should render an "A" whenever it encounters the value 65. A scheme is not a physical system and thus cannot arise by materialistic means. Atheists have been unwilling to appreciate this fundamental reality because it is an enormous threat to their belief system. (See this in our Pepperdine video just below.) 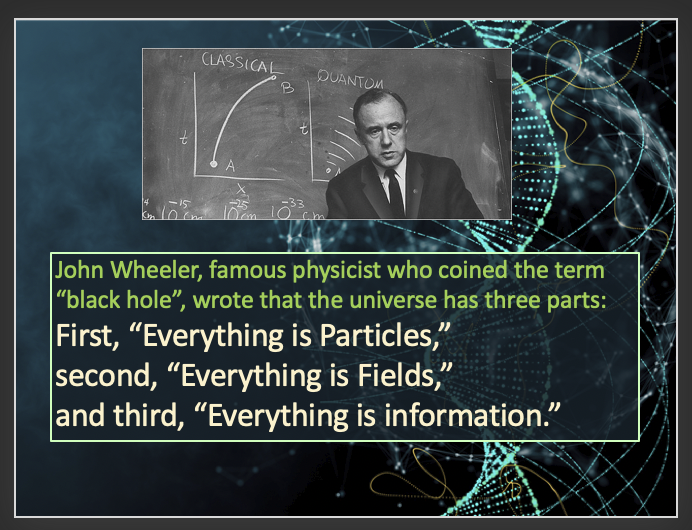 * Trading Genesis: No Atheistic Theory of Origins Even Exists. Atheists say that God doesn't exist, but what actually doesn't exist is an atheistic theory of origins. See Bob Enyart detail this in his talk in Malibu on the Pepperdine University campus:

Today’s Resource: Get a science DVD, book, or written, audio or video debate from us and this will help BEL continue to reach people with our Real Science Radio broadcasts! Have you browsed through our Science Department in the KGOV Store? Check out especially Walt Brown’s In the Beginning and Bob’s interviews with this great scientist in Walt Brown Week! You’ll also love Dr. Guillermo Gonzalez’ Privileged Planet (clip), and Illustra Media’s Unlocking the Mystery of Life (clip)! You can consider our BEL Science Pack; Bob Enyart’s Age of the Earth Debate; Bob's debate about Junk DNA with famous evolutionist Dr. Eugenie Scott; and the superb kids' radio programming, Jonathan Park: The Adventure Begins! And Bob strongly recommends that you subscribe to CMI’s tremendous Creation magazine and Ken Ham's Answers magazine!  Or to order call BEL at 1-800-8Enyart.