Sept. 2020 Update: It's too late to pray for Ruth Bader Ginsburg. See below for Donald's Trumps list of 44 possible judicial nominees (current 20 and previous 24). And see our Three Lessons of Trump. First however, consider these Trump bullets from Bob Enyart Live where we are hardcore anti-leftist, anti-Democrat, fundamentalist law-and-order Christians. Through 2020...

- Trump has put 300 legal-positivist judges on the federal judiciary for life with strong evidence that they all agree with the central holding of Roe v. Wade that the unborn child does not have a right to life (including Gorsuch, Kavanaugh, Barrett, Scalia, Roberts, Thomas, etc., almost guaranteeing another generation of American genocide as explained, for those not observing carefully, at kgov.com/republican-judicial-crisis.

- Trump has every single Republican Senator bragging about their (socialist, immoral) support for mandating health coverage for "preexisting conditions" (not unlike forcing Allstate to give insurance to drivers after they've crashed and Prudential to insure the lives of dead people) as he has cemented conservative Republican support for a dozen of America's socialist programs as listed atop kgov.com/socialism.

- Trump has given de facto permission to all politicians to open cuss which further coarsening of America's culture is apparently exactly what we needed as the Democrats have taken that permission to new lows of vulgar public discourse.

- Trump has turned the White House into a glass house as his previous lifestyle has caused virtually all conservatives to pull their punches and self-censor the public outcry against Biden, et al., for apparent sexual assault of women.

-  Trump has cemented the full embrace of homosexuality by conservative and even Christian leaders, even though homosexuality is far more destructive to the family, the church, and America, than Islamic terrorism.

- Trump, by failing to apologize and repent before God for his blatant, and even bragged about, sexual immorality, provides a destructive role model for millions of Americans, and especially our youth. If the cost of beating the Democrats is dishonoring God the loss is far greater than what Kamala Harris can do to us. To paraphrase the Bible, "Don't fear her, Fear Him!" We don't need a religious test for office, because instead of improving government that destroys the church. But someone who promises to support the killing of the innocent (see the last bullet) has disqualified himself, regardless of the consequences.

- Trump funding the abortion industry for almost three years, without even a fight and at Barack-Obama levels, i.e., a billion dollars to child killers, all the while fighting a fierce funding battle for the "wall", which would have been heroic if at the same time by his own signature a dozen times over he hadn't given fungible resources to Planned Parenthood which they used to kill many, many children. (If you advocate defunding Auschwitz, step one is, don't first give them a billion dollars.)

- Trump, worst of all, is openly pro-choice, state-by-state, embracing and legitimizing the killing of unborn children in any state that decides, that is, passes laws, that indicate they want to kill the innocent. This is no different than a state in the south deciding that by the color of their skin black human beings could be property, or a state in Germany deciding to gas Jews. Being pro-choice if the woman decides, or by father's rights being pro-choice if he decides also, is essentially equivalent with only technical differences to president Trump's position of, "Let the states decide." This means that millions of children have been killed and will be killed, not under objection from Donald Trump but by his own policies and with his support. Your murderer is never better than their murderer. Please pray for his eternal soul.

Etc. as at our prolifeprofiles.com/trump and on the rest of this page here at kgov.com/trump.

* Ginsburg Replacement Post-show Update: (from kgov.com/republican-judicial-crisis) After the death of Ruth Bader Ginsburg, anti-abortion abolitionists noted that even with the confirmation of an anti-Roe replacement jurist: "Supreme court history informs us that Roe’s reversal would still be unlikely. In 1992, the US supreme court was made up of eight Republican nominees, including three from Reagan and two from Bush. The lone Democrat nominee on the court was Justice Byron White who dissented in Roe v. Wade. So there were eight Republicans and a pro-life Democrat. The Planned Parenthood v. Casey (1992) decision should have been a slam-dunk overturning of Roe. Yet even the ’92 court upheld legal abortion. The majority was made up entirely of Republican nominees." See also AmericanRTL.org/dred.


[Sept. 3, 2020 Pennsylvania Rally] If you love Donald Trump, please pray for his soul. And please consider that it is possible for well-meaning Christians to use a man to defeat their political enemies, and in the process destroy that man's soul by giving him a false sense of security that he does not need forgiveness from Christ and that he does not need to be concerned about salvation, judgment day, or hell. Trump is certainly no expert in the Gospel. (See him practically admit as much in the brief video just below.) And with your greater knowledge, wouldn't even you expect that a "great Christian leader" to be, at the very least, a Christian himself? Well, Christians have led President Trump to wrongly believe exactly that about himself. 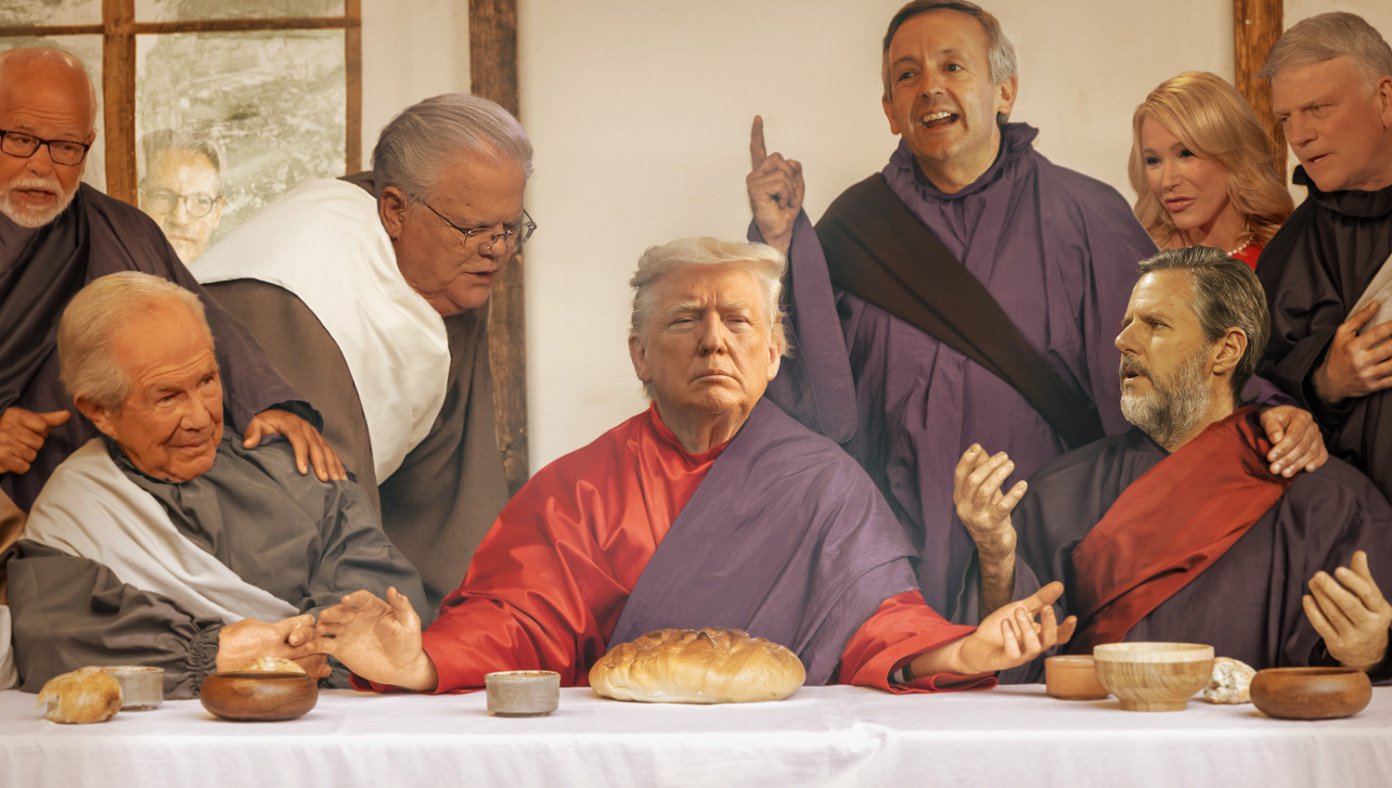 The Babylon Bee: has addressed Trump repeatedly for concerns like these... 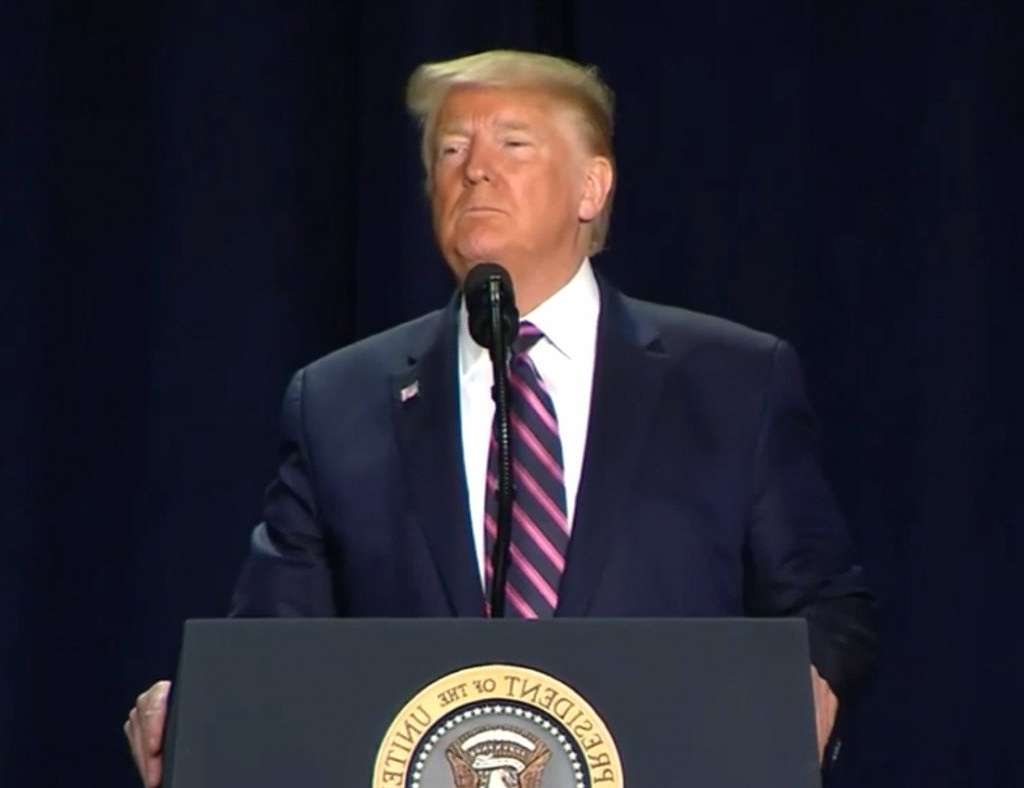 Feb. 6, 2020 Trump Irritated As Some Jesus Guy Hogs All The Attention At Prayer Breakfast

Jan. 20, 2020 First Baptist Dallas Passes Out 'What Would Trump Do?' Bracelets

Sept. 27, 2019 Evangelical Leaders Ask Trump Which One Of Them Will Betray Him During Impeachment Proceedings

* Lesson One from Trump: Discussed last week on BEL, the first lesson of the Trump nomination is that moral relativism cannot be controlled. The establishment "pro-life" groups like National Right To Life and Focus on the Family taught Christians to support politicians who advocated the killing of unborbn children. Today Christians couldn't care less if a politician lies to them, as long as they think they can use that politician to defeat their political opponents, even if their own candidate is unrepentant about his own sexual immorality, an advocate of many socialist programs, or even a supporter of killing unborn children.

2020 Trump Abortion Update: Donald Trump by his own signature gave $1.4 billion dollars to the abortion chain Planned Parenthood (and that was without fighting funding like he did for the wall). President Trump placed 300 judges on the federal judiciary without asking even one of them if they were against killing unborn children (and he put Gorsuch and Kavanaugh on the Supreme Court even though both agree with the central holding of Roe v. Wade that the unborn child is not a person. See this most clearly regarding Gorsuch.)

2020 Trump Sexual Immorality Update: Homosexuality is more dangerous to the individual, the family, the church, and the nation than is the true horror of widespread Islamic terror. However Donald Trump has been homosexualizing Christians and getting the most politically active of them to stand and cheer for homosexual pride as he made the Republican National Convention proud of (R) homosexuals. Trump uses homosexuals to increase his political power just as Christians use him to increase theirs. As president, Trump became the first to appoint a homosexual to a Cabinet-level position (and later, Jay Sekulow hired that official, Ric Grenell, to work at the ACLJ "Christian Advocates"). President Trump was not satisfied with promoting perversion only at home. "As we celebrate LGBT pride month... My administration has launched a global campaign to decriminalize homosexuality..." Retweeting with "My great honor!!!", Donald Trump helped the homosexual Log Cabin Republicans group's video tweet reach six million views, as it begins in a lispy voice, "Donald Trump is the most pro-gay president in American history." And as president he's remaking the courts alright for example by putting on the 9th Circuit a "married" homosexual. And Trump's reality TV show donated to some of the most perverse of the homosexual activist groups including the Gay Men's Health Crisis and GLSEN, which has a president who promotes pedophiles, promotes the most vile sex acts to middle school students, and homosexual viewpoint "staturation" should occur in kindergarten.

2020 Trump Socialism Update: Like all Republican presidents before him, on domestic entitlements Donald Trump has outspent the Democratic administration that preceded him. The Democrats practically admit that they advocate only that which is evil, but that gives Christians no excuse to lie about our own party. When Donald Trump says, "As long as I am president, America will never become a socialist nation", he's missing that it already is a socialist nation, and we're socialist by his own policies and the socialist programs he's proud to "save". For today, a conservative is a Republican trying to save a social program started by a liberal. Here's an exercise. List in 2020 America's existing socialist policies and programs:

- The Republican/Romney/Trump pre-existing conditions health coverage
- Our welfare program that 3.5 million people are on
- Medicaid with 65 million people on that for health care
- CHIP which is even more Medicaid for 6 million minors
- Food stamps for more than 40 million people
- Supplemental Security money to 8 million disabled and elderly
- Earned Income Tax Credit which as a tax reduction isn't quite as bad except that a quarter of its payments are made in error
- Housing assistance for 1.2 million apartments
- Unemployment insurance which government has no business mandating
- Medicare, unlike Medicaid for people with less money, Medicare is for everyone else
- Social Security, like Medicare, is for almost everyone, so that everybody can pay for everybody with the government taking its share as the middleman.
- Etc., etc., etc. [Please email additions to Bob@kgov.com. It's sad of course. But... thanks!]

* Lesson Two from Trump: The second lesson of the Trump's nomination is that it is further exposing the Christian leaders who always pretended that they would never support an evil candidate. As a general rule, politically, they often support evil and oppose what is right.

* Lesson Three from Trump: Christians voting for Trump know something that they don't realize that they know. Christian Trump supporters understand the fear that drove German Lutherans to support national socialism: fear of economic collapse, fear of a failed foreign policy, fear of a loss of national identity, etc. But perfect love casts out fear. We should make decisions out of obedience to God and not fear of the enemy.

* Trump Donates to Most Vile of Homosexual Groups: Please ignore the Trump puff pieces from the morally comprised LifeNews.com, and instead see LifeSiteNews's horrific report, Trump donated to group that promotes homosexuality to 5-year-olds, ******* in middle school.

* For the First Monday that Donald Trump Woke Up in the White House: See the full-page open letter in the Washington Times written by Bob Enyart for Colorado Right To Life to urge the new Trump administration to do what is right, by the most innocent among us. Just click to see IF THERE IS NO GOD, President Trump in the context of the full edition of the Times or for just the letter itself, click on this tear sheet header:

It's now too late to pray for Ruth Bader Ginsburg.
Instead, pray about the national eruption
that replacing her will create.
And pray too that Donald Trump changes
his nomination approach
and for the first time asks candidates
whether they will uphold the
unborn child's right to life.