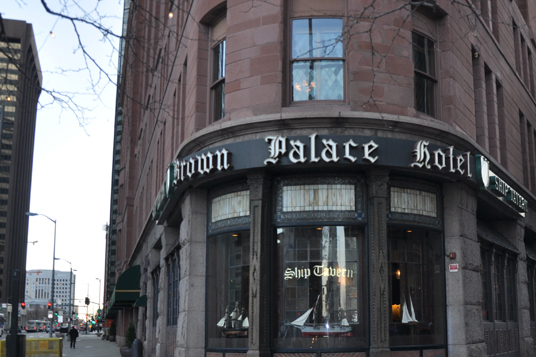 * July 8th Open Theism Enyart/White Debate: Well-known theologian James White will debate Bob Enyart, the pastor of Denver Bible Church on Open Theism: Is the future settled or open? On Tuesday evening, July 8 at 6:30 p.m., the debate will be held downtown Denver at Colorado's historic Brown Palace hotel. If you're in the state, or can be, you are cordially invited to come on out and we'll have a great time in the Lord! Admission is free and seats for 100 attendees are available on a first-come, first-served basis. Quoting OpenTheism.org, "Open Theism is the Christian doctrine that the future is not settled but open because God is alive, eternally free, and inexhaustibly creative." That is, God can forever think new thoughts, design new works, write new songs. He has not exhausted His creativity and never will for. Of His kingdom there will be no end and thus by God's everlasting freedom and abilities, the future cannot be settled but must be open. In the meantime, check out Bob's previous efforts by clicking on the "Debate" tab at OpenTheism.org.

Today's Resource: Have you seen the Government Department at our KGOV Store? You just might love Bob Enyart's classic God's Criminal Justice System seminar and his audience favorite DVDs: God and the Death Penalty, Live from Las Vegas, and Bob on Drugs. We also carry Bruce Shortt's vitally-important book, The Harsh Truth about Public Schools and we think that you will forever thank us (literally) if you get our powerhouse Focus on the Strategy trilogy!

* Bill Wasn't the First Man that Hillary Helped Get Away with Rape: 2014 Update: Alana Goodman of the Washington Free Beacon reports:

Newly discovered audio recordings of Hillary Clinton from the early 1980s include the former first lady’s frank and detailed assessment of the most significant criminal case of her legal career: defending a man accused of raping a 12-year-old girl.

In 1975, the same year she married Bill, Hillary Clinton agreed to serve as the court-appointed attorney for Thomas Alfred Taylor, a 41-year-old accused of raping the child after luring her into a car. The recordings, which date from 1983-1987 and have never before been reported, include Clinton’s suggestion that she knew Taylor was guilty at the time. She says she used a legal technicality to plead her client, who faced 30 years to life in prison, down to a lesser charge. The recording and transcript, along with court documents pertaining to the case, are embedded below.

The full story of the Taylor defense calls into question Clinton’s narrative of her early years as a devoted women and children’s advocate in Arkansas—a narrative the 2016 presidential frontrunner continues to promote on her current book tour.

Her comments on the rape trial are part of more than five hours of unpublished interviews conducted by Arkansas reporter Roy Reed with then-Arkansas Gov. Bill Clinton and his wife in the mid-1980s.

The interviews, archived at the University of Arkansas in Fayetteville, were intended for an Esquire magazine profile that was never published, and offer a rare personal glimpse of the couple during a pivotal moment in their political careers.

* Alana Goodman, the reporter above, is not Ilana Goldman: A caller thought that he recognized the Washington Free Beacon reporter's name, Alana Goodman, as someone Bob had debated a while back, Ilana Goldman, named by the Washingtonian Magazine as one of Eight Women to Watch. And we agree, like with Hillary, and everyone who supports the dismemberment of unborn children, you have to watch them... carefully: