A Long Time Ago, In a Galaxy Too Far Away 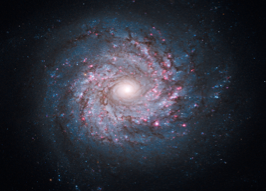 * Galaxy Too Far Away To See Claimed Star Births: The so-called "supermom galaxy" that allegedly gives birth to 700 stars per Earth year is five billion light years away, far too distant to see a star, let alone a star being formed. The observations are agreed to by creationists and evolutionists. The public is misled however, to believe that the naturalistic  interpretations of the evolutionists are actually the observations themselves, or at least that they are as objective and certain as the observations. However, according to John Maddox, physicist and 23-year editor of the journal Nature, scientists don't even know, "which objects came first, stars or galaxies?" Thus, like PZ Myers, Richard Dawkins, and all the Darwin Marketing Reps, evolutionary astronomers oversell the public on their confidence gaffle.

For today's show RSR recommends
What You Aren't Being Told About Astronomy:
Our Created Solar System!

* Noah's Ark Hollywood Blockbuster Coming Soon: Starring Russell Crowe as Noah, a major Hollywood production house is making a $130-million movie about the global flood of Genesis. Related: Regarding Noah's Arks, Ken Ham's Answers in Genesis organization is building a full-scale Noah's Ark in Kentucky, which will be one of the extraordinary memorial arks built! For as God often says, "Remember." UPDATE: As of May 2015, Crowe's Noah has lost $40 million as documented at rsr.org/noah-box-office.

* How Many Animals Were On The Ark: Check out Marcus Ross' great article, No Kind Left Behind, presents the taxonomic reasoning that suggests that Noah and his family would have had to care for 2,000 land-dwelling vertebrates on the ark. Then, regarding how quickly these animals could diversify and migrate, see http://rsr.org/baraminology, http://answersingenesis.org/media/video/am/v5-n3/rapid-speciation, and http://creation.com/Flood-biogeography.

* Update: Dinosaur Species Went on Diet, 500 Even Disappeared: As reported previously on RSR, an analysis of "more than 1,000 named dinosaurs [reduced the actual number] to 500 or so," said University of Bristol paleontologist Michael Benton. Further, as reported in the journal Biology Letters in October 2012, paleontologist also greatly overestimated the weight of dinosaurs. Instead of Brachiosaurus weighing 80 tons, for example, it is now carefully calculated that it would have weighed about 23 tons. So reducing the numbers and weight of dinosaur kinds also reduces the number of animals that we calculate needed to be on the ark. See also famed paleontologist Jack Horner, who we at RSR offered a grant of $23,000 to carbon date one of his soft-tissue T. rex bones:

Today’s Resource: Getting a science DVD, debate, or book from us will help keep our science program on the air! Have you browsed through our Science Department in the KGOV Store? Check out especially Walt Brown’s In the Beginning and Bob’s interviews with this great scientist in Walt Brown Week! You’ll also love Dr. Guillermo Gonzalez’ Privileged Planet (clip), and Illustra Media’s Unlocking the Mystery of Life (clip)! You can consider our BEL Science Pack; Bob Enyart’s Age of the Earth Debate; Bob's debate about Junk DNA with famous evolutionist Dr. Eugenie Scott; and the superb kids' radio programming, Jonathan Park: The Adventure Begins! And Bob strongly recommends that you subscribe to CMI’s tremendous Creation magazine and Ken Ham's Answers magazine!  Or to order call BEL at 1-800-8Enyart.