The Trouble with Chalk (for evolutionists)

* What Do the Big Bang, Chalk, Whales, Bacteria, & Fish Have in Common? RSR co-hosts Bob Enyart and Fred Williams discuss the latest issue of Creation magazine that raises questions about fascinating scientific matters. 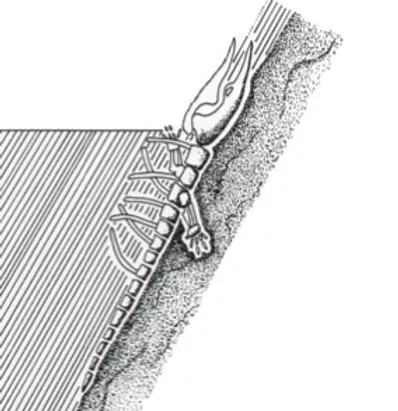 * Chalk, of all things, Thwarting Evidence for an Old Earth: Out with the old; in with the new! Not only do satellite images demonstrate how chalk formations can be deposited rapidly, but chalk-like diatomaceous earth buried a whale in many, many layers of allegedly super-slowly deposited diatoms. Discovery of an 80-foot long fossilized baleen whale in a diatomite layer at the Miguelito Mine in Lompoc, California, indicates rapid diatomite deposition, as documented in a paper by Dr. Andrew Snelling and presented at youngearth.com. If this diatomite was deposited gradually, as claimed by uniformitarian-biased old-earth geologists, the diatomite would not be pure, as it is. (Similarly, the extraordinary purity of some limestone deposits should be sufficient to falsify claims of million-year depositions.) And most significantly for this creature, a slow deposition rate would result in corrosion and scavenging of the whale's bones, because the rib cage, for example, would have been awaiting burial for tens of thousands of years. Rather, this whale was buried rapidly in diatomite along with fish, sea lions, birds, and other whales.

* Chemical and Engineering News & YoungEarth.com: This important find was also reported in Chemical and Engineering News, Vol. 54, 1976 by Kenneth M. Reese in “Workers Find Whale in Diatomaceous Earth Quarry.” Lawrence G. Barnes of the Natural History Museum of Los Angeles County reported that he also saw other whales along with a small seal, fish, and birds in that quarry which is 238–530 feet above sea level and at 34°37'30.40"N, 120°29'01.79"W. See this also at YoungEarth.com!

* Amazing Ten Commandments Research at the University of California: be amazed!

* Fish Swarm Brilliantly, Like Birds & Bees: The researchers say that what fish do is similar to how highway drivers navigate, however, bees, birds, and fish do this not in simple two dimensions as on the plane of a highway, but in a three-dimensional 360-degree space.

For today's show RSR recommends
What You Aren't Being ToldAbout Astronomy:
Our Created Solar System!

Today’s Resources: Get the Spike Psarris DVD What You Aren't Being Told About Astronomy and Vol. II, Our Created Stars and Galaxies! Have you browsed through our Science Department in the KGOV Store? You'll love it!

"We think [National Public Radio's] Ira Flatow is a little bit jealous," Enyart said. "For example, when people want to find out the latest science — like finds of dinosaur soft tissue — they come to 'Real Science [Radio].' We beat out a lot of science sites."

A Google search of: dinosaur soft tissue, highly ranks Enyart's site as #3 out of thousands; well ahead of National Geographic's and NPR. Searching for: big bang predictions, ranks Real Science [Radio] as #1 out of a million, similar to the very high rankings for searches like: evidence against the big bang; young earth; and scholars doubting darwin! [And don't forget to: rememberthenautiloids.com!]

* Earlier Update from Nov. 30, 2012: As reported by the NY Post in their article, Science radio showdown, and with more detail by the Denver Post, National Public Radio host Ira Flatow of their Science Friday program filed suit in the State of New York against Bob Enyart over the name of our weekly program, Real Science Friday. This week our attorney filed papers in a Manhattan court and successfully moved the case out of state court and into federal court, which is a more natural venue for our free speech defense. We'll keep you informed! And meanwhile, check out, from a well-known evolutionist, Jerry Coyne's scientific criticism of RSR (and our rebuttal). University of Chicago Professor Coyne's scientific allegation against RSR has already been refuted, not by research done here at Real Science Radio, but by published work from cutting-edge evolutionary geneticists at some of the world's leading institutions. Jan. 2013 Update: The Denver Post reports that the NPR radio program settled its lawsuit with Bob Enyart's Real Science Radio program.