Trump just said 'Start a Petition' on the Russia Pulitzer

* So we did! Ha! 8/14/20 Update: The Cancel Culture got to our petition. Change.org took down our Russia Pulitizer petition because "it violated our Community Guidelines."  Right. By telling the truth (Gal. 4:16). See this now on BEL's List of When We've Been Dissed! 8/18 Update: Here's a knockoff petition! 8/20 Update: Now they squashed even the knockoff petition. Sheesh! 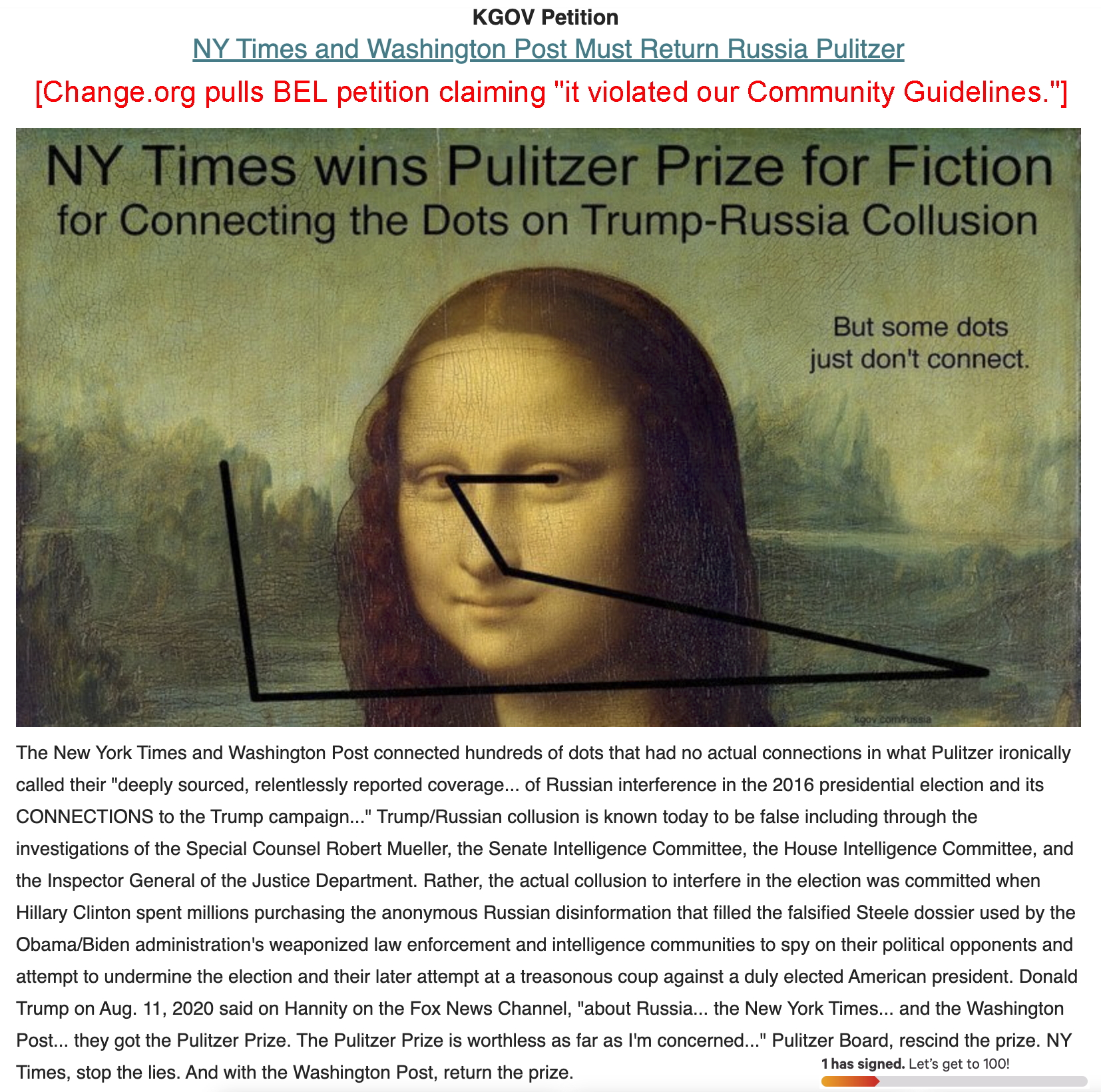 The New York Times and Washington Post connected hundreds of dots that had no actual connections in what Pulitzer ironically called their "deeply sourced, relentlessly reported coverage... of Russian interference in the 2016 presidential election and its CONNECTIONS to the Trump campaign..." Trump/Russian collusion is known today to be false including through the investigations of the Special Counsel Robert Mueller, the Senate Intelligence Committee, the House Intelligence Committee, and the Inspector General of the Justice Department. Rather, the actual collusion to interfere in the election was committed when Hillary Clinton spent millions purchasing the anonymous Russian disinformation that filled the falsified Steele dossier used by the Obama/Biden administration's weaponized law enforcement and intelligence communities to spy on their political opponents and attempt to undermine the election and their later attempt at a treasonous coup against a duly elected American president. Donald Trump on Aug. 11, 2020 said on Hannity on the Fox News Channel, "about Russia... the New York Times... and the Washington Post... they got the Pulitzer Prize. The Pulitzer Prize is worthless as far as I'm concerned..." Pulitzer Board, rescind the prize. NY Times, stop the lies. And with the Washington Post, return the prize.

* Also on today's program: We discussed Obama's Safe School's Czar, our lawsuit announced on yesterday's program Bob Sues the Government, our brief email reply to a leftist anti-Trumper who's been trolling Bob, and Bob's reply to leftist listener who wrote in that Christians should all believe the earth is flat because the Bible says it's flat.

* Obama's Safe School's director and GLSEN founder Kevin Jennings who promotes pedophiles through his praise of pedophilia advocate  Harry Hay who worked with NAMBLA (the North American Man/Boy Love Association dedicated to repeal age of consent laws and end the "opression of men and boys in consensual relationships"), who thanks the 25-year-old man who raped him when he was 14, and who wished that experience on other boys, sometimes saying, "13, 14, 15-year old kids [who] would be welcoming this", and at other times, lowering that age, as he did speaking publicly in San Francisco in a forum titled, Man/Boy Love and Sexual Liberation, "I think that the 12-year-old, 13-year-old boy approaching puberty knows [what] he needs... and he wants very much to reach out and find someone who will give this to him." Pervert freak. And Jennings is just as bad for honoring Hay, and Obama is worse for absurdly giving Jennings a "safe schools" appointment. (Find this at kgov.com/pedophiles, kgov.com/homos, and kgov.com/superfluous.)

* On Marriagable Age: Ancient humans matured much more slowly than do modern generations and so the marriagiable age would have most naturally been connected to reaching puberty. One of the consequences of living in a world in rebellion against God is that today's more rapid maturation makes it easier for cultures to systematically take advantage of young girls. Incidentally, in about 318 A.D. in Egypt, Athanasius of Alexandria wrote about "virginity", that Christ's influence "has so prevailed with His teaching on this subject that even children not yet of lawful age promise that virginity which transcends the law."

If the Bible actually taught a flat Earth, and especially prior to Copernican heliocentrism, one would expect the church to have taught the flat Earth. But the Bible doesn't, and the church never has. Against the truth, millions of atheists, etc., continue to allege that the church has historically taught a flat earth either because those materialists are uneducated or because they are willing to make false accusations. See the links at rsr.org/flat-earth#prof for University of California history professor Dr. Jeffrey Russell's writings Inventing the Flat Earth and The Myth of the Flat Earth. Today though, combining the negative effects of social media with the low-quality science education of our public schools, and we have a global phenomenon whereby, as per above, 10% of the population of France (a secular society) is unsure about a spherical Earth, and remember, according to LiveScience the president of the Flat Earth Society Daniel Shenton is a Darwinist. (Find this at rsr.org/flat-earth.)

* Bob Sues the Government: Bob Enyart, as the pastor of Denver Bible Church, along with pastor Joey Rhoads, of Brighton Colorado's Community Baptist Church, through their attorneys Rebecca Messall and Brad Bergford, have filed suit against the federal and state governments. If we here at BEL present this lawsuit in the vernacular using our typical talk-radio street-talk style, please don't hold that against our attorneys who have dotted every i and crossed every t. We've sued Steve Mnuchin, Secretary of the Treasury, Alex Azar, HHS Secretary, Chad Wolf, Homeland Security Secretary, and the vacant Office of the Governor, State of Colorado, and Jill Ryan, director of the Colorado Deparment of Health. DBC v. the Federal and Colorado Governments is case #1:20-cv-02362.

* And For No Other Reason Than: For no other reason than Boethius (c. 480–524) was mentioned above (and in some of our God and time programs) I decided to note here his use of the pagan Wheel of Fortune, or Rota Fortunae in his confused, contradictory, and unfortunate (pun intended) settled-view theology:

I know the manifold deceits of that monstrous lady, Fortune; in particular, her fawning friendship with those whom she intends to cheat, until the moment when she unexpectedly abandons them, and leaves them reeling in agony beyond endurance. ... Having entrusted yourself to Fortune's dominion, you must conform to your mistress's ways. What, are you trying to halt the motion of her whirling wheel? Dimmest of fools that you are, you must realize that if the wheel stops turning, it ceases to be the course of chance." [primary source pending]