* Fifth Program in Our Continuing Series: For this fifth program in our continuing series, RSR's List of Answers to Hydroplate Theory Objections (see rsr.org/answers), Bob Enyart interviews Kevin Lea, formerly with the Puget Sound Naval Shipyard’s nuclear engineering department. Enyart and Lea discuss the "Geometry Problem", an out-dated but lingering criticism of Dr. Walt Brown's work. For estimating the pre-flood thickness of our planet's crust, decades ago Dr. Brown used the amount of material in the Earth's sedimentary layers to arrive at a starting estimate of 10 kilometers thick. Afterward, when evidence dictated that even more debris had been ejected by the fountains of the great deep, Brown increased the estimate to 10 miles. Finally, in the last few years, with far more "flood debris" located, the theory's estimate for the thickness of the crust as initially created now stands at 60 miles!

Geophysicist John Baumgardner's quarter-century-old criticism that a 10-mile thick crust cannot account for today's known thickness, a valid objection at the time, is no longer relevant. In 2012 Dr. Baumgardner wrote regarding the HPT's need "to increase crustal thickness of the continents by the factor of two... there is the geometry problem of not having enough crustal mass between the present continent and the adjacent ridge to achieve such a doubling of thickness..." Concluding today's Real Science Radio broadcast, Enyart and Lea discuss the evidence that required increasing the estimated thickness of the created crust! (For more information, see rsr.org/albright, rsr.org/hpt, and next week's conclusion to today's interview titled, "Kevin Lea Answers the 'Pacific Crust' Hydroplate Objection.")

All the objects beyond 150 astronomical units come closest to the sun, a point known as perihelion, at nearly the same time that they cross the plane of the solar system. There’s no reason for these perihelia to bunch up like that. Billions of years of evolution should have left the perihelia scattered, like the rest of the Kuiper Belt—unless something was holding the perihelia in place. 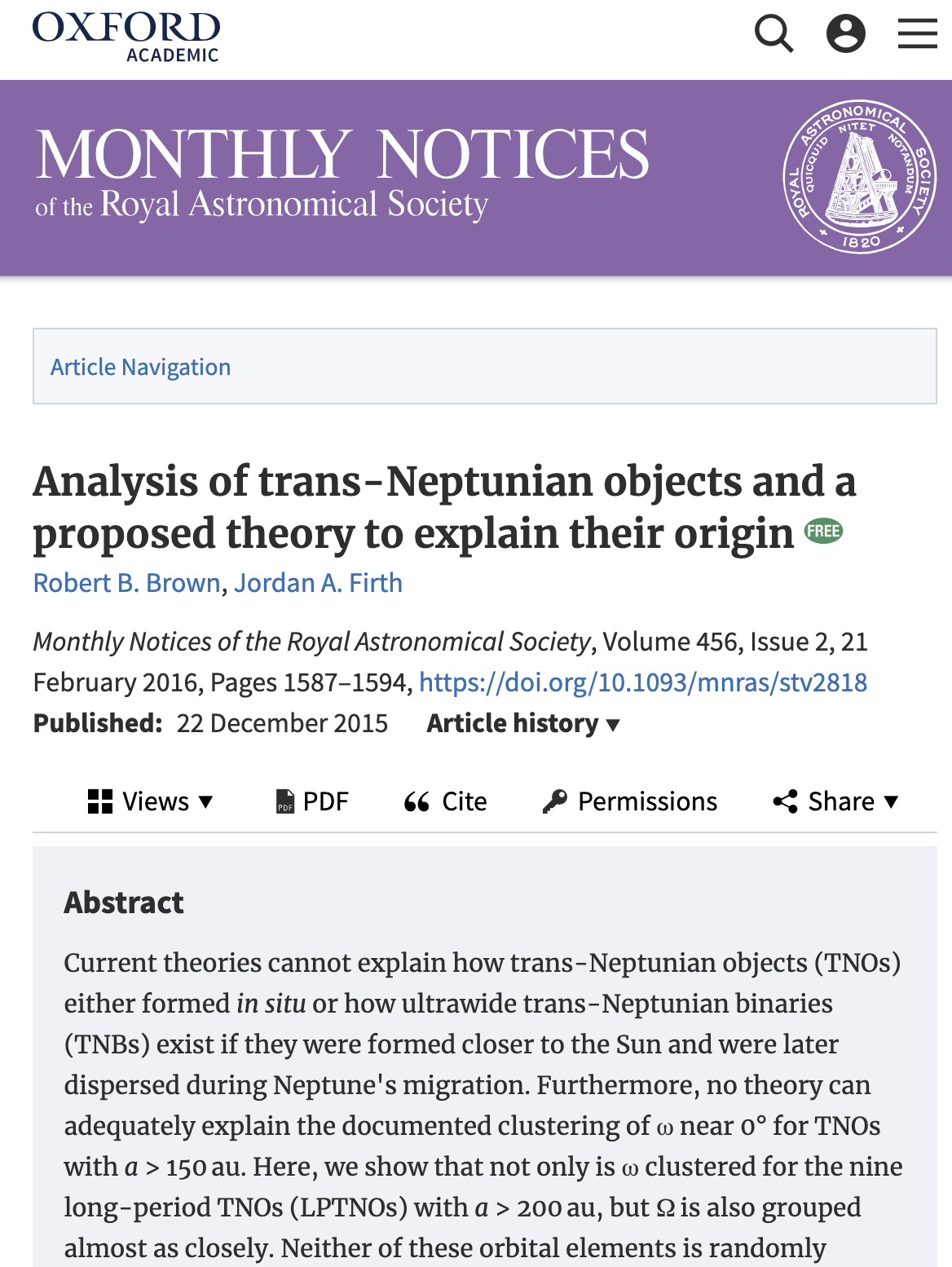 All 2,300 TNOs whose orbits are known (taken as a group) have ω (argument of perihelion) values that cluster near either 0° or 180°. Chance could produce such a departure from a random distribution only once out of 10,000 times!

See Analysis of trans-Neptunian objects and a proposed theory to explain their origin, 2017, MNRAS.

Anyone interested can duplicate these results provided by astronautics Professor R. B. Brown. He downloaded from the Jet Propulsion Laboratory’s Small-Body Database the orbital elements for all 2,300 TNOs with known orbits. He then constructed a histogram for w that showed two prominent peaks—one near ω=0° and one near ω=180°. A simple chi-square test showed that the distribution was non-uniform with a confidence level of 99.99%. Professor Brown concluded that “many TNOs recently received powerful thrusts from near the plane of the ecliptic. Thrusts directed up above the ecliptic, produced ω values near 0°; thrusts directed downward produced ω values near 180°. He projected many TNOs and asteroids back in time and showed that Neptune’s gravity could have provided that thrust for only a few of these bodies over the last 22,000 years. Therefore, other planets near the ecliptic plane were involved. Were these TNOs even closer to the Sun than Neptune?

* Updated January 2018 -- RSR's FULL GF & HPT video on YouTube: While our best-selling video is still available on DVD and Blu-ray (for yet another way to share with friends and to watch at home and to preserve it for the day when Google closes down our YouTube channel) in order to reach a few thousand additional folks, we've also made the FULL VIDEO now available on YouTube for free...

* Dr. Baumgardner on RSR: You may want to hear Bob Enyart's 2007 interview of John Baumgardner!