* March 6, 2014 10:20 a.m. Update: Apparent suicide. Costello's death ends trial on day two. From Earlier, reporting from a Denver courtroom, American Right To Life president Leslie Hanks and Denver pro-life activist Tony Massey report for KGOV.com that Denver serial rapist and well-connected Democrat and pro-choice activist William Costelllo has not returned to court as scheduled and may have skipped bail. At 9:30 a.m., Leslie stated that there was a good chance that, based on the wrenching testimony so far in the case, he may have committed suicide. Costello's ankle bracelet is being reported over the previous hours in various locations around Denver including on 6th Avenue. Costello had been free for 17 months on an outrageously low bail of $150,000 (which requires only a $15,000 payment) even though he had been charged with multiple counts including rape, statutory rape, kidnapping, assault, threatening with a deadly weapon, and impersonating a police officer, all of which, in a system not biased toward Democrat activists, should merit no bail whatsoever, or in other jurisdictions, a bail amount in the millions. Yesterday's testimony from Costello's rape victims was so damming that this rapist undoubtedly realized that he would be convicted and be sentenced to life in prison. We expect to air an overview of this horrific case (see below) on Monday, March 10th here at KGOV.
* 2017 Pro-life teen girl sucker punched on video at Planned Parenthood mill
* 2019 85-yr-old seriously attacked and kicked on video at Planned Parenthood

* Denver Serial Rapist William Burton Costello Arrested: Bob Enyart and Leslie Hanks report on Colorado's 69-year old Everett Stadig, personhood activist and member of Denver Bible Church, who was assaulted in the line of duty (while collecting pro-life signatures). When the police DNA tested the suspect, they found out that William Burton Costello was a criminal wanted for serial rape of three women, ages 13, 22, and 49, from 2008 to 2011. (Update: Costello was charged with a fourth rape in 2013 and his defense attorneys have been desperately trying to help him get away with his crimes.) On today's show, Bob and Leslie briefly interview Abraham Lincoln look-alike Stadig. See write-up below.

Attack on Pro-Lifer Leads to the Arrest of a Serial Rapist
Law Enforcement Officials Release Rapist William Costello
Public Beware: Be on the Lookout for this Man
Costello has ties to leading Democrats up to former Gov. Lamm
District Attorney gives Costello only second-degree charge for
assault for breaking the hip of a pro-life at-risk adult 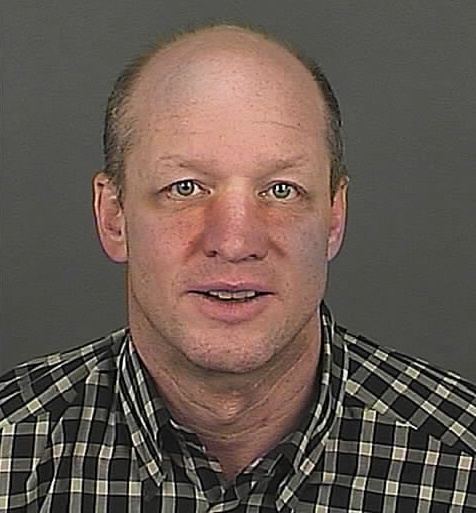 Update: Regard pro-choice serial rapist William Costello, Westword newspaper's reporter Michael Roberts has written that the DA's alleged spokeswoman Lynn Kimbrough has stated that "two other people came forward with information" bringing the number, in addition to the previously reported serial rapes, to five separate crimes, apparently in addition to the assault on Stadig. Halfway through Roberts report, he has a floating reference, "In the wake of Costello's arrest..." But what arrest? As Denver's media has generally underreported and misreported the assault on Everett that led to Costello's arrest and becoming a suspect as a serial rapist, Roberts doesn't even tell his alleged readers what the arrest was for, nor about the sixth victim, an at-risk adult who suffered a broken hip at Costello's hands.

Update: Apparently, on Aug. 11, 2012, the D.A. charged the perpetrator with only second-degree assault after only talking to the offender, whereas his office had not even talked to the pro-life victim, Mr. Stadig, who did not get to speak with the D.A.s office until Sept. 18.

Everett Stadig, long-time Mt. Rushmore employee, is an active Christian pro-lifer and an Abe Lincoln look alike. On June 30, 2012 during the final push to gather signatures for Colorado’s Personhood amendment, 69-year-old Stadig was collecting signatures in front of the Stapleton King Soopers grocery store when he was attacked and thrown off his bike to the ground by a man who became enraged because Everett was asking for signatures "to protect unborn children." A witness who saw the attack recorded the assailant’s license plate number and gave it to the police. Everett was taken by ambulance to the hospital where he underwent surgery for a broken hip.

In the following weeks, Mr. Stadig, concerned that the crime against him was not being investigated, enlisted the help of other pro-lifers and two volunteer attorneys to pressure the Denver police department to investigate the crime. Yet it turns out that the police were pursuing the matter, and eventually brought assault and rape charges against the perpetrator, a successful Denver businessman. 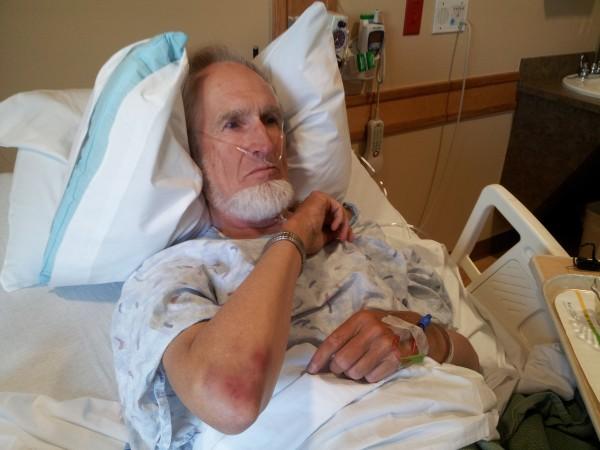 In August, William Costello was arrested for the attack on Everett Stadig. “Katie’s Law” allows law enforcement to procure DNA samples after a felony arrest. That DNA linked William Costello to three rapes for which he was charged on November 16, 2012.

Regarding the charge against Costello for the assault on Stadig, "It's rather shocking," said Denver Bible Church pastor and radio host Bob Enyart:

The police gave Costello a charge of only second-degree assault when Everett, a 69-year-old man, was attacked while straddling his bicycle and asking for signatures on his personhood petition. To add insult to injury, the D.A.'s office didn't even speak to the victim until September 18th, whereas they entered the mere second-degree charge on August 11th, after talking only to the perpetrator and not the victim. In addition to Everett, at least one witness, and perhaps others, spoke with police. The perpetrator, now known to be a pro-abortion Democrat with ties to high-profile governing officials including a former governor, was angry that Everett was a pro-lifer. Costello at first walked away toward his vehicle, then returned, and assaulted Everett by throwing him to the ground. The force of the impact broke Everett's hip. This is a first-degree assault on an at-risk adult and the Denver D.A. Mitchell Morrissey should upgrade this charge against this out-of-control and dangerous offender.

Correcting the charge to first-degree assault might also help to correct the media from falsely reporting that Costello's arrest was the result of "a fight in a parking lot." The characterization of the assault in this Denver Post headline, "Denver parking lot fight leads to suspect in three unsolved rapes," is absurd to everyone who knows meek and mild Everett. And it might help if the Post's reporter Jessica Fender would speak to the victim.

Kimbrough appears to have misspoke saying the arrest was in July, since the arrest affidavit is dated August 9 and the D.A. indicated to Stadig that this first arrest was made on August 11.

Costello, whose rape victims range in age from 13 to 49, as reported by the Denver Post, is a successful real estate broker who has ties to "high profile Democrats," all of whom of course are pro-abortion, including being a long-time family friend of former governor Dick Lamm who introduced in 1967 Colorado's first law to decriminalize the killing of unborn children. DNA evidence indicates that William Costello raped a 13 year old girl in March 2008, a 22 year old woman in 2010, and a 49 year old woman in 2011. The Post also reported that Costello was arrested while driving the car of a top political strategist, who they haven't named, while distributing yard signs to a Durango, Colorado Democratic campaign office, and that about a year after the rape of the 13 year old, Costello attended a birthday party for a grandson of Governor Lamm.

Back in July, Everett Stadig told the pro-life media that he was attacked because he was collecting personhood signatures. In a telephone interview from his hospital bed, Stadig told LifeSiteNews that the man was “in his mid-thirties and looked about six foot tall.” He refused to sign, and began to swear and shout at Stadig. “He was yelling ‘I’m pro-choice!’” Stadig recalled, adding that he used “most foul language."

Stadig explained that being ‘pro-choice’ meant pro-abortion, and again urged him to sign. At first the man walked away, but returned half a minute later, still swearing and yelling. "He said 'you don’t have a right to be here!'" Stadig related, "and I said 'I do have a right to be here, this is a Colorado Petition Drive'. Then he grabbed my petition pad, and with the same movement threw me to ground, and I was hurt so bad I couldn’t get up."

Seems Mr. Costello has a dog in the fight for personhood. Where is a rapist going to get rid of the evidence of his crime without the abortionist? American Right To Life's leading article on the rape "exception" has been updated:

As for the men who use women, like serial rapist William Costello who assaulted an elderly pro-life activist Everett Stadig who was merely collecting personhood signatures, rapists as a group are pro-choice because abortion entices them to think they will get away with their crime.

In this news report Denver District Attorney, Mitchell R. Morrissey said that this crime is one of the most “significant offenses that we’ve had” and that without Katie’s law the cases would have gone unsolved. Everett Stadig is thankful also for the dogged perseverance of pro-life attorneys Rebecca Messall and Barry Arrington. And the pro-life community is thankful that while Everett was working to protect the innocent and deter the guilty, he indirectly became involved in the apprehension of a serial rapist.

It remains to be seen whether Stadig's sense that the police were leaving him out of the investigation was merely wrong, or resulted from the pro-choice campaign activist being a well-connected Democrat, or because Costello was suspected in the more serious rape crimes. What is now known is that the D.A.'s office was more interested in talking to the criminal, Costello, than to the victim, Everett, and perhaps due to that failure gave this angry Costello a gift by undercharging him.

Additional Questions: Did the police attempt to obtain King Soopers surveillance video that is believed to exist prior to the D.A. filing a second-degree charge? Will the police let the victim know whether such video exists?

Hear Everett interviewed from his hospital bed just two days after his assault in the BEL radio program Romneycare upheld and Abe Lincoln felled. And see Stadig's role in the Hostility Met with Hospitality event hosted by Colorado Right To Life at a National RTL conference, which event helped to give traction to the pro-life strategy which will lead to enforcement of the God-given right to life of the unborn child, Personhood!