ENYART: So even though the family wanted to continue to medical care, you would have taken that decision away from the family?
HERN: Well, I think that is, a, I, I thought we going to be talking about abortion. This is really not a question I was prepared to discuss. It's clearly one in which I have interest in, and it relevant, but why don't we stick to abortion.

This transcript, first published statewide in the Denver Catholic Register, alerted a hundred thousand families to the truth that abortionist Warren Hern unwittingly admitted: that it is people like him who should decide who lives and who dies. The pro-abortion American Bar Association summarized the case as "the first attempt in the nation to wrest control of a patient's fate out of the family's hands." Oliver Wanglie wanted to continue care for his 87-year old wife Helga, as did their two children and other doctors at the same hospital, yet they were dragged into court by two Minneapolis doctors and the hospital that was trying to get the state to overrule the family. This case illustrates the deception of abortion and euthanasia advocates who claim to believe that these "life and death decisions" are for the family and individuals to make, when in reality, they will urge the state to come down against the family on the side of killing the innocent.

The family should be overruled by the government imposing the euthanasia and abortion industry's decision to euthanize (or abort) the innocent, including our own loved ones. This is the actual belief system of this nationally-known abortionist. By claiming to be "pro-choice," he is a liar. The entire Planned Parenthood organization, by extension and evidence, also lies about its own position. The abortion industry's lack of action against, and even arguably its funding of, China's forced-abortion program proves that Planned Parenthood itself is not even "pro-choice" but simply pro-death. Abortionist Warren Hern violates even his own immoral standard, and would usurp the family's supposed right, and give that power to the government, to "make that decision" regarding life and death. The truth is that the abortion and euthanasia leaders believe "unwanted" human beings should die. The family's desire is irrelevant to them, unless it coincides with their own desire to kill the innocent.

* After Sending an Undercover Operative into Warren Hern's Abortion Clinic: Colorado RTL now has access to the rare, original hardback copy of Boulder abortionist Warren Hern's infamous textbook. We hope to post scanned excerpts from this book soon to the internet. For now, consider the caveat to Hern's invitation to colleges to debate abortion: "We insist that visual aid materials not be presented by either side." –Warren Hern, Abortion Practice, (Philadelphia, J.B. Lippincott) p. 325 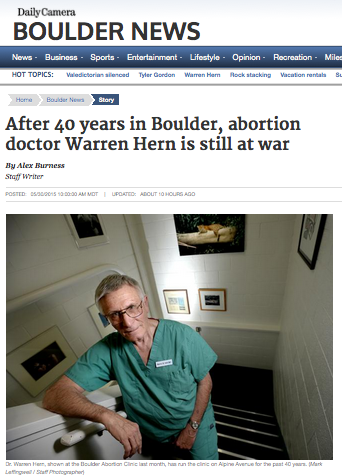 * The Boulder Daily Camera: May 30, 2015, After 40 years in Boulder, abortion doctor Warren Hern is still at war. From this Alex Burness article:

Hern collects himself and, with cutting, dead-serious eyes, says, "You see why I hate these people? I hate them." He repeats that twice more under his breath.

The feeling is quite mutual.

Bob Enyart — radio host, Denver Bible Church pastor and spokesman for Colorado Right to Life — roundly condemns the killing of abortion doctors but says there is "no justification" for their role in "the long war against God."

Even in cases of fetal anomaly, he says, "It's never a thorny issue whether to love a child.

"You don't love the child by killing it, and you don't love the mother by turning her into an accomplice," Enyart says. "Warren Hern is not motivated by a desire of freedom for the woman and her family. As with the left generally, his is a worldview of killing the innocent and protecting the guilty."

* Request of KGOV Listeners: DONE! (Thank you!) If you can find a news report about the court case over the life of the woman in the coma in this story, please click above at Comment: at TheologyOnline.com, and post that information! Thanks! -The KGOV Staff

* Register for Bob Enyart's Hermeneutics Seminar or Get the CD! Come on out at 6:30 p.m. Wednesday April 29th to Denver's Brown Palace to enjoy Bob Enyart's Hermeneutics seminar on Tools for Studying the Bible! Registration is only $30 for a person (anyone from the moment of the beginning of their biological life) and $50 for a couple (a man and woman that is :) ! If you can't attend, you can purchase the Hermeneutics seminar on CD for $34.99. Just call the BEL studio at 1-800-8Enyart (836-9278)!

* Hierarchy of 16 Hermeneutics: A hermeneutic is a tool for understanding the Bible. Proper hermeneutics are invaluable. At Bob Enyart's April 29th seminar in Denver's famous Brown Palace hotel, we'll study this prioritized list of hermeneutics:
God: existence, eternity, and entity (i.e., the Godhead)
His Story: the plot, or storyline, of the Bible (grasping the Bible's overview is the key to its details)
His Nature: living, personal, relational, good, and loving (includes J.O.N.A.H. & N.O.A.H.)
Christological: Christ-centered, the text is His Word (the work of the righteous, and hatred of the wicked)
[Here, the third hermeneutic, His Nature, now takes precedence over, and swaps places with, His Story]
Context prioritized: God's Nature; His Story; the dispensation; the book; chapter; paragraph; sentence
Literalness: Scripture presents a literal message, and contains figures of speech, symbols, parables, and poetry
Historical/Grammatical: method emphasizes original languages, cultural and historical setting
Covenantal vs. Dispensational Principle: Paul instructs students to "rightly divide the Word" 2 Tim 2:15
Prophetic: Speaking God's Word; also, predictive prophecy; and non-prophecy (predictive only in hindsight)
Sufficiency Principle: Scripture presents ample revelation on everything vital to our spirituality (accountability)
Spiritually Discerned: God gave His Word to the world to lead men to Christ, but much is written to His own
Typology: people, events, objects, rituals, etc. serve as symbols of Christ, salvation, heaven, etc.
Inerrancy: Not translators and scribes but the original autographs (like DNA) were breathed by the Holy Spirit
Numerology: numbers at times are symbolic: 3 for God, 6 for man, 12 for Israel, 40 for judgment, etc.
First-Mention: knowledge of good and evil leads to death; seed of the woman; justification by faith
Hebrew Parallelisms: poetry; couplets; alternation; inversions; story symmetry

Today's Resource: SPECIAL: Order on five CDs for only $99.99 and save! Now, you can listen to all five of Bob Enyart's The Plot Bible Study Albums on CD for a low price of $99.99! If you've never listened to Pastor Bob Enyart's Bible study seminars on The Plot, The Tree, and the companion studies titled The Law of Moses, The Last Days, and Details Galore (on miracles and healings), you owe it to yourself to order The Plot Audio Set right now to enjoy Bob's best-selling and extraordinary studies on understanding the Bible and living the Christian life! (Or, read the book!) And remember, BEL offers a 30-day money back guarantee on our resources!