Why Isn't He Dead Yet?

* After 18 years of Raping the Same Kidnapped Woman: An earlier victim's reaction was similar to Bob Enyart's immediate reaction. Katherine Hall said, "I think he should be executed." Bob Enyart said of Phillip Garrido, "What's taking so long? Why isn't he dead yet?" (Related: Listen in to Court TV interviewing Bob Enyart who was calling for Scott Peterson's execution during the death penalty phase of his trial.) 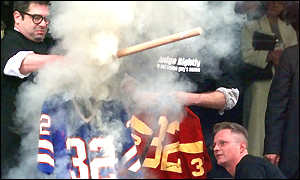 FLASHBACK - Caller Robert Defends OJ: on BEL on February 5, 2009, after phoning into perhaps the wrong radio program :) , Robert criticized Bob and Doug for burning O.J.'s memorabilia on the steps of the L.A. courthouse, and he attempted to defend the brutal murderer. Bob and Doug reviewed just some of the incriminating evidence showing Simpson's guilt. Then Bob explained to Robert that the Bible does NOT require two or three eyewitnesses to convict of a criminal, but two or three pieces of evidence including physical evidence. Also, while Robert assumed he was being "nice" toward O.J., in reality, he was making egregious accusations against the dozens of people who assembled the overwhelming evidence against O.J., accusing those people of framing an innocent man and thereby of being accomplices after the fact to help some other assumed criminal get away with a double murder. Of course, what Robert is accusing these innocent people of is a crime that God considers tantamount to murder, i.e., perjury and evidence tampering in a capital crime.

* Repentant Manson Murderer Susan Atkins Dying: Unlike the Associated Press headline and lead, Susan Atkins is not a "Charles Manson follower". She was. And she was one of his murderers who confessed to murdering Sharon Tate and her unborn child forty years ago. She's no longer follows Manson. And now she's terminally ill. Bob Enyart tells the story of Atkins' writing by hand a lengthy letter back in 1978 to the wife of one of Bob's friends, Wally, urging her to flee from the life of witchcraft and drugs that she was pursuing.

* Please Help With Our KGOV Telethon! Thank you! We've reached $8,250 of our $40,000 goal! The greatest way to help keep BEL broadcasting online and reaching more people is to sign up to automatically give monthly, or sign up for a monthly BEL DVD subscription service, a monthly Bible Study album or Bob's Sermons subscription. If you subscribe or give monthly, we multiply the amount you give times ten toward the telethon goal! (So a $24.99 subscription or automatic monthly donation brings $250 toward our $40,000 telethon goal!) Also of course, you can call 1-800-8Enyart for any subscription or to make a one-time donation or to purchase of a BEL Resource (or just click those links)! And remember, BEL materials come with our money back guarantee!

* Colorado RTL Sept. 26th Banquet! Please mark your calendar right now for Saturday, September 26, at 6:30 p.m. and make your reservation by calling Donna at 303-753-9394 (or to just get on their vital mailing list)! Do you know who Lila Rose is? You'll HAVE TO come out to see her! You'll have a tremendous time, and you'll be a great blessing!

* Help Colorado RTL Get Signatures: If you live in Colorado, could you help circulate the Personhood Colorado & CRTL 2010 petition? We need your help! If you live in any other state, can you help to advance personhood via the 2010 ballot or in one of three different ways?

Today’s Resource: You can learn more by browsing the KGOV Store's Department of Government which includes Bob's classic God's Criminal Justice System seminar on CD and you can read Bob's article (Google 1 of 2.1M for: God death penalty) or watch his DVD on God and the Death Penalty: NT Support for Capital Punishment!