"[E]xpanding" isn't really the best word to describe what is happening to the universe... A more accurate word for what the universe is doing might be "stretching".

Similarly, in 2019, NASA wrote that, "The space between galaxies is stretching..." (See more about this at rsr.org/expansion.)

* 2020 Experiment Proposal: Might it be theoretically possible to triangulate the distance from two distant galaxy clusters to an even further galaxy?

* 2017 Update Stretch Cosmology in Two Major Films! Stretch Cosmology was proposed in the Del Tackett-narrated fathom-event film Is Genesis History? (Tackett makes a cameo appearance of sorts in Enyart's Focus on the Strategy II documentary.) And it was presented in the other recent Fathom Event Genesis: Paradise Lost. (See the link below for its trailer to view the the plants sprouting up out of the ground on Day 3, and consider that as an analogy for how God stretched out the heavens on Day 4.)

* 2013 Update: See this by AiG astronomer Danny Faulkner, A Proposal for a New Solution to the Light Travel Time Problem, in the peer-reviewed Answers Research Journal! Dr. Faulkner mentioned that for the Day 3 creation of plants, God may have supernaturally pulled the plants out of the ground, and that this may be an analogy for how He stretched out the heavens on Day Four, causing the stars to undergo hyper-stellar-nucleosynthesis and actually, though supernaturally, pulling the light from the farthest stars across the universe to the Earth (and perhaps beyond). RSR extends this supernatural stretch cosmology in various particulars including by asking (and answering) why is it that by the end of Day 4 some stars had expended their available energy and others, nearly so, would run out of energy and supernova as observed more recently. And we add the following.

If the supernatural-to-natural boundary (SN2NB), where the laws of physics take over when God rests from His creative work, occurred earlier or later on Day 4, determines whether or not a physics theory is even theoretically helpful to explain how distant starlight arrived during that 24-hour period on Earth. If God supernaturally created the starting conditions after which the light would then naturally propagate to Earth, the SN2NB, at least conceptually, could have been earlier on Day 4 at which point God could watch the laws of physics take over for the completion of that Day's events. God liked His creation and would sometimes use the laws that He had brought into existence to perform even some of His subsequent miracles. So an "earlier" SN2NB is certainly possible. On the other hand, if God supernaturally performed most of what happened on that day, including the stretching of the light throughout the cosmos by miraculous means, that would put the SN2NB, at least conceptually, later on Day 4 and would make unneeded any physical theory about how that light naturally arrived on Earth. In fact if God's supernatural creative act was the effective means whereby light arrived on Earth, then creationist physical cosmologies themselves, while creative and even possibly ingenius, would each represent a dead end. The creation movement would be stronger if theorists and advocates readily communicated where they see the SN2NB and, if possible, why they see it there.

See an animation of this happening in the first 10 seconds of the trailer for Genesis: Paradise Lost.  The Hebrew word translated "sprout" appears in Scripture only in Genesis 1:11. The word daw-shaw',  considered related, appears in Joel 2:22, the "pastures are springing up..."

* Stretch Cosmology Proposed Solution: Bob Enyart has temporarily removed from this page RSR's own written SC description because he is considering submitting it to one of the creation journals. This program's 2011 audio, however, remains available (via the above audio controls). Check back here in late 2020 for a possible update. Whereas naturalistic star formation has never and cannot occur by the laws of physics, after the "formation" stage, RSR proposes that the correct answer to the starlight and time question will also explain why stars are at every other possible stage in their lifecycles. (Also, if anyone listens to our 2007 rsr.org/horizon-problem program, if you're interested, please feel free to email Bob@rsr.org and let us know if the guys used the "Day 3 analogy" in that program. Thanks!)

* Stretching the Cosmos, Etc., on Today's 2011 Program: Real Science Radio co-hosts Fred Williams and Bob Enyart discuss more great news stories from the Winter 2012 edition of Creation magazine. And the guys reply to a listener who asks why would a star die and collapse if the universe is only thousands of years old. 2013 Update: After a change of name, the guys now refer to this to this proposal, to solve the starlight and time dilemma, as Stretch Cosmology.

* Is God Outside of Time? Google that question and we think you'll find that of hundreds of thousands of related web pages, that RSR's answer and article is ranked by Google as #1 at rsr.org/time. The well-known claim that time slows down as an object approaches the speed of light also entails that at the speed of light time stops. However, if that were true, then a photon traveling through a vacuum could not have its own innate frequency (i.e., color). But it does.

* New Band-Aids Designed Without Glue By Copying the Gecko Toe: It's about time human engineers got around to reverse engineering the adhesiveness of the gecko's feet in order to manufacture a better Band-Aid. The Band-Aid was invented in 1920, making it eleven years older than the Big Bang which was invented in 1931. See the series of enlargements in the gecko feet image to get an idea of how God used form rather than glue to enable geckos to walk on walls.

* Post-Show Note: Real Science Radio is looking for a sketch artist! Help us create the RSR Dawkins Color Vision Challenge! Similar to our PZ Myers Trochlea Challenge (for which PZ honestly answered, "I don't know"), Bob and Fred are constructing a similar challenge but this time for Richard Dawkins, and regarding a different aspect of the alleged evolution of vision. The guys are hoping to get an artist to volunteer to sketch their challenge, and also, they're eager to get comments and constructive criticism emailed to them on the challenge itself. Done: rsr.org/3-to-1. 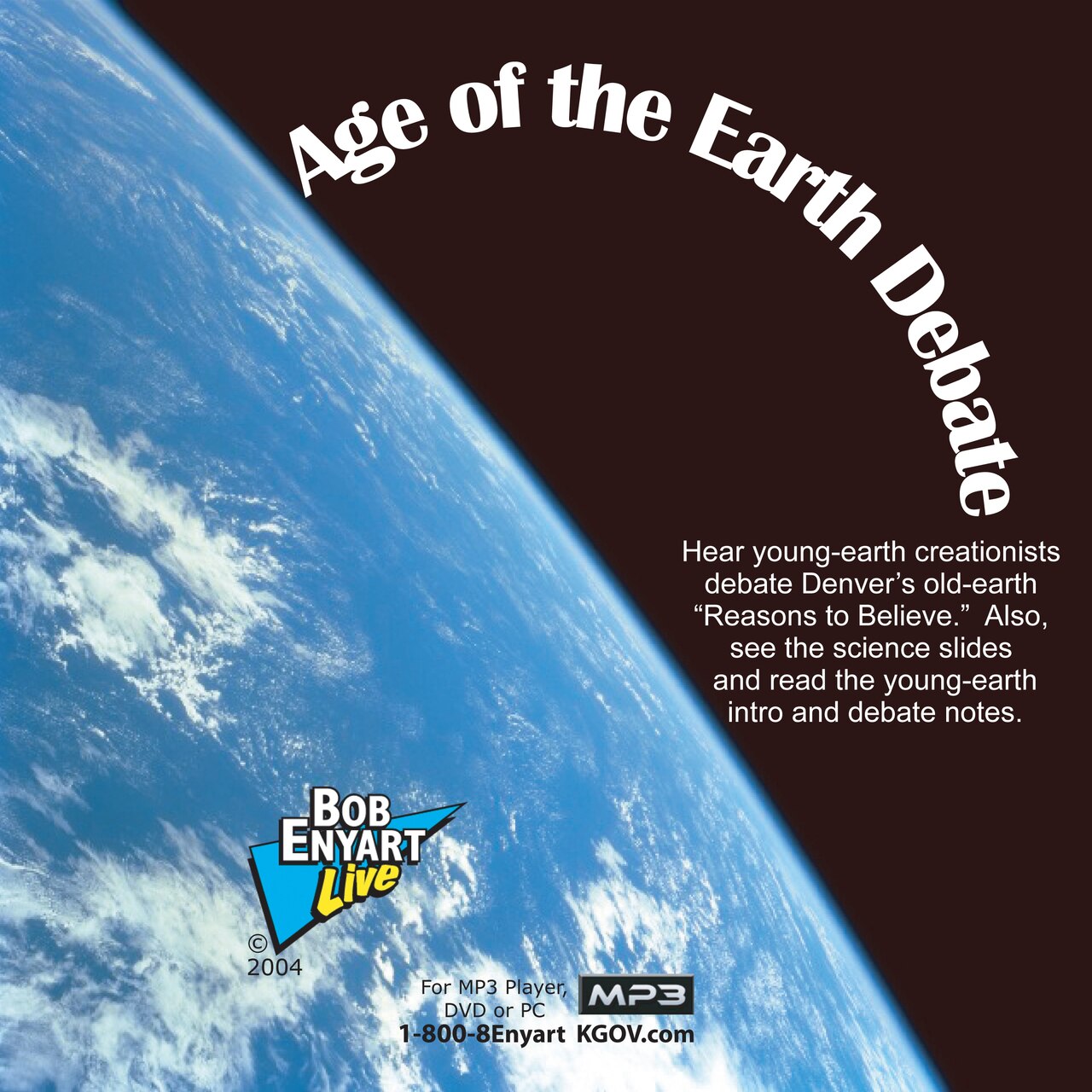 * Threes Everywhere: The number three reflected in the Trinity and throughout Scripture turns the Christian's attention toward the creation to see space existing in three dimensions, height, width, and length, as does time in past, present and future. The electromagnetic force operates in positive, negative, and neutral, and in light waves, red, green, and blue blend into the hues of the rainbow whereas and in pigment the three primary colors are red, yellow, and blue. We human beings on this third planet from the Sun experience matter primarily in three states, solid, liquid, and gas. The strongest shape for building is the triangle. Writers often give three examples and artists group in threes as in interior design, sculpting, and even movie directors, as they have the word trilogy (1, 2, 3) but no word for any other number of films. Photographers use the rule of thirds, genetic scientists discovered that the language of DNA uses only three-letter words, and the scientific journal Icarus has published a 2013 paper identifying a decimal system in the amino acids of DNA, which code thereby contains, at least once, all the three-digit values, 111, 222, 333, 444, 555, 666, 777, 888, and 999. And so we humans are body, soul, and spirit (1 Thes. 5:23), made in the image of God the Father, God the Son, and God the Holy Spirit. See also http://rsr.org/3.

Today’s Resource: We invite you to browse the Science Department of our online store! 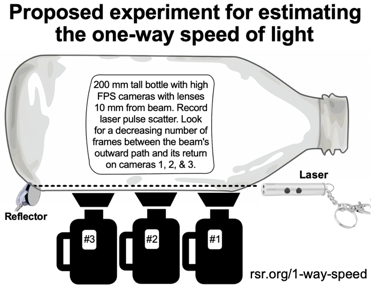 * One-Way Speed of Light Measurement: RSR's proposed experiment to measure the one-way speed of light was posted on this page on September 3, 2019 and on July 30, 2021 it was moved to rsr.org/one-way-speed-of-light. You can see a more detailed graphic of the experiment there, read the article, and hear Bob and Fred discuss the proposed measurement (and offer a grand prize to the person who can falsify our proposal).

* Proposed Triangulation Experiment: For measuring the distance to the stars, astronomers can use triangulation only to determine the distance to those nearest Earth, that is, stars up to 1,000 light years away. That's just within our own galaxy and even just within our neck-of-the-woods, for the Milky Way has a 100,000 light-year diameter. Other methods are used to estimate further distances. One concern of course with non-triangulation measurements is that they involve cosmological assumptions which can make them circular. On Dec. 30, 2019 RSR proposed yet another theoretical method (likely impossible in practice). If the same remote galaxy could be gravitationally lensed by two adjacent galaxy clusters, might that enable roughly triangulating the distance from those clusters to that galaxy?