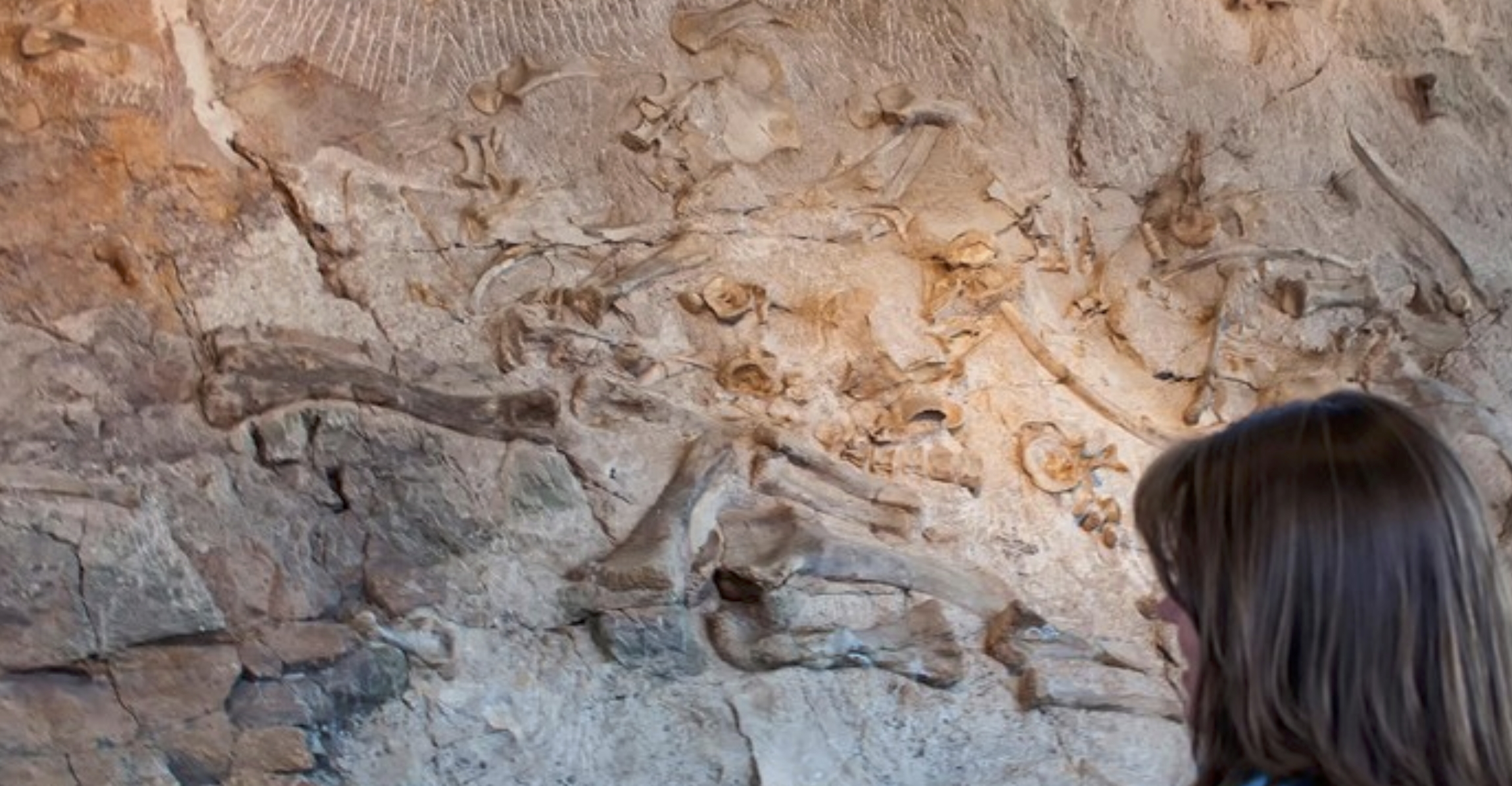 * Why were Dinosaurs Buried with So Many Clams?

And, why were ice age animals buried with so many clams? Co-hosts Fred Williams with Creation Research Society, and Bob Enyart, on this episode of Real Science Radio draw from a recent news report that Bob and Cheryl noticed while in traveling in the Rocky Mountains with their three youngest boys. An unexpected fossil dig at Snowmass is producing a jumble of mammoth, mastodon, Ice Age bison, and giant ground sloth! And clams. Yes, clams. Captain Kirk's Denver Museum of Nature and Science counted (on one hand) the number of animal species excavated in Snowmass, but they missed the number by one. Not surprisingly, they ignored the lowly clam, as evolutionists like to downplay the clams (many fully articulated showing rapid burial) that are often found with dinosaur fossils and the remains of other land animals). For example, Dinosaur National Monument could be called Clam National Monument, since more clams are found there than dinosaurs. So, what were all those dinosaurs (including a nearby Allosaur excavated by a home-school family) doing swimming with so many clams?

* Anti-Clam Bias 2020 Update: The Wikipedia article on the Snowmastodon site (as it's been called) lists mammoths, mastodons, ground sloths, horses, camels[!] and deer, but no clams, even though they were abundant. The Denver Museum is removing some of its web pages including the one that mentions clams at the site. Site owners can request that archive.org remove a page from their service and coincidentally that page is missing from there too. Some sleuthing though has recovered DMNS's text which states:

Bulldozer driver Jesse Steele discovers bones of a juvenile Columbian mammoth while working on the expansion of Ziegler Reservoir near Snowmass Village... The excavation officially begins. Using hand tools and archaeological techniques supplemented by a small backhoe, the Museum team opens up four of the sites that have produced fossil bone. Dig crews recover more mammoth and mastodon bones, and sediments containing the fossils of plants, invertebrates such as insects and clams, and a variety of microscopic fossils.

By the way, the snowmastodon.com site is also gone. And while the public relations launch of the Snowmastodon effort was extreme, as RSR friend Terry P Beh pointed out, the final report, though filling an entire issue of Quaternary Research, was "released without fanfare." After all, about the first radiometric dating report, "Some of the older dates cane from fossils in the upper layers while some of the younger dates came from those in lower strata." Thus, as Terry put it, "the search was on for 'better dates'". And evolutionists are nothing if not great at the dating game!

* Swinging Gibbons: Bob and Fred also talk about the latest Answers magazine on swinging Gibbons, and tonight's showing at Rocky Mountain Creation Fellowship of Darwin's Dilemma taking the Cambrian Explosion to it's logical, microbiological conclusion! (You can order this excellent DVD by calling 1-800-8Enyart.)

* Special Editions of Real Science Friday:
- BEL's famous List of Not-So-Old Things
- Bob's debate with Christian Darwinist British author James Hannam
- PZ Myers blogs against Real Science Radio so Bob hits back with the Trochlea Challenge
- Waiting for Darwin's Other Shoe: Evolution mag's cover story Darwin Was Wrong on the Tree of Life
- Microbiologist in Studio: Bob talks with the Creation Research Society Quarterly editor about new genetic findings
- Caterpillar Kills Atheism: describe how a bug could evolve to liquefy itself and then build itself into a flying creature
- And see the RSR Offer of $2,000 to get 16 letters of the alphabet in their correct places; $500 pd in 1998; $1,500 in 2010...

* For our RSR Friends: in case you miss other BEL programs, here are some of the atheists Bob Enyart has debated:
- ABC's Reginald Finley, called The Infidel Guy, from ABC's Wife Swap program; 3-26-07;
- TheologyOnLine's psychologist Zakath in a 10-round moderated written online debate, also available in soft cover;
- John Henderson who wrote the book God.com 6-15-2006;
- Carlos Morales, Fox News, Huffington Post, etc. reports on U of Texas atheists Bible-turn in program, president of Atheist Agenda 7-14-10
- Freedom from Religion Foundation founder Dan Barker (put the atheist sign near the Nativity at the capitol in Seattle) who was involved with the ministry of Kathryn Kuhlman, one of a group of so-called faith healers. (See a BEL listener who initially compared Bob to Benny Hinn until...) The BEL show was on 12-11-08;
- Leading anti-evolutionist Ph.D. Eugenie Scott of the Nat'l Center for Science Education, exhumed 5-6-05;
- Michael Shermer, an editor with Scientific American and the Skeptic Society who in in this famous 73-second excerpt on BEL denied that the sun is a light, illustrating that it's tough debating atheists when they're hesitant to admit to even the most obvious common ground. 8-28-03

* Post-show note: Bob mentioned a DVD, Raising the Allosaur, about a homeschool family who has the world's largest allosaur skull. There's a notice on Vision Forum's website about a related controversy.

* Today’s Resource: Have you browsed through our Science Department in the KGOV Store? Check out especially Walt Brown’s In the Beginning and Bob’s interviews with this great scientist in Walt Brown Week! You’ll also love Dr. Guillermo Gonzalez’ Privileged Planet (clip), and Illustra Media’s Unlocking the Mystery of Life (clip)! You can consider our BEL Science Pack; Bob Enyart’s Age of the Earth Debate; Bob's debate about Junk DNA with famous evolutionist Dr. Eugenie Scott; and the superb kids' radio programming, Jonathan Park: The Adventure Begins! And Bob strongly recommends that you subscribe to CMI’s tremendous Creation magazine and Ken Ham's Answers magazine!  (And you can order Darwin's Dilemma DVD by calling BEL at 1-800-8Enyart.)