Simpsons Back on BEL for Yet Another Election 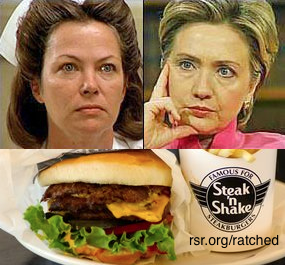 * The Simpsons on BEL: Bob Enyart interviews Homer Simpson for his views on the two-party system, throwing away your vote, and fooling Earth's voters. Then Bob asks the question, Is everything that Hillary says a lie? As a test case, he plays the first 10 seconds of her words to reporters flying on her campaign plane. Then regarding Hillary's futile ongoing effort to cast out her demon by coughing up a lung,

* Hillary & BEL's Nurse Ratched Waitress Story: Bob tells the classic story of the intimidating "Nurse Ratched" night waitress from the South Bend, Indiana, Steak 'n Shake and relates that to the way Hillary Clinton's staff have minimal ability (thankfully) to stop her from multiplying her self-inflicted wounds. 2020 Update: Our ole' Steak 'n Shake in South Bend has closed. All we have left are the clogged arteries and memories.