* Abortion Nationally is from the Republican Supreme Court:
- Republican U.S. Supreme Court Justice Harry Blackmun wrote Roe v. Wade.
- The 1973 Roe 7-to-2 opinion was approved with a Republican majority of five votes.
- The 1992 landmark Casey opinion upheld "abortion rights" though 8 Republicans and a single pro-life Democrat (who dissented) comprised the court.
- In 2002 Casey author and Republican Justice Antonin Scalia said, "I will also strike down a law that is the opposite of Roe v. Wade."
- In 2008 on ABC's 60 Minutes Scalia said, "there are anti-abortion people who think that... the [constitution's] equal protection clause requires that you treat a helpless human being that's still in the womb the way you treat other human beings. I think that's wrong."
- In 2012 Republican Chief Justice John Roberts voted to uphold the socialist, pro-abortion Obamacare.
- In 2017 Republican Gorsuch became the poster-child for the "pro-life" movement's support for judges who reject the child's God-given right to life (see video below)
- In 2021 with the court's Republican majority (6.5 to 2.5, with Democrat Sonia Sotomayor having been nominated to the federal bench by G.H.W. Bush and then promoted to the court by Obama), Brett Kavanaugh and Amy Coney Barrett were part of the Republican majority that upheld the socialist Obamacare.
- From 1973 to 2020 every Republican justice on the court has agreed with the Democrat Party's platform and the central holding of Roe that the baby is not a person and has no right to life.

* Ginsburg Replacement Post-show Update: After the death of Ruth Bader Ginsburg, anti-abortion abolitionists noted that even with the confirmation of an anti-Roe replacement jurist: "Supreme court history informs us that Roe’s reversal would still be unlikely. In 1992, the US supreme court was made up of eight Republican nominees, including three from Reagan and two from Bush. The lone Democrat nominee on the court was Justice Byron White who dissented in Roe v. Wade. So there were eight Republicans and a pro-life Democrat. The Planned Parenthood v. Casey (1992) decision should have been a slam-dunk overturning of Roe. Yet even the ’92 court upheld legal abortion. The majority was made up entirely of Republican nominees." See also AmericanRTL.org/dred and for a list of the president's named possible replacements, see kgov.com/Trumps-44.

Denver, CO -- "American Right To Life is offering $10,000 to National Right to Life," said the group's president Leslie Hanks, "if they can name a single justice on the current U.S. Supreme Court who has ever stated, in an interview or a ruling or even a dissent, that the unborn child has a right to life. The point is that after decades of NRTL’s compromise strategy, there is not a single justice on the court who acknowledges the child’s right to life."

"In 1981, after president Ronald Reagan agreed he would sign federal personhood legislation for the unborn, National Right to Life and their longtime attorney James Bopp actually opposed that effort claiming they supported a states' rights approach," says the group's site AmericanRTL.org. "A quarter century later notice that NRTL and Bopp have long opposed all state personhood efforts." 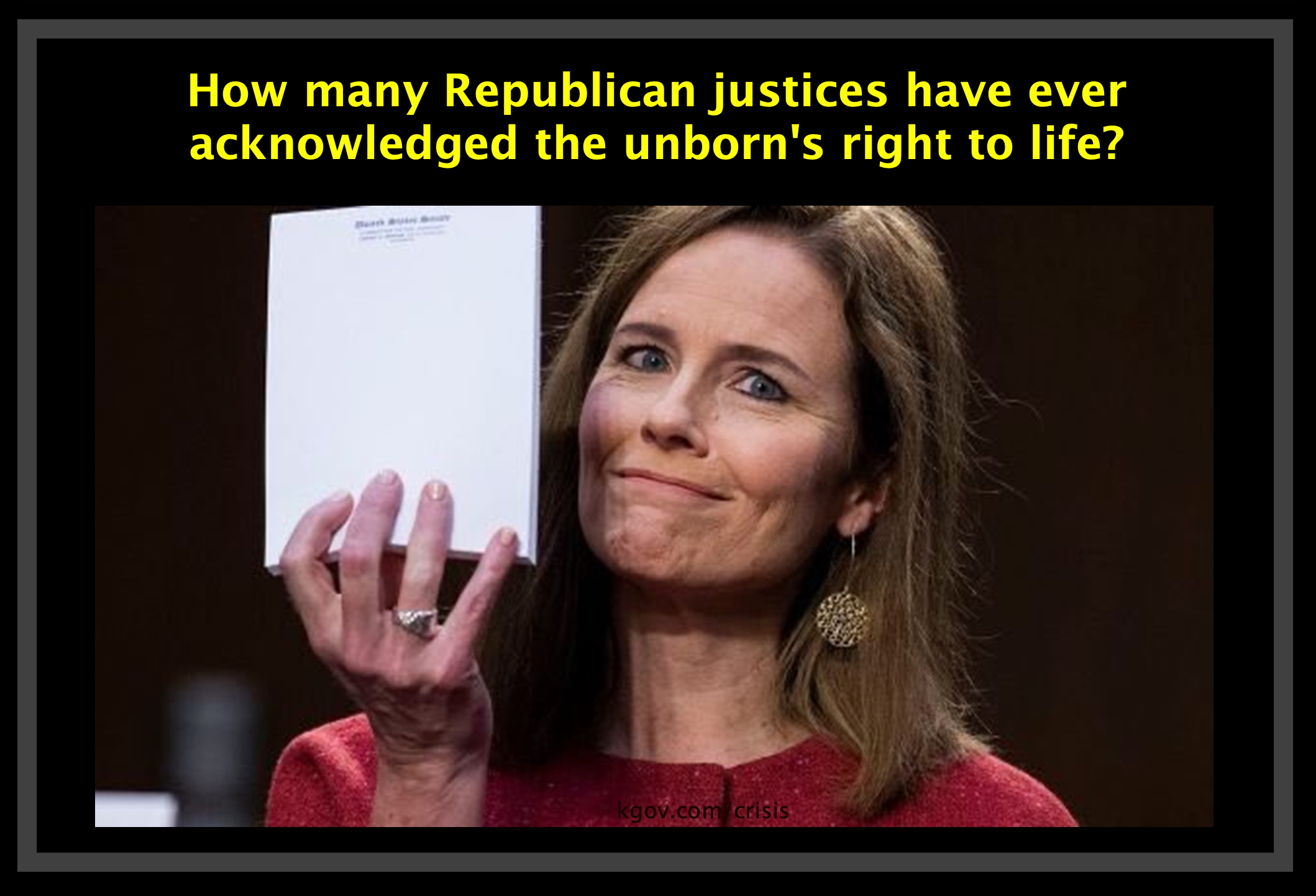 In contrast, for the elections in 2008, 2010, and 2014, Colorado pro-lifers turned in a third of a million signatures of registered voters to force statewide referendums to acknowledge in law the personhood of the unborn child, and while the first two campaigns lost, we narrowed the margin from a 3-to-1 defeat to 2-to-1.

Update: For years we have extended this to offer $1,000 to the first person in the general public to provide evidence that a single one of the hundreds of Republican judges in the federal judiciary has ever held, in a ruling, dissent, or otherwise, that the unborn child has a right to life. On 9/17/20 Jason Troyer provided ARTL with evidence that Donald Trump's nominee David Dugan may merit this distinction. ARTL will investigate this promising development and hopefully, despite Dugan's strong stand, will not find any indication that he would uphold regulations legislating how, when, or where an unborn child can be "legally" killed. In the meantime, we renew the offer of $1,000 to the first person who provides evidence of another federal judge (we do, of course, hope there is more than one) who has ever held that the unborn child has a right to life. 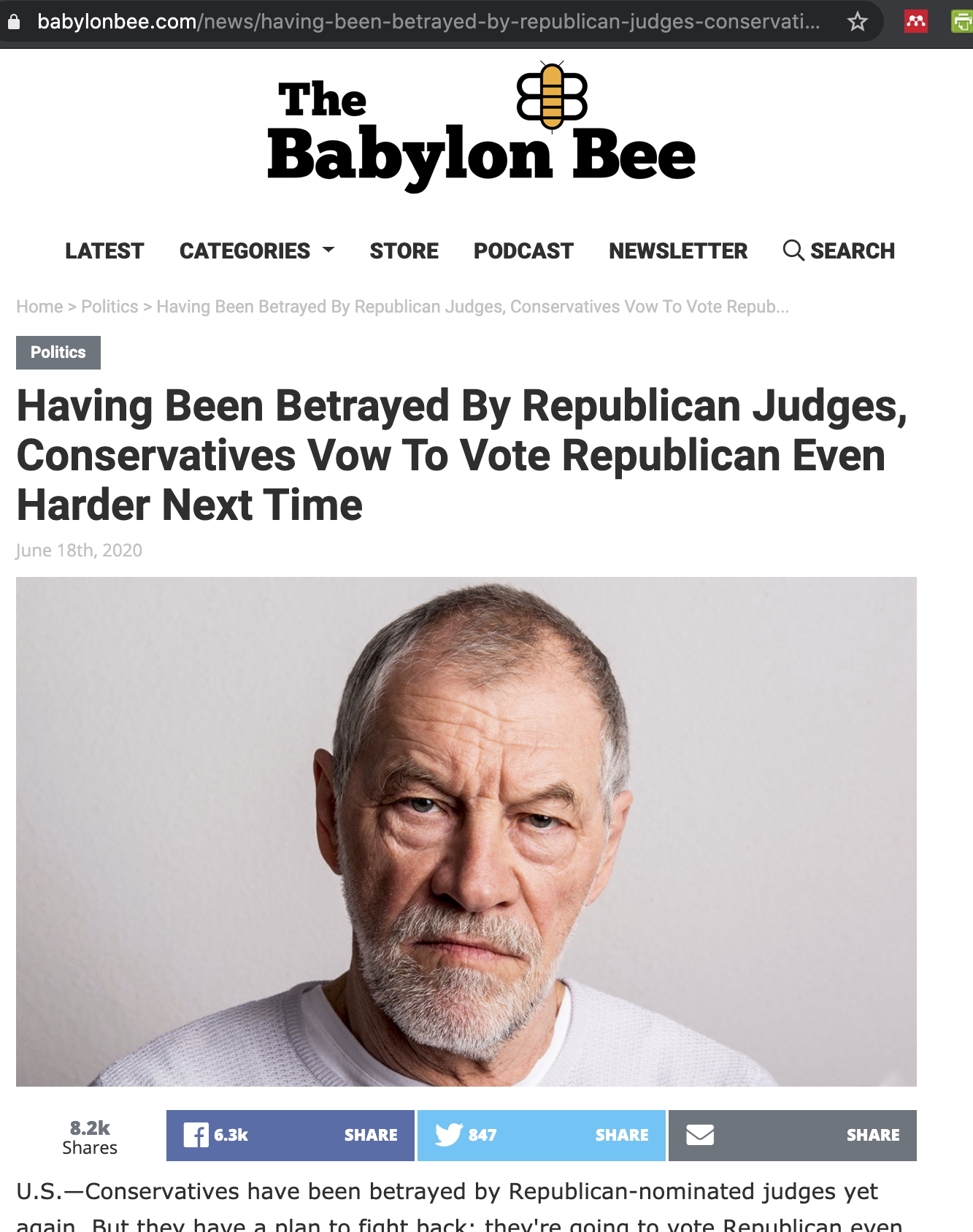 * The Republican Judicial Crisis: Continuing through 2020, Rush Limbaugh, James Dobson, Sean Hannity, et al., have continued to mislead Americans to believe that it has been Democratic judges that have ruined America. The truth is that as a nation we have hardly survived the destruction brought about by our "own" Republican judges. Unless our goal as "conservative", "pro-life" Americans is to destroy our nation, then the last thing we'd need is more Republican judges. See the small list, just below, of the immoral havoc they have unleashed on our land.

WHEREAS, the God-given right to life from our Creator comes not at birth but at our creation; and
WHEREAS, the state of Mississippi unleashed the "legitimized" killing of unborn children on America in 1966 using the brutality of rape as an excuse, and Colorado then extended that state's crime in 1967 by "legalizing" abortion for rape, incest, and health excuses; and
WHEREAS, in the past twenty seconds, an unborn child in America was killed by a surgical or chemical abortion; and
WHEREAS, in the pro-abortion Roe v. Wade U.S. Supreme Court decision Republican Justice Harry Blackmun wrote that if "personhood is established, the [abortion] case, of course, collapses, for the fetus' right to life would then be guaranteed... The [pro-abortion side] conceded as much on reargument"; now, therefore,

BE IT RESOLVED by the Colorado Republican Party that we support the 2008 personhood amendment sponsored by Colorado for Equal Rights to define "person" to include any human being from the moment of fertilization.

* Ideas for Your Primary or Caucus: Vote for Alan Keyes! And do not vote for Mitt Romney or any other candidate who promotes or is willing to tolerate the intentional killing of innocent children. Leslie Hanks, v. p. of Colorado RTL called in to suggest, if you go to a caucus, here are suggestions that may even spark ideas in other states:

Colorado Right To Life urges everyone to go to their local precinct caucus (i.e. neighborhood meeting) Tuesday evening at 7 p.m. Things to do while there:
* introduce the two resolutions below;
* volunteer to be elected as delegate to your county convention;
* bring a personhood petition to collect signatures.

To vote you must have been registered by Dec. 4, 2007. Click to go to ColoGOP.org or ColoradoDems.org website to find out where your local caucus is being held. Suggestions: Arrive a bit early (6:50 p.m.). Find out if the group tends toward liberal views (by bringing up the war, education, health care, etc.)

If the group is conservative:
* introduce the two resolutions below to be voted on (bring one or two print outs of each resolution)
* ask to be elected as a delegate to your county convention (to be held between Feb. 20 and March 17)
* if you have a personhood petition ask folks for signatures.

* Weitz Super Bowl party: From their CP website along with great photos: "The Collaborators Project drew a crowd of 50 people at the home of Gary Meggison, the Senior VP of The Weitz Company Rocky Mountain. This gathering marked the first event since The Weitz Co. obtained Permanent Collaborator Status for failing to stop constructing America's largest abortion facility. Pro-lifers from all over the state of Colorado showed their persistence and dedication to protecting the unborn by increasing the social tension that has all but disappeared in this country, despite the slaughter of thousands of innocent babies each day. The time of food, fun and fellowship was topped off with excellent hot dogs, brats and even buffalo dogs. One pro-lifer, Grandma Connie, brought spinach Stromboli and eggplant parmesan. The pro-lifers considered this one of the best Super Bowl parties they have ever attended, and of course, all for a good cause. And as reported at YourHub.com for Lakewood Colorado: "On Sunday February 3, 2008 the Pro Life Group held a Super Bowl Block Party in front of the Meggison home. They had about 50 people show up. They listened to the football game and had a barbecue in the back of a pickup truck serving hamburgers and hot dogs and all of the trimmings. Their motto is "NO CHILD KILLING WITH TRANQUILITY" and to that end they have protested in front of several of the Weitz Company executives and they plan on continuing the strategy indefinitely. The 24 year old, Will, has stated that he has dedicated his life to eliminating abortion in the United States. Watch for the print edition of the Rocky Mountain News this Thursday, Feb. 7th, for a story about the Collaborators Project Super Bowl Party!"

* Terrorists Cut Third Mideast Internet Cable: A third undersea Internet cable has been damaged in the Middle East, adding to the disruption in online services after two other lines were cut earlier this week, a cable operating firm said....

* Homosexuals Fouling San Francisco Bay: Two and a half million gallons of sewage has spilled into San Francisco Bay from a treatment plant and health officials are warning the public to avoid touching water...

* Global Warming Burying Folks in Snow: in Japan, China, and under seven feet in Oregon!

* Mouse Catches Cold: Scientists genetically engineer mouse to create lab creature on which to research treatments and cures for the common cold. Bob Enyart adds, "Just don't let the thing escape the lab, because then we'd end up with a billion mice sneezing germs all over us!"

* Abercrombie Obscenity Citation: Virginia Beach police seized store-front posters and gave an obscenity citation to a Abercrombie and Fitch store manager and pervert (sorry for the redundancy). "This kind of restores your hope in mankind..."

* Post-show Errata: Bob was remembering back thirty-five years ago to when the Miami Dolphins, after an undefeated season, played the College All-Stars in pre-season on July 27, 1973. Bob wrongly stated that Miami lost, when actually they won, 14 to 3. However, online game reports do indicate that despite the loss, the All-Stars outplayed the Dolphins throughout most of the game.

Today's Resource: If you subscribe to the BEL Televised Classics, you will be able to watch one of the shows just transferred from studio beta tape to DVD, titled, Bob Debates Evolution. It's a classic in and of itself. Click on the Subscription Department in the BEL Store, or call us at 800-8Enyart to subscribe to Bob's Topical Videos, or the BEL Televised Classics, or what our longtime listeners tell us is the best resource ever created by Bob Enyart Live, our Monthly Bible Study Albums!