RSR with the QED Guy on Logic Lessons 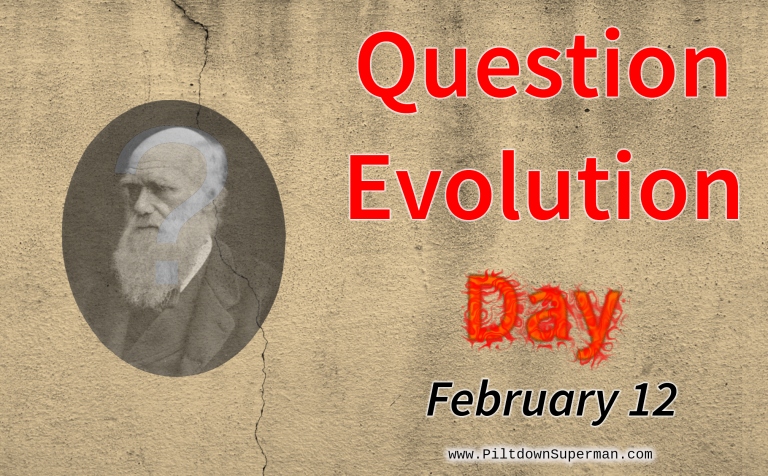 Today’s Resource: Get the fabulous Carl Werner DVD Living Fossils and his great prequel, Evolution: The Grand Experiment! And have you browsed through our Science Department in the KGOV Store? You just might love it!

Creationism & Logical Fallacies: (post-show update): Of course as part of our effort toward maintaining intellectual integrity, we regularly challenge our own positions and those of creationists generally, toward evaluating their veracity. Aside from quirky errors committed by some creationists (like confusing Noah's Ark with creation by implying that God only created one pair of each created kind), we assert that the creation camp has its own logical fallacies. Other than this first example below, on numbers, the logical fallacies we refer to seem to be matters that creationists agree with atheists on.

Eternal Numbers: A 2014 article in Answers magazine claims that God "made numbers", asking, "So did God create math...? He certainly made numbers..." RSR rejects this claim. Through eternity past, our triune God existed in three persons. God is not and never was a unitarian deity as the fictitious god Allah is described. (For more on that, see A Christian Answer to Euthyphro's Dilemma.) Nor was our God only two persons. As with the mystery of the Trinity, eternally, He has been three persons in one Godhead. The article, Is Math Just A Tool?, continued, "When God declared that everything He made was 'very good,' this included... numbers" (Tagliapietra, Answers, Jan. 2014, p. 31). But once you have your 1-2-3s, you have all the numbers. And therefore, you also have their relationships. In the most real and most certain of ways, God is truth, and spirit, and love. Thus God did not create truth, nor spirit, nor love. Neither did He make numbers.

Can Science Prove Anything Absolutely?

Creationists commonly agree with atheists in giving this answer: No, science cannot prove things absolutely. That is often the answer whether the discussion is about a theory, a hypothesis, or even anything at all.

1st: It is said that science cannot “prove” a theory. It can only disprove it. In this sense, a theory is a far-reaching claim about how the physical world functions.

2nd: Then it is said that science cannot “prove” a hypothesis. It can only disprove it. A hypothesis is a much more narrow claim about the nature of a particular element, reaction, force, etc.

3rd: Further it is said that science cannot “prove” anything. We allege that in this vein, creationists have surrendered far too much to atheistic relativists. As a corollary, to this, we hear that science cannot prove anything but it can only disprove things.

Sources: 1. A theory can “never [be] proven correct” on PBS.org; “can never be shown to be correct” at gsu.edu; 2. UCMP at the Berkeley department of paleontology. 3. A popular creationist homeschool textbook says, "Science cannot prove anything. The best science can say is that all known data support a given statement. …there is no way that science can prove anything." Wile & Durnell, Exploring Creation with Biology, 2nd Edition, 2005, p. 33; Science, "cannot be certain about anything in an absolute sense. ...its method never allows certainty" and then perhaps contradictorily, "science is not the only means of giving us true information..." Greg Koukl, Stand to Reason, 2013; “all scientific knowledge is tentative… nothing is final. There is no such thing as final proven knowledge in science” at psychologytoday.com.

Scientific Absolutes: The claim that science cannot absolutely prove anything is related to the more extreme and easily falsified atheist claim that there is no truth. Yes, we Christians take the Scriptures as our highest authority. But millions of people lived prior to Moses and Job, and it is not as though they had no ability to know truth. (They could even know God, as a number of them did, and God is truth.) There are various ways of obtaining or possessing apodictic, or absolute, knowledge. Consider the common claim, as in this quote from Berkeley, that "a hypothesis cannot ever be proven, only disproven." Has that been proven? To disprove a hypothesis is to prove its negation. (A hypothesis: The reason that even very large array telescopes will never find the center of the universe is because the universe has no center. Falsification: A theoretical falsification is the growing redshift data that increasingly indicates that the universe does have a center. Disproving that hypothesis proves another: The universe has a center.)

Absolutes vs. Omniscience: Knowing some things absolutely does not equate to knowing everything. Could it be that the especially extreme claim that science "cannot prove anything" is really just unintentional hyperbole? Those making such claims seem to confuse something with everything, and therefore confuse our ability to know some things absolutely with our inability to know everything. Some claim that the best that scientific investigation can do is to bring you closer to the truth (i.e., closer to understanding reality). However, if science doesn't know absolutely that:
- light travels faster than sound, nor that
- the solar surface is hotter than the lunar, nor that
- electromagnetic opposites attract,
if it were that much in the dark, then science could not bring anyone "closer" to anything. However, science does know these things absolutely. When some argue that science cannot tell us anything, it seems that what they really mean is that science cannot make us omniscient. If that's what they mean, though, then that is what they should say; for the overstatement we hear only serves to promote the relativism of materialism. Lacking omniscience does not prove the lack of all knowledge. RSR hopes that creationists will realize that they have been unnecessarily agreeing with atheists by making such an extreme claim.

Real Science Radio has other disagreements with creationists on such assumptions, but for now we'll add one last observation, and then let these suffice as our first shot across the bow. :) We see the matter of historical vs. observational science as mostly a manufactured issue. We do not only make careful observations and do repeated experiments in the laboratory. Human beings live that same way. We cook, work, and read while making careful observations and performing inherent repeated experiments. In a dream, every time we read a book the words can change; in the waking world, we know that the words on our printed pages do not rearrange themselves into varying messages. That alone is a form of absolute scientific knowledge. If we didn't know that, we couldn't trust the words we read in a book, whether a dictionary or the Bible. Claiming that science can tell us nothing absolute is tantamount to saying that we can have no trust in our minds, nor our senses, and if this were true, of course we would have no ability to trust any input, whether from the Bible, or, like ourselves and the millions who lived prior to the Scriptures, from any source whatsoever. We assert that the claims of the impossibility of certain scientific knowledge are concessions to the relativism of the materialist.

If you have a couple favorite scientific observations, facts, laws, etc., that you believe are absolute, we invite you to email them to Bob@realscienceradio.com and we'll consider posting them, along with some of our favorites! Thanks!

RSR vs. Creationist Views of Forensic Science [from rsr.org/forensics]

Test Our Analysis: Atheists often make a materialist claim that we can only be certain of what our five senses tell us. We assert that many creationists make a similar error when they try to relegate forensics to a second-class science. In so doing, they are backing into the traditional demarcation problem, trying to decide what does and does not qualify as science, perhaps without carefully considering the implications of their claims. We invite you to test this analysis to see whether or not we easily falsify this claim about forensics. In CMI’s article by wonderful creationist Shaun Doyle, note both the distinction between “present” and forensic science, and the use of quotes around the word science:

Real Science Radio asserts this claim is overly broad and therefore incorrect. The excerpts below list all the justifications provided by Doyle. Many events in the past (such as sun flares, the distribution of a genetic mutation, volcanic lava flows, etc.) can have far more certain descriptions and explanations than can any number of explanations for phenomena scientists observe in action. Note that CMI’s reasons for diminishing forensics apply equally to "observational" science:

A Fatal Arbitrariness: Creationists are arbitrary in attributing such concerns to forensic science as though they do not apply also to other science. As a result of this arbitrariness, the argument is meaningless because the exact same body of evidence can be used to argue the exact opposite, that that forensic science provides greater certainty than observational science. Anecdotally, forensic science has even corrected eyewitnesses who identify the wrong suspect in a lineup.