As DBC Fights the State, Coronavirus Fights... the FLU? 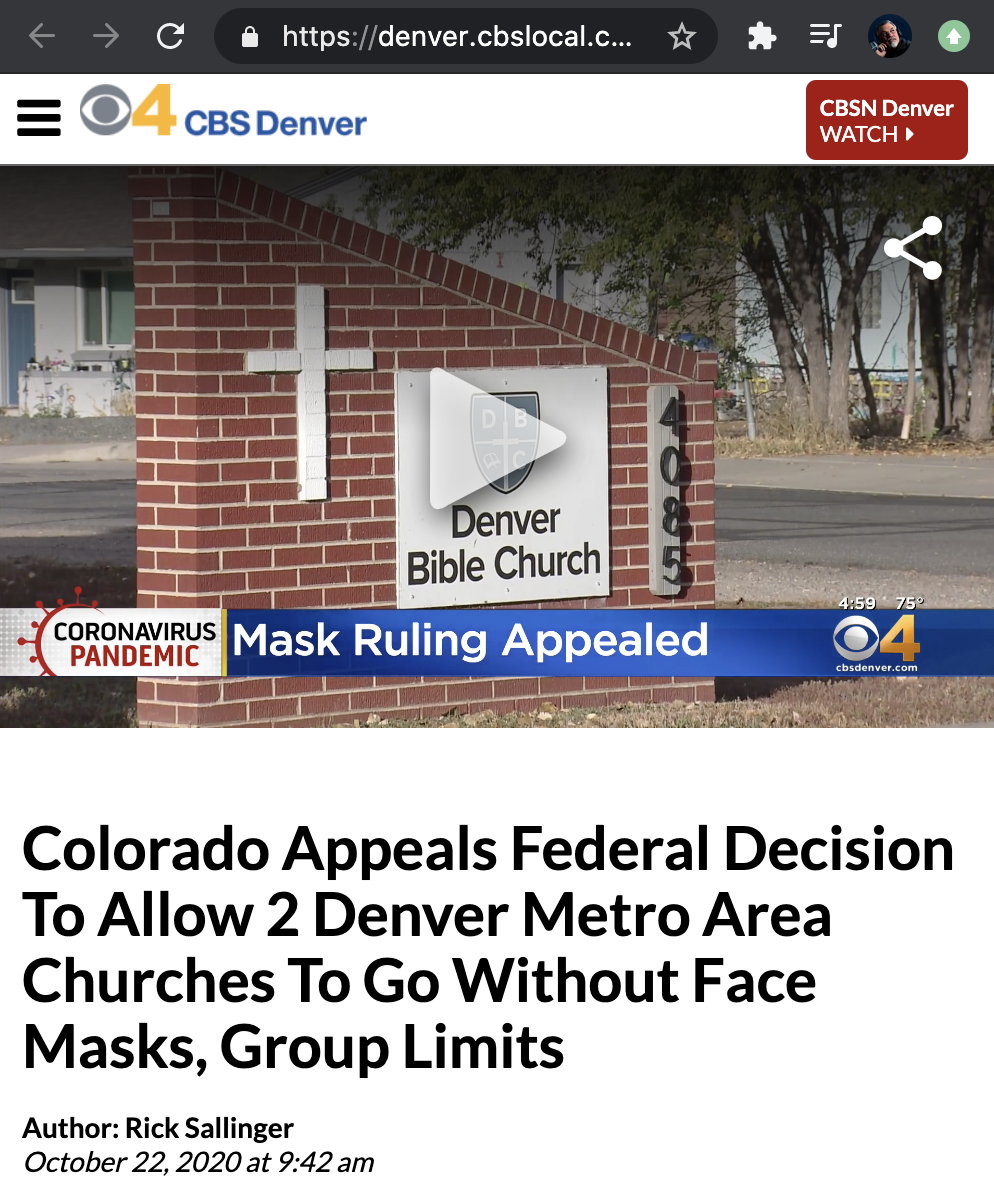 * 12/13/20 NBC News Update: "Denver Bible Church... sued the state to continue worshipping indoors. A federal judge ruled in their favor in October, saying the state cannot force congregants to wear masks or limit gatherings. The following month, the U.S. Supreme Court ruled that restrictions on capacity at houses of worship and religious events are unconstitutional. Colorado conceded this month that the high court's decision made it unlikely that the state could enforce restrictions."

* Colorado Gvt's Motion to Dismiss: Colorado filed their Motion to Dismiss conceding to the Denver Bible Church and Community Baptist Church congregations win, striking down the state's overreaching COVID restrictions on attendance limits and wearing masks during religious services at these churches.

* Colorado's Attorney General Mocks Churches: The U.S. Supreme Court, in the Jack Philips' Masterpiece Cakeshop case, reprimanded the state government for being hostile to believers. Now in their Motion to Dismiss their appeal of the Denver Bible Church win, on page 10 they describe churches as "in the same category... as trash processing." Precious. And intentional. Of course, for our part, we are honored to stand with those who pick up the trash. And of course, a typical garbage man has far more honor than the lawyers working for Colorado's governor's office.

* October News Reports: Pastor Bob and Pastor Joey Rhoad's lawsuit injunction victory has been reported by dozens of outlets including the Denver Post, CNN, Breitbart, LifeSiteNews, 7News, News 4 2nd, 1st, Telemundo Denver, Charisma News, Christian Headlines, 700 Club, @1776Stonewall, One America News, Thomas More Society, the Washington Times. While many have thanked us many others have been critical and even, sadly but as expected, filthy. The 10th Circuit has temporarily issued an administrative STAY so until the case proceeds, legally, we're back where we were a few weeks ago except that now we have a win under our belt! 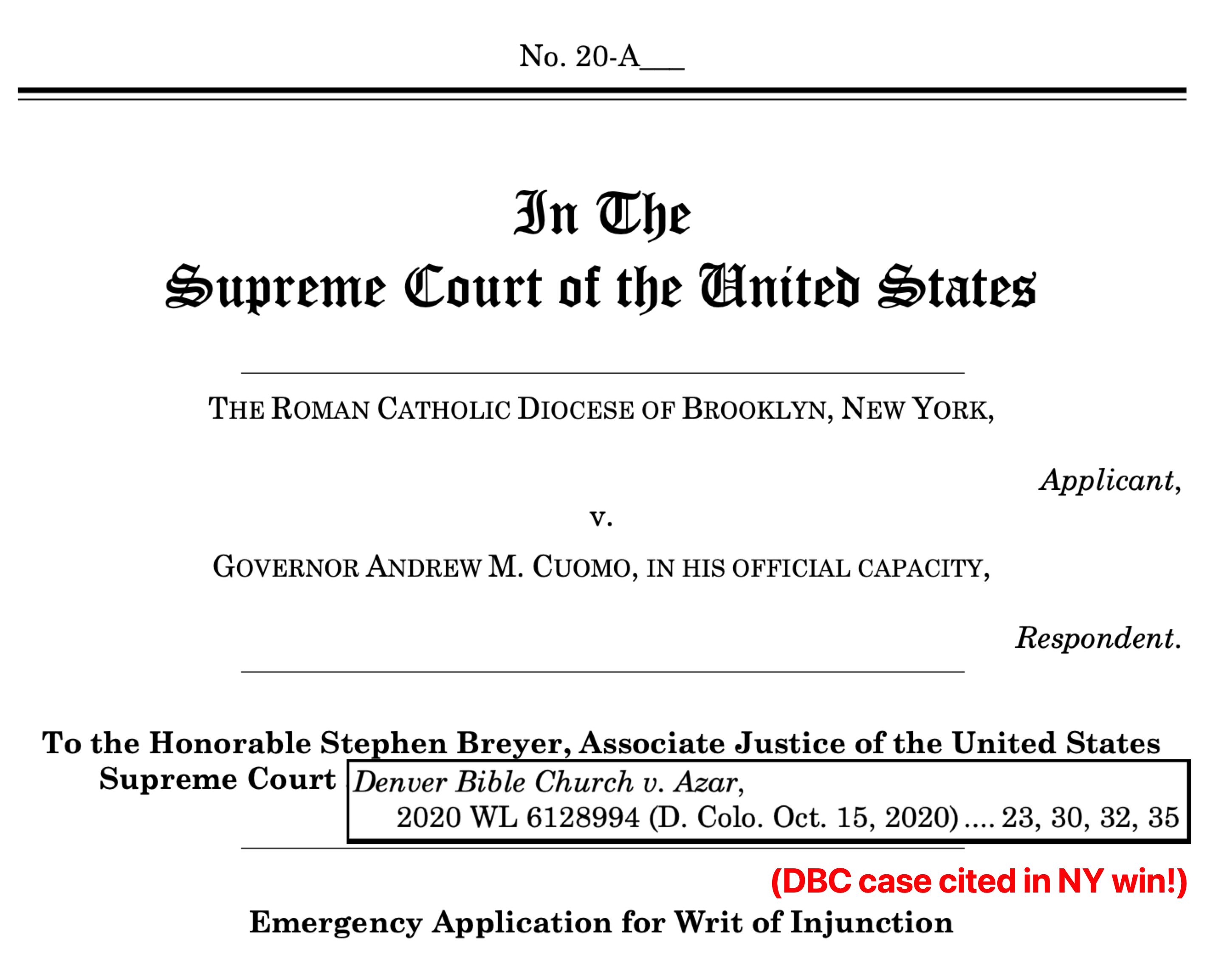 Meanwhile, Bob ponders why in the world influenza cases globally have plummeted while COVID cases soar? Might the two phenomena be related?

* Difference Between DBC & High Plans Lawsuits: An attorney friend of ours, Barry Arrington (who is anti-evolution, anti-abortion, and has represented one of our DBC members who was assaulted while personhood signature-gathering), won a December 2020 case in the U.S. Supreme Court for the High Plains Harvest Church in Eaton (north of Denver). We congratulate Barry and High Plains! Among the differeences between the cases, our Denver Bible Church case argues that churches have greater liberty than mere commercial interests. And just like plaintiffs "judge shop", the Supreme Court can "plaintiff shop" and "case shop". We did appeal to the high court, but they took up the HPHC case instead. Here's a note one of our attorneys, Brad Bergford, wrote to Pastor Bob and some of our BEL listeners:

I appreciate the enthusiasm, and it is warranted. As Pastor Bob pointed out, we are in danger if we are satisfied being treated not worse than businesses. After all, businesses are suffocating, and there is no end in sight to the stranglehold being applied to them. It should be noted that because we won an injunction against the enforcement of the mask mandate and the capacity limit on behalf of our churches, and because the tide has been turning slightly in favor of First Amendment protection, our case led directly to the state's "voluntary" lifting of mask mandates and capacity limits in churches. That led to the State abandoning its appeal at the Tenth Circuit. Ironically, the advantage that  Barry had in his case and the reason that he was able to get to the Supremes is that he lost at the district court level whereas we won. He appealed to the Tenth Circuit and then to the Supremes. The law is clearly on the side of the approach he has taken, but our aim is to regain the special protection for free exercise set forth in the First Amendment.

So, we rejoice with Barry, but our eyes are on events further into the future, and we have nine more claims to be adjudicated before all is said and done. Please pray for our success as our success is the success of the American people.

Thank you again for your enthusiasm!

* On Today's Program: After discussing the DBC lawsuit, Bob then airs audio from one of his geneticist heroes, Dr. John Sanford, inventor with his colleagues at Cornell University of the gene gun about John's newest book, The Sexual Holocaust.

Bob squares off against the Executive Director of the Colorado ACLU, Jim Joy in a televised debate on a Denver PBS station. Watch as joyless Jim hesitantly admits to the ACLUs support for the sale of child pornography. And which of the two opponents do you suppose will better know (or admit) the ACLUs own role regarding Jack "The Dripper" Kevorkian and his killing of sick people? Ultimately, the two men debate who is most qualified to govern, pagans, or biblical Christians. Another must see video!