The Three Places In Which Men Live 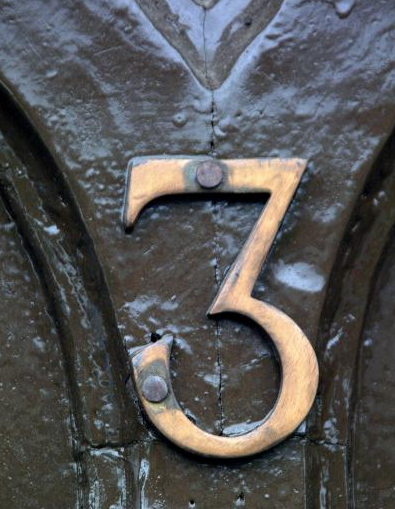 * Heaven, Hell, and This Life Between: These are the three places in which men live, and men are themselves tripartite.

* UPDATE: See an updated version of this show at rsr.org/3.

* Made in God's Triune Image: Then God said, "Let Us make man in Our image, according to Our likeness..." (Gen. 1:26). God exists as three persons in one Trinity, and consider then the triune nature of a human being. But first see the Bible's extraordinary use of that number. Christ was three days in the tomb, which Jonah’s three days foreshadowed, as did Abraham’s three days of thinking that he would sacrifice his son Isaac on that same hill called Golgotha, the Skull, and Mt. Moriah (Gen. 22:14; 2 Chron. 3:1). Israel's three patriarchs are Abraham, Isaac, and Jacob. The priestly tribe of Levi is from Jacob's third child (Gen. 29:34), as Leviticus is the third book of the Bible. And the day the law was given, the sons of Levi killed “about three thousand men” (Ex. 32:28), whereas the day the Spirit was given, “that day about three thousand souls" were saved (Acts 2:41; and see 2 Cor. 3:6).

The Hebrew Scriptures comprise three sections, the Law, the Prophets, and the Writings (Luke 24:44), and God created three archangels. The most noteworthy women are Eve, Sarah, and Mary. The magi brought gold, frankincense and myrrh. Three persons (one being the Son) started their public service at thirty years of age: Joseph (Gen. 41:46), a deliverer of his people; David (2 Sam. 5:4) seated on the messianic throne (2 Sam. 7:12-13); and "Jesus Himself began His ministry at about thirty years of age" (Luke 3:23). God could have led Esther to fast for two days, or four; and He could have kept Jonah in the whale for one day, or a week, but three days and three nights prefigures God’s plan of salvation for Christ’s time in the grave. For Jesus "rose again the third day according to the Scriptures" (1 Cor. 15:4). And thus, the triune Christian God, the mystery of the Trinity, Three Persons in One God, is the one God whose testimony we can trust (answering both the philosophical problem of the origin of the one and the many, and Euthyphro's Dilemma by Socrates), having imprinted our world and even ourselves with His triune nature.

The number three manifested in Scripture turns the Christian's attention outward to see space existing in three dimensions, height, width, and length, as does time in past, present and future. The electromagnetic force operates in positive, negative, and neutral, and in light, red, green, and blue blend into the hues of the rainbow whereas and in pigment the three primary colors are red, yellow, and blue. We human beings on this third planet from the Sun experience matter primarily in three states, solid, liquid, and gas. The strongest shape for building is the triangle. Writers often give three examples and artists group in threes as in interior design, sculpting, and even movie directors, as they have the word trilogy (1, 2, 3) but no word for any other number of films. Physicist Richard Feynman in his book QED asked how many fundamental actions are there to account for nearly all phenomena in the universe regarding light and electricity to which he answered: "There are Three!" Photographers use the rule of thirds. Genetic scientists discovered that the language of DNA uses only three-letter words. And so we humans are body, soul, and spirit (1 Thes. 5:23), made in the image of God the Father, God the Son, and God the Holy Spirit.

And mankind is made in God's image and likeness, image referring to our form, and likeness to our essence as sentient, morally-responsible persons. Regardless of Charles Darwin's hope for evidence that apes eventually began standing erect, the thousands of kinds of animals made by God, along with all the four-footed beasts, have a stooped stance and look to the ground, whereas men and women stand upright with a heavenly gaze. For the first thing that God created was a form, that is, an image, for the eternal Son to indwell (Col. 1:15; Rev. 3:14: Heb. 1:3; 5:5; 10:5; 2 Cor. 4:4; John 1:14; Phil. 2:5-6; 1 Tim. 2:5; Rev. 1:13-18). And in that image "He made man," and not in the image of apes (see AmericanRTL.org/Darwin). But He made them "male and female" as Christ affirmed (Mark 10:6), "from the beginning of creation." Moses wrote in Hebrew and the Latin  translation is imago Dei: "So God created man in His own image; in the image of God He created him; male and female He created them (Gen. 1:27). And because a fish is not made in God's image, one can ea

t another without guilt, and it is impossible to "murder" a tomato or a turkey, but murder can be committed only against a human being. For God prohibited the shedding of innocent blood, "for in the image of God He made man" (Gen. 9:6).

Today's Resource: For our BEL Telethon, please consider one of our monthly subscriptions that will not only help support BEL, but they also promote better understanding of the Bible and will equip you to be a better witness to those around you.

* Free Gift: When you sign up for any monthly subscription or give a one time donation of $50 or more, we will send you Bob's brand new DVD of his classic teaching series: The Tree of the Knowledge of Good and Evil.