Related: Four days after this RSR program aired, the European Space Agency
announced they had photographed an actual landslide on Comet 67P,
an allegedly four billion year-old flying pile of rounded boulders and ice,
yet another TESS phenomenon, i.e., the Transient Events of the Solar System.

* Dozens of Recently Fallen Geological Attractions: Real Science Radio hosts Bob Enyart and Fred Williams present a list of dozens of notable geologic features, many of them claimed to have formed over hundreds of thousands or millions of years, which have recently collapsed. However, if Earth's geological tourist attractions of structures like spires and arches actually were that old, then mathematically, we would not expect to see gravity destroying so many of them so rapidly. The old-earth model and its rejection of the global flood is challenged by the observation that on average over the past half century, more than one collapse of a notable arch or other geological attraction occurs per year, without anything like an offsetting replacement formation rate of new gravity-defying attractions. Thus these thousands of known geological features were formed by an intensity of geological processes not at work today and the population of them, far from being steady, is dwindling.

* List of Collapsing Bridges and other Geological Formations: We thank Creation magazine and David Catchpoole for assembling his list of Earth's collapsing "ancient" features which then became the beginning of our own. So as a subset of TESS, our List of the Transient Events in the Solar System, here are the collapsed notable arches, etc. with no similar number of offsetting arches forming.
- Eye of the Needle on the Missouri River in Montana, the famous Lewis and Clark arch, first documented in 1805, which collapsed evidently from natural causes in 2002.
- Malta's Azure Window, the picturesque limestone arch on the famed Mediterranean island, is no longer as of March 7, 2017. Unlike many of the other formations in this list, an ancient heritage is not claimed for the Azure Window, but instead, that if formed a mere 500 years ago. (And still standing are 25 more arches on Malta's islands including the nearby Wied il-Mielah "Window".)
- London Bridge in South Australia was a natural arch formation on the coast that, since 1990, is no longer.

- Darwin's Arch in the Galapagos Islands fell on May 17, 2021, the event becoming a metaphor for the collapse of the guy's theory. [As documented at rsr.org/list, Darwin's finches can adapt in 17 years, not needing the 2.3 million presumed by evolutionists. A single finch species introduced to a U.S. Bird Reservation in the Pacific in only 17 years had diversified their beaks, related muscles, and behavior to fill various ecological niches, just like Darwin's finches.]
- Landscape Arch in Utah's Arches National Park, the fifth longest naturally occurring arch in the world (for now), became even less stable in 1991 when, after it's alleged "five-million-year history", a tourist just happen to catch on video a 70-foot slab fall off (see video below). Of the 43 known collapses at Arches since 1977, this partial fall was similar to the partial collapse in 2014 of the park's beautiful Ring Arch, which was part of the "Slick Rock" strata deposited allegedly "140 million years ago."
- Jah Man rock spire  in Castle Valley, Utah no longer has its peak at the very top after its collapse on Jan. 3, 2020.
- Island Archway, just off of Australia's Victoria coast and part of the "Three Sisters" geological formation, collapsed in 2005.
- Beautiful Punta Ventana arch by the sea in Puerto Rico collapsed in the precursor 5.8 magnitude temblor a day before the island's much more destructive 6.4 quake on Jan. 7, 2020.

- The Sentinel, in Bryce Canyon National Park, Utah, fell in November 2016. The National Park Service reports that in Bryce, erosion removes a couple feet from such spires each year! Yet the NPS also provides information to the media as in Britain's Daily Mail headline that The Sentinel, "has stood in Utah canyon for millions of years." And yet park officials explained the "life cycle" of such features as "often one of gradual formation and sudden demise." Hmm. Estimating the age of an arch is more difficult than estimating the age of a spire. Why? It is the "hole" of the arch that defines such a feature. Obviously, the "hole" does not pre-date the strata above it. Yet the relative timing of when that hole eroded as compared to when the strata above it hardened may be difficult to estimate. On the other hand, with a spire (aka a hoodoo), the estimated lifetime of the spire must include the time it took to eroding away any strata from it's base to its topmost point.
- One of the Twelve Apostles (probably Judas) on Australia's southeastern coast collapsed in 2005.
- Old Man of the Mountain, New Hampshire, formation on a cliff formed in the Ice Age that allegedly began two million years ago but that eroded into the face allegedly about 19,000 years ago but collapsed on May 3, 2003.
- Chimney Rock Nat'l Historic Site was a major landmark along the Oregon Trail in the North Platte River Valley in Nebraska, a spire that once stood much taller, 325 feet as compared to today's 286 feet composed of strata that the National Park Service identifies with the Oligocene (allegedly 34 - 23 million years ago).

- Wall Arch, the 12th largest and one of the longest of the 2,000 natural spans in Utah's Arches National Park, collapsed in August of 2008. The U.S. National Park Service website states that the park's geological features "tell a story of millions of years".
- God's Finger, Canary Islands, Spain (El Dedo de Dios) allegedly formed over about 250,000 years from rock laid down 14 million years ago, and fell in November 2005.
- Nye Beach, Oregon's massive, 100-foot-tall Jump-Off Joe formed perhaps as late as the 1800s but, according to the United States Geological Society, in middle Miocene sandstone that had allegedly been laid down 16M - 11.6 million years ago. Joe collapsed in 1916 and has completely eroded away.
- Ephemeral Arch, Valley of Fire State Park, Nevada, fell in May 2010.
- The 50-foot tall Cobra Rock formation near Moab, according to geology.utah.gov was capped with an allegedly 245-million year old sandstone slab over its allegedly 290-million year old body, all of which fell in July 2014.
- Goblins and the Duckbill, both in Oregon, didn't fall naturally. The Duckbill sandstone formation in Cape Kiwanda State Park, a nearly 10-foot wide outcrop, was knocked over by three punks, members of the gross national product. (See them in action on the video taken by these rocket-scientist vandals.) ABC News and the Huffington Post repeated from Oregon Parks and Recreation that the sandstone layer was 18 million years old and the Duckbill shape itself formed perhaps tens or hundreds of thousands of years ago. The HuffPo also reported that at Goblin Valley State Park, three Boy Scout leaders toppled an unstable "goblin", aka as a "hoodoo", which "forms when a harder rock sits atop softer rock. Over millions of years, the harder rock on top protects the softer stone directly beneath it." The goblin/hoodoo was made of Jurassic rock, which, according to the Post and the Geology Department at the University of Utah, is allegedly 160 million years old. (Unlike the three punks, at least the scout leaders had a defense. They were afraid the already teetering rock might roll down onto a child hiking on the path just a few feet below the rock.) 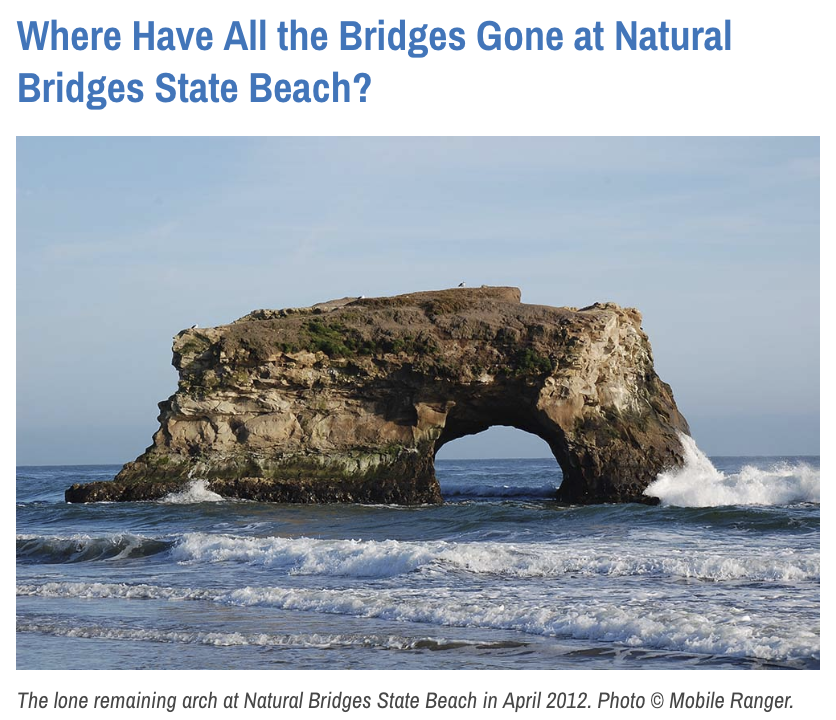 - Natural Bridges State Beach Needs Renaming: "Ranger" Molly Lautamo writes of the California beach, "Just one picturesque rock arch stands offshore... You can’t even call it a bridge because it doesn’t connect to anything" anymore. But back in the 1800s a natural bridge connected three arches. (See the historic photos at at the Santa Cruz-based site mobileranger.com.)
- 43 Spans Collapse at Arches: Significantly, according to LiveScience and the American Geophysical Union, since 1977 in Arches National Park, forty-three arch formations have collapsed. Yet there, and around the world, we see these structures fall but we don't see them form. At this rate of about one arch collapse per year, the math challenges the old-earth claim that the park's 2,000 arches result from millions of years of erosion.

- For more examples, see David Catchpoole's A dangerous view, from the Spring 2015 Creation magazine and Slip Slidin' Away over at momtastic. And also, let's all hold our collective breathe for Wikipedia's balancing rocks! :)

- Personal note from Bob: "Two of our sons have repelled a hundred feet off of one of the famed arches in Arches National Park. Clearly, they were not as safe as we had presumed they were at the time." Likewise, watch out for Mesa Arch in Canyonlands, said to be the most photographed arch in the world, which LiveScience reports "is safe from collapse for now".

- Note to RSR from an investigator with the federal justice system: At Garden of the Gods in Colorado Springs, Colorado, "Balanced Rock" has been reinforced with concrete by engineers (just in case). 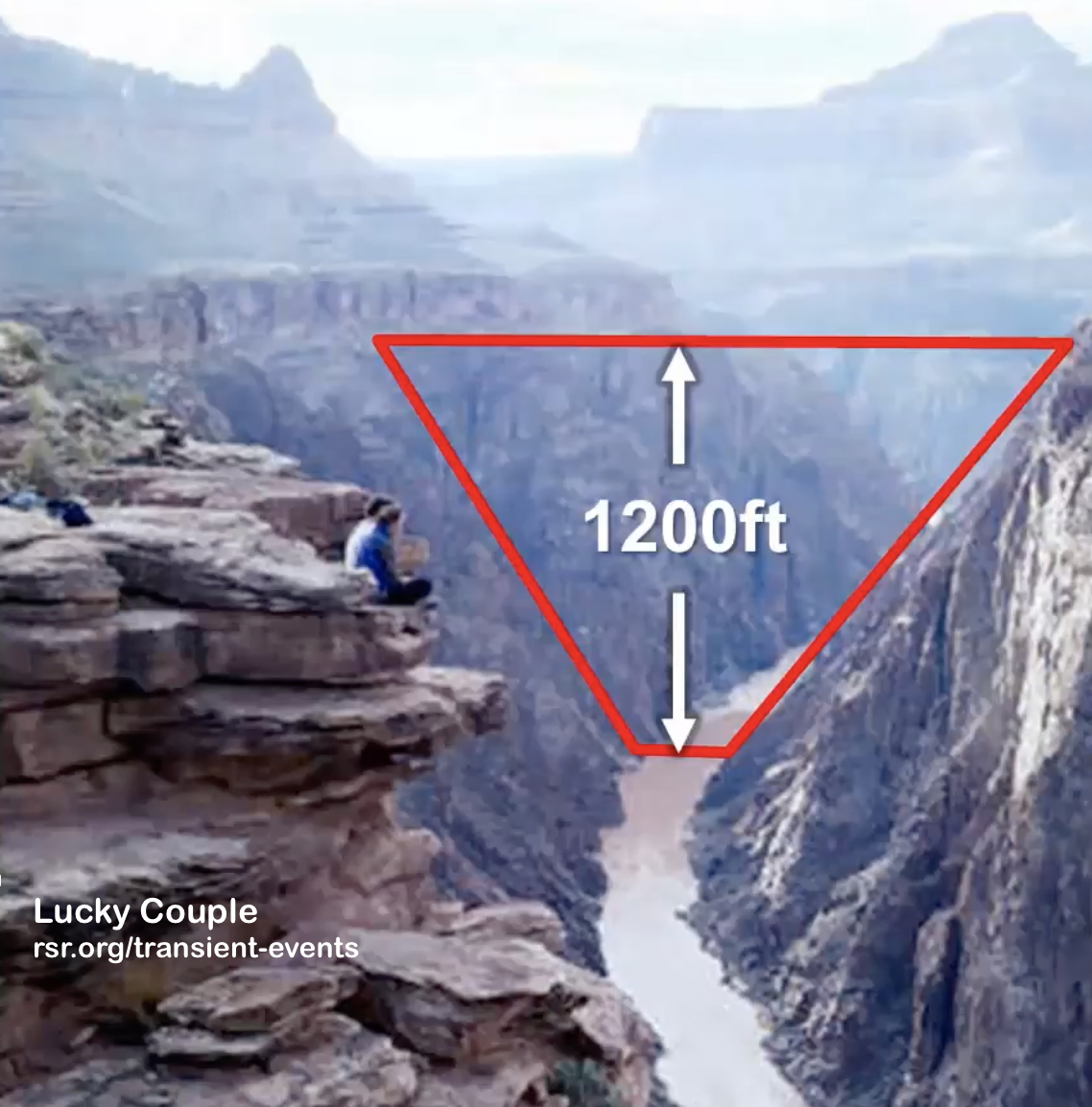 * Folks Tend to Mention God When Things Come Crashing Down: Even Hillary, as in our Bob Enyart Live video here...