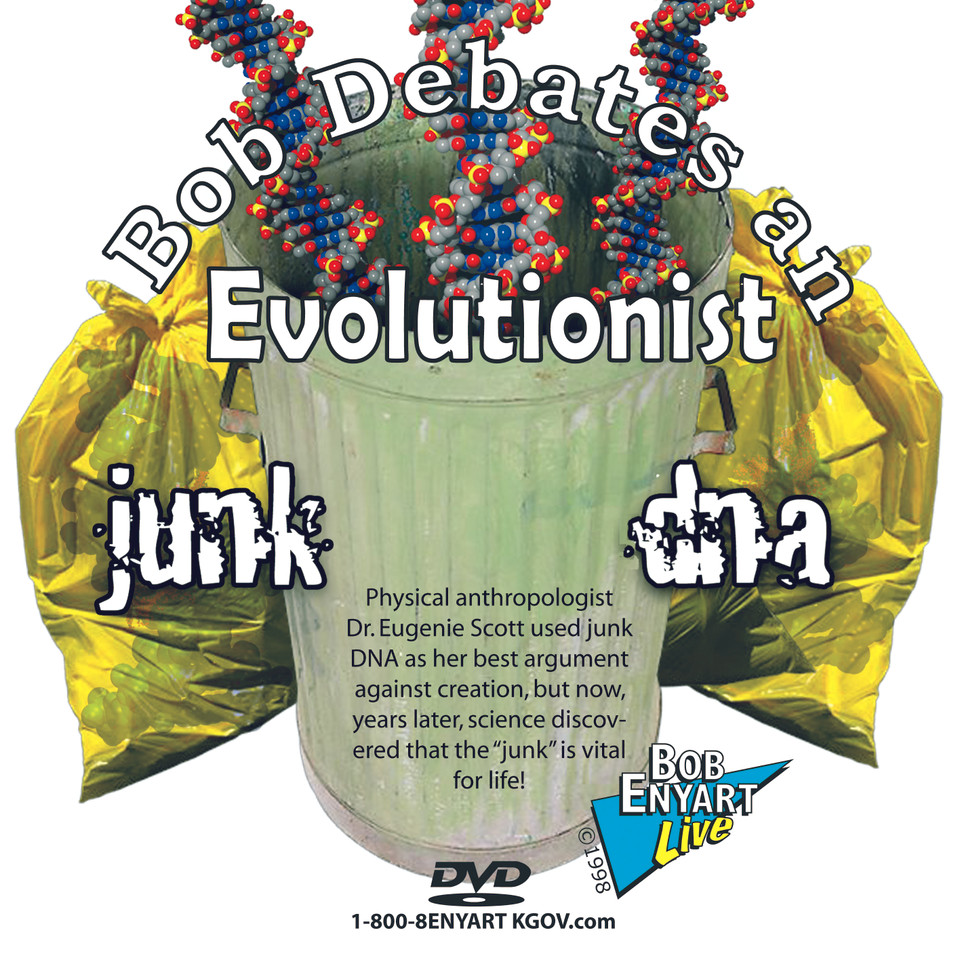 * Nature Paper Confirms RSR Rejection of 'Junk' DNA: A landmark study by 440 researchers working in 32 laboratories around the world has so far been able to identify function for 80 percent of the human genome! Real Science Radio co-hosts Bob Enyart and Fred Williams also present six minutes of audio from 1998 when leading evolutionist Eugenie Scott tells Bob that genetic scientists were "over the hump" and affirmatively knew that the pseudogenes had no function and that such junk DNA was therefore evidence against the existence of a Designer. Hear the fundamentalist Bible teacher disagree with the degreed scientist, and guess who science has vindicated?

* Hear Eugenie Scott & Bob Spar on Junk DNA: At the beginning of this radio program, hear audio from 1998 from Bob and leading anti-creationist Eugenie Scott debating the merits of the Junk DNA argument! (And see more below). Hear also physicist Lawrence Krauss acknowledge to Bob Enyart that his friend Eugenie was wrong.

* ENCODE Project Takes Out the Trash: The project leader for ENCODE (the Encyclopedia of DNA Elements) is predicting that eventually, we will learn that "100%" of the genome is functional. (ENCODE Consortium, Dunham, et al., Nature, 2012, pp. 57-74). When the scientist finally reaches the summit, he finds the theologian already there.

* Famed Molecular Evolutionist in a Tough Spot: Please pray for Dan Graur. To a young-earth creationist who has been vindicated by ENCODE (and now through 2019 with mountains of consistent data continuously rising up), Dan Graur's angst is our celebration. In 2017 he published, desperately, that based on evolutionary assumptions the human genome cannot be more than at the very most 25% functional. Oh boy. Then in 2019 he acknowledged even more bluntly:

If the human genome is indeed devoid of junk DNA as implied by the ENCODE project, then a long, undirected evolutionary process cannot explain the human genome. If, on the other hand, organisms are designed, then all DNA, or as much as possible, is expected to exhibit function. If ENCODE is right, then Evolution is wrong.

* 2019 Worm Update: Worm "junk DNA" turns out to control their ability to regenerate, says Harvard's Evolutionary Biology department. So, even with the worms Dr. Graur, it wasn't junk after all.

* RSR: Bob Debates Ph.D. Evolutionist Eugenie Scott: One of the world's leading anti-creationists vs. Bob Enyart. The debate is decided in the first round, by TKO. That’s after Bob asked the well-known scientist for any evidence that any high-level function had ever evolved, like eyesight, or hearing, or flight, or mobility in general? Through the hour-long debate, this evolutionist refused to offer any such evidence but finally settled on a claim of evidence against design, which was: junk DNA!

* JUNK DNA: Eugenie Flubs Genetics Prediction, Creationist Hits the Bull's-eye. The negative evidence that Eugenie did offer was Junk DNA. This scientist, from her Darwinist worldview, therefore didn't offer scientific evidence but made this philosophical argument about what a Creator would or would not do; namely, that He wouldn't fill our genome with so much non-protein-coding DNA. While some simple worms have 20,000 genes, it is typically a small portion of DNA that actually codes for proteins. A human has only 20,500 genes, which fills only 2% of our genome. Yet the widespread evolutionary claim for decades (including through the last two decades, and for many, still held today) was that the rest of the genome was left-over evolutionary garbage.

Debating this physical anthropologist, Bob Enyart was just a Christian fundamentalist talk show host who spoke from his biblical worldview. Bob argued that our knowledge of genetics was in its infancy, and that it was too early to make the determination that all those non-coding segments of DNA had no function. After this 1998 debate, the next decade of explosive genetic discoveries overwhelmingly validated this creationist perspective, so much so that aside from coding for 20,500 proteins, it is estimated that the remainder of the genome has approximately four million other functional regulatory segments of DNA. So much for junk. Fulfilled predictions, as the world saw with Einstein's 1919 eclipse prediction, go toward scientific credibility. However, Dr. Scott strongly rejected this creationist prediction making an extraordinary claim, which Bob immediately offered her to retract, that scientists currently knew everything they would ever need to know about genetics to conclusively state that all those regions were useless junk. Bob would love a rematch. But Eugenie Scott, (Ph.D. in Physical Anthropology, leading anti-creationist, and director of the National Center for Science Education), who had just debated evolution on a nationwide PBS television program, ended this one-hour program with Bob stating, "Well, I don’t debate."

* The Diet Pop Junk DNA Syndrome: Junk DNA = Junk Science. Junk DNA was a science stopper. The many Darwinists who strongly pushed (and many still do) the Junk DNA claim predicted that nearly 100% of the entire human genome, the portion that was non-coding, was mostly just left-over junk DNA. It's like a diet cola having NO sugar, NO calories, NO cholesterol, NO fiber, NO protein, NO carbs, NO sodium, NO fat. One wonders what in the world gives it its taste. So from the 1970s it's not surprising, assuming as they did that nearly 95% or so of the DNA was junk anyway, that evolutionists could make such sloppy claims about DNA reinforcing the Darwinian tree. However, now, with the List of Genomes that Just Don't Fit, evolutionary geneticists have falsified the claim that DNA confirms Darwinian predictions. And all that progress aside, the canard that there's nearly a 99% similarity between humans and chimps should have been falsified merely by a careful look at differences in brain and overall anatomy.

* Tossing the Wright Brothers Materials and Tools: Consider the significance of the four million regulatory regions of the human genome as compared to the relatively tiny portion that codes for proteins. The creationist Wright Brothers' design, that is, their regulatory input, so-to-speak, dwarfed the importance of the particular kinds of materials and tools that built their airplane. Other tools and materials could suffice. But all the tools and materials in the world assembled for workers who had no design to begin with would not produce an airplane. Thus the regulatory portion of the genome, including that in epigenetics, very possibly may be the more significant part. And similarly, the design concept of a nucleus itself is far more important than what specific chemistry will implement it.

* Another Bit of (Famous) Junk DNA Reclassified: (2013 Update.) First consider this analogy from astronomy. Cosmologists cannot show that a big bang could create the contents of the universe because it's impossible to formulate an explanation for the origin of something if you don't know what that something is! And 96% of what's supposedly in a "big bang universe", all that dark matter and dark energy, is of unknown composition. Thus it's no wonder that even the latest textbooks on big bang nucleosynthesis don't even mention, for example, the production of dark matter! Likewise, because geneticists have difficulty even to defining what a "gene" is (see Moran on Dawkins, for example), evolutionists have oversold their case in calling portions of a genome a "pseudogene". As it turns out, a piece of DNA spectacularly referred to as a functionless piece of junk by famed evolutionist Kenneth Miller apparently has important function, according to a 2013 paper in the journal Genome Biology and Evolution. There's a layman's explanation of this issue written by Casey Luskin. Leading evolutionists misunderstood and thus misused the beta-globin "pseudogene" to make what amounts to a religious argument about what a Designer may or may not be inclined to do. As Luskin explains, Darwinists claimed that "matching mistakes" in various species in this "pseudogene" disproved the claim of a designer. But as it turns out, those "matching mistakes" are actually conserved genetic functionality, so that like Darwinist arguments generally, this evolution claim was based on ignorance and it evaporated as science learned more. Additionally, however, (and this gets to the related question of how much marijuana is smoked by leading evolutionists) the theory of neo-Darwinism itself refutes this popular beta-globin pseudogene claim. For if this segment of DNA had no function (i.e., if it were junk) it would NOT have been conserved by natural selection! Mutations over millions of years would have altered any "mistaken" nucleotides. Thus, by the theory itself, we do not expect to see non-functioning segments of DNA with conserved sequences of junk that arose from mutations over millions of years. Thus, the fact that these segments were conserved pointed directly to their being conserved, and functional (and, by the way, to their being designed).

* Can Evolution Proceed One Small Step at a Time? If it is true that there are no "small steps," logically or physically, between monochromatic and dichromatic vision, then at least for this wildly complex vision-system upgrade, Richard Dawkins' Mt. Improbable must be scaled in one huge step. And scaling such a complexity cliff in one step, he himself admits, would be very difficult to advocate. There are no Darwin-friendly small steps between eukaryote (nucleus) and prokaryote (no nucleus), nor between invertebrate and vertebrate, nor between monochromatic and dichromatic vision. Whether you are an extinct fossil or a living species, you either have a backbone or you don't; you either have a nucleus or you don't, you might have monochromatic or dichromatic vision, or not, but you don't have something in between.

Post-show Note: Illustrating this nicely the Wikipedia article on transposons states, ironically that transposition elements, "are often considered 'junk DNA'. In Oxytricha... they play a critical role..." And from Scientific American, "The term 'junk DNA' repelled mainstream researchers from studying noncoding genetic material for many years."

Today’s Resource: Get the greatest cell biology video ever made! Getting this on DVD:
- helps you to share it with others
- helps keep Real Science Radio on the air, and
- gets you Dr. Don Johnson's book as a bonus!
Information is encoded in every cell in our DNA and in all living things. Learn how the common worldview of life's origin, chemical evolution, conflicts with our knowledge of Information Science. Finally, information Science is changing the way millions of people think about all living systems!